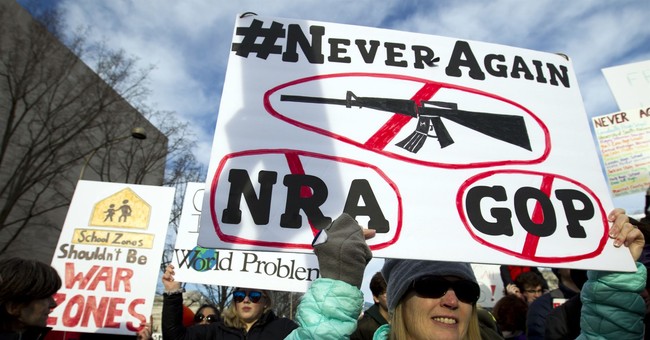 The Editor-At-Large of Esquire magazine, Dave Holmes, penned one of the most honest gun control OpEds probably ever written. Holmes comes right out and sayid it: he wants to take away our guns.

I'm Coming For Your Guns

Holmes doesn't beat around the bush. He comes out and directly says that he wants to take our guns. Every. Single. One. Of. Them.

Let that sink in for a moment.

Can you image America without the Second Amendment? It's one of two things — the First Amendment as well — that set the United States apart from every other developed nation in the world. The average citizen has the right to protect his or her own life. That's not just an important distinction but it's an important part of the American way of life.

Listen, I know the moments after a gunman opens fire in a school are hectic for you. You have to get your talking points together, you have to mentally prepare to debate a traumatized yet sensible child, you have to look at yourself in the mirror and practice saying that more guns would have made the situation less deadly. It’s a busy time! And since we are always either in the moments after or the moments before a mass shooting, you’re pretty much always busy, I have noticed!

Anyway, I just wanted to drop you a line and let you know that I now actually do want to take your guns.

All of your guns.

These notions are so asinine that I feel compelled to address them point by point.

Law-abiding gun owners don't need to have talking points handy. You know why? Because everything we do is 100 percent legal. We follow the gun laws that are on the books, even though we are adamantly opposed to some — or all — of them. We go through the National Instant Background Check System (NICS), we register our guns with the Department of Justice (DOJ) and some us even deal with the "large capacity" magazine bans.

If anything, it's anti-gunners who have to have their talking points handy. They can't even wait for the blood to be cleaned up and the victims to be taken to the hospital before they start spewing their Second Amendment-hating, anti-gun narrative. The least they could do is brush up on their firearms knowledge and gun legislation that is currently on the books. That would probably scare them though. They'd be more likely to come to the realization that the gun laws that are currently in place aren't working — and adding more to the list wouldn't change a single thing.

It's The NRA's Fault

For whatever reason, anti-gunners love to target the NRA. They must have missed the memo: the NRA isn't a single organization that's taking over the world, despite what gun control advocates will try telling you. The NRA is made up of 5 MILLION members. The NRA is made up of average citizens, like you and I, who want to protect our Second Amendment rights. We're husbands, wives, mothers, fathers, brothers, sisters. We're just like the rest of America, except we stand up and say "no more" to infringements on our God-given right to keep and bear arms.

All along, as American life has gotten deadlier, as our kids have gotten less safe in their schools, you have had the opportunity to work with the vast majority of Americans who support the sensible reform of our gun laws. You have had the chance to preserve your own rights as we work together to keep our gun regulations in step with gun technology. You haven’t.

If the vast majority of Americans agree with "sensible reform," also known as gun control, then why did the NRA and other pro-gun groups see a vast increase in membership after school shootings? It's probably because these new members knew that anti-gunners were wanting to do exactly what you say: take away our guns.

You must seem to have forgotten, gun owners compromised all of these times:

You say we can "work together" but that's utterly false. You and I both know it. You know why? Because no matter what compromises gun owners make, it will never be enough for you. The only time you will be satisfied is if every single gun in America no longer existed. The only time you would be satisfied is if one of our Constitutional protections is eliminated. Forever.

All along, there have been opportunities for sensible, incremental changes. This year alone, we could have banned the manufacture of bump stocks, which turn semi-automatic weapons into automatic ones. We could have raised the minimum age for gun ownership from 18 to 21, or instate a national minimum age for long-gun ownership. We haven’t, largely because you have bought our government.

Actually, if you did a bit of research, you would know that:

A) President Trump and the NRA both support a bump stock ban. In fact, multiple other pro-gun groups have submitted comments to the DOJ about that ban and why they oppose it.

B) Clarification: long guns can be purchased at 18. Pistols are at 21. There is a minimum age for long-gun ownership. It's 18. You just don't like the age that was chosen.

C) The NRA hasn't bought off anyone. The pro-gun organization rewards members of Congress who vote in line with protecting the Second Amendment. That doesn't mean that they're "bought off," it means that they're rewarded for sharing the same stance as the NRA's membership.

What you have done is double down. What you’ve done is convince your members that the occasional school shooting, the odd literal slaughter of innocents, is an unfortunate but inevitable quirk of American life, a thing that is necessary to preserve freedom. You have taken to our television screens to tell us that the world is an apocalyptic hellscape, and that the only way to be safe from gun violence is to stock our homes with guns.

What about the number of innocent people who fell victim to a heinous crime? Should we tell them to sit down, shut up and deal with the possibility of being attacked again?

I know what it's like to be the victim of a violent crime. I often wonder if things would have changed had I been armed. Could I have prevented my attack? I'll never know. But I sure as hell don't want to make another woman go through what I did.

The truth is the world is a scary place. You don't know people's intentions. I believed everyone is good. I was naive and that is exactly what my attacker looked for.

The young people of America are now expecting to witness gun violence in their schools. They are sitting in trigonometry waiting for the other shoe to drop, except the shoe can shoot 400 rounds a minute. That’s the result of all your hard work. There’s your prize. Stand up and take it!

Where are you buying guns that shoot 400 rounds a minute? Last I checked, fully automatic guns are illegal.

It's My Way Or The Highway

Like all anti-gunners, Holmes wants things his way. He wants the end result of no guns in America. Just look at his admission:

I was stunned and sad after Parkland. I was heartened by the efforts of the young people who watch their friends get murdered in front of them. I watched you make nice with them on CNN and then, behind their backs, call them terrorists. And then this morning I watched the same goddamn thing happen again, only this time at a high school in Santa Fe, Texas, where at least ten people are dead. As though all of the marching and organizing and common-sense talking had never happened. As though this ever growing pile of young bodies is worth nothing.

So now I’m angry. Now I’m finished trying to reason with you. So now I, a guy who was ambivalent about guns just a few years ago, want to take your guns away. All of them. I want to take them all and melt them down and shape them into a giant sphere and then push it at you so you have to run away from it like Indiana Jones for the rest of your lives. I want Ted Nugent to roam the halls of his gunless house, sighing wearily until he dies. I want to end this thing once and for all, so that all of you who have prioritized the sale of guns over the lives of children have to sit quietly and think about what you’ve done. God help me, I want to take all of your guns out of your hands, by myself, right now.

So you want to take our guns? You want to pry them from our cold, dead hands?

To that I say MOLON LABE.