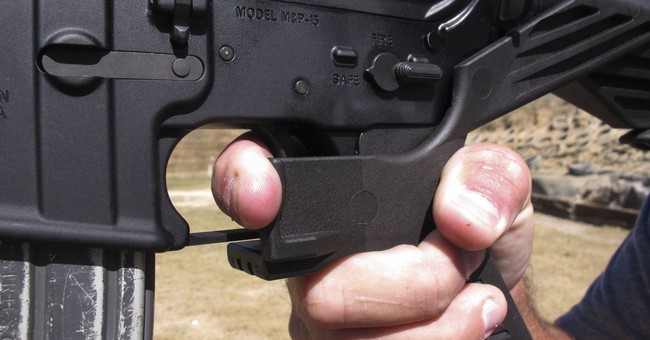 Here is the memo in full:

After the deadly mass murder in Las Vegas, Nevada, on October 1, 2017, I asked my Administration to fully review how the Bureau of Alcohol, Tobacco, Firearms and Explosives regulates bump fire stocks and similar devices.

Although the Obama Administration repeatedly concluded that particular bump stock type devices were lawful to purchase and possess, I sought further clarification of the law restricting fully automatic machineguns.

Accordingly, following established legal protocols, the Department of Justice started the process of promulgating a Federal regulation interpreting the definition of "machinegun" under Federal law to clarify whether certain bump stock type devices should be illegal.  The Advanced Notice of Proposed Rulemaking was published in theFederal Registeron December 26, 2017.  Public comment concluded on January 25, 2018, with the Department of Justice receiving over 100,000 comments.

Today, I am directing the Department of Justice to dedicate all available resources to complete the review of the comments received, and, as expeditiously as possible, to propose for notice and comment a rule banning all devices that turn legal weapons into machineguns.

Although I desire swift and decisive action, I remain committed to the rule of law and to the procedures the law prescribes.  Doing this the right way will ensure that the resulting regulation is workable and effective and leaves no loopholes for criminals to exploit.  I would ask that you keep me regularly apprised of your progress.

You are authorized and directed to publish this memorandum in the Federal Register.

It should be noted that bump stocks don't turn firearms into machine guns/automatic as the memo claims. Instead, they make the rate of fire on semi-automatic firearms faster.

Sanders said an official announcement on support for a bump stock ban will be made sometime this week. The support comes after an ATF review of the devices.

"We are committed to working with state and local leaders to help secure our schools, and tackle the difficult issue of mental health," Trump said last week. "Later this month, I will be meeting with the nation’s governors and attorney generals, where making our schools and our children safer will be our top priority. It is not enough to simply take actions that make us feel like we are making a difference. We must actually make that difference."

Our churches and schools should be refuges where children and parents feel secure. Many of these shootings can be prevented. There's no reason not to advance #FixNICS to help https://t.co/0JpZDiLPOr

On Wednesday President Trump will travel to Florida and host a listening forum with teachers, students and law enforcement officials about solutions and prevention of mass shootings.