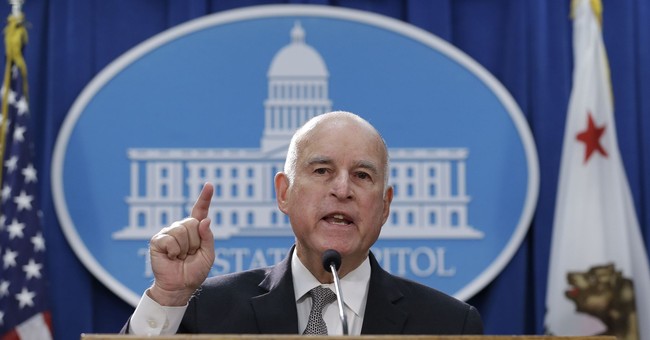 Brown plans to defeat the GOP's November ballot initiative that would end the fee and tax increases, something the governor sees as “devious, deceptive, unfair and un-Californian."

The Daily Bulletin explains what the one-year old bill aimed to accomplish:

At stake are $52.4 billion over 10 years from the tax known as SB-1 for fixing potholes, repairing hundreds of bridges, resurfacing roads and freeways, adding new rail service, bikeways and electrified buses and goods movement equipment at the ports that supporters say will reduce traffic congestion and move the state closer to its goal of reducing greenhouse gases 40 percent below 1990 levels by 2030.

SB-1 added 12 cents and 20 cents per gallon of gasoline and diesel fuel, respectively. The vehicle registration fees rose $25-$175 depending on the age of the automobile. Electric car owners will pay a $100 fee starting in 2020.

One of the people leading the charge is Republican gubernatorial candidate John Cox, who was recently endorsed by President Donald Trump.

We're holding Organizing Meetings in every region of California for the Gas Tax Repeal Campaign. Here's the initial list - sign up OR host one nearer to you! https://t.co/hBFKoxFJwh pic.twitter.com/Msqi4q04P2

According to Fox News, Republicans are dumping big money into the repeal efforts:

House Majority Leader Kevin McCarthy and other top Republicans are putting big money behind an effort get an initiative on the November ballot to repeal the new state gas tax. They hope the effort to rally GOP voters to the polls in opposition to the increase will also help thwart Democrats' efforts to win a handful of Republican-held seats across the state, toward the larger goal of taking the House.

McCarthy, R-Calif., has given $300,000 to the repeal initiative, which consists of the groups Give Voters a Voice and Reject the Gas Tax, according to Ballotpedia. They have collectively raised $2.19 million.

The top five people who have contributed money towards the gas tax repeal efforts include: