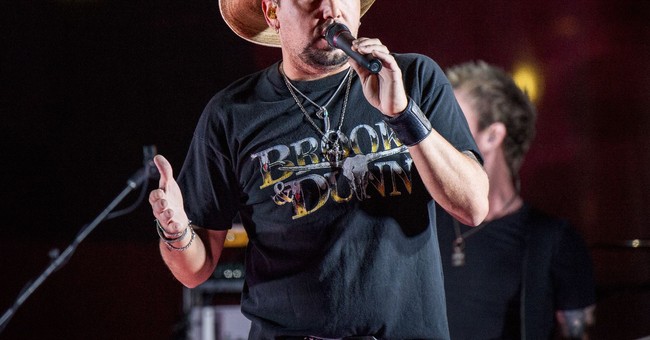 Just a little over six months ago the Las Vegas Massacre took place at Route 91 Harvest Festival. The shooting is said to be the deadliest mass shooting in modern history, that left 59 dead and hundreds injured.

Now, Jason Aldean, the country music star who was performing when the shooting broke out, has finally ended his silence on the gun debate.

For months people have wondered what Aldean thought about gun control and whether or not stricter legislation and regulation needed to be put in place. According to the country singer, he's avoided talking about the subject because "it's a no-win situation," Aldean told the Associated Press.“I think no matter what you say, whether you’re for gun control or not, I mean, you’re setting yourself up to be crucified in the public eye or in the media.”

Although Aldean is a gun owner himself, he believes there are loopholes in current gun laws.

“It’s too easy to get guns, first and foremost,” Aldean told the AP. “When you can walk in somewhere and you can get one in 5 minutes, do a background check that takes 5 minutes, like how in-depth is that background check? Those are the issues I have. It’s not necessarily the guns themselves or that I don’t think people should have guns. I have a lot of them.”

Although he was happy that the 40 members of his band and crew, along with his pregnant wife, were okay, the country star struggled to make sense of the situation.

The days after the shooting took place Aldean spent his time visiting those who were hospitalized as a result of the shooting. Guilt plagued him because people were standing there, listening to his music, when they were shot at.

“Jason would walk in and somebody who had been shot in the arm, leg, face or wherever would just start crying because it was such an emotional thing to see him,” Aldean's longtime manager, Clarence Spalding, recalled.

One woman was in a coma when Aldean visited. She recorded a video message to her, promising he would have her come to one of his shows once she fully recovered.

Looking back at the shooting, Aldean says visiting victims helped him cope with what happened.

“Going back to the hospital, going back to Vegas and seeing those people. Seeing some of the strength they were having. People laid up in the hospital and smiling and laughing and just being glad they were alive. That sort of stuff helped me to look at it in a different view,” Aldean said. “Those people are here and pushing on.”

Although Aldean says he struggles with taking a position on gun control one way or another, he wants people to know that it's easier to talk about a shooting if you've never been part of one or you never endured that kind of trauma.

“Unless anybody has witnessed anything like that or been a part of it, it’s really hard for people to really understand where you’re coming from on that stuff,” he said. “It’s like the kids from the school in Florida, that shooting. I get it, man. I understand how they are feeling.”

Part of the reason Aldean struggles with talking about the shooting is that he worries about the political arguments about gun control that ensue.

“Nobody is looking at what the actual issue is and really how to come to an agreement and make a smart decision,” Aldean said.