Roseanne Gets Roasted at the Emmys 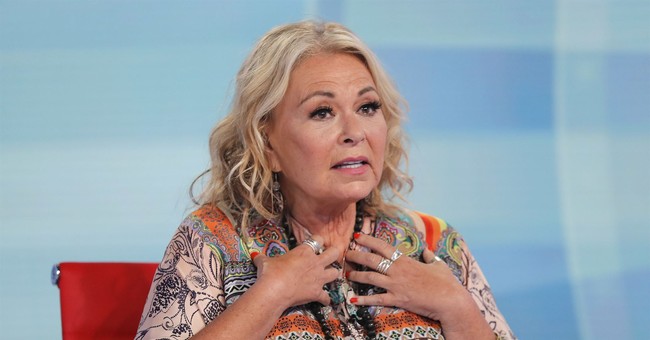 Last year it was Harvey Weinstein. This year, Roseanne Barr is the target of the award show season. Several presenters poked fun at the disgraced comedian onstage at the Emmy Awards Monday night. Barr fell from grace earlier this year for sending an inappropriate and racially charged tweet about Valerie Jarrett, former adviser to President Obama. It came at a terrible time. Barr had been enjoying her show's reboot success, which was bringing in some serious ratings for ABC. But she was fired by the network after the now infamous tweet.

Hollywood readied its punchlines. Emmy hosts Colin Jost and Michael Che, who are normally behind the Weekend Update desk every weekend on "Saturday Night Live," got the ball rolling.

Then this from Michael Che:

"Roseanne says she is moving to Israel...how messed up do you have to be to move to the Middle East to get some peace of mind."

Even when they were commending Roseanne's costar and former Oscar nominee Laurie Metcalf, the hosts had to poke more fun at the show.

"Congratulations to Laurie Metcalf. You know how great an actress you have to be to nominated for Roseanne now? That's like a cop being nominated for a BET Award."

Barr has apologized for the tweet, but insists it wasn't racist. Her beef with Jarrett was about the Iran Deal, not the color of her skin or ethnicity, Barr told Fox News's Sean Hannity.

Although Roseanne was canceled, ABC is moving forward with the spinoff series The Conners. On Monday, Barr revealed that her character is going to be killed off of the series by an opioid overdose.

If you're wondering whether the hosts directly jabbed the president in their monologue, the closest they came was this line, where they reflected on the first Emmys show in 1949: