Young Voices Contributors
|
Posted: Sep 10, 2019 12:01 AM
Share   Tweet
The opinions expressed by columnists are their own and do not necessarily represent the views of Townhall.com. 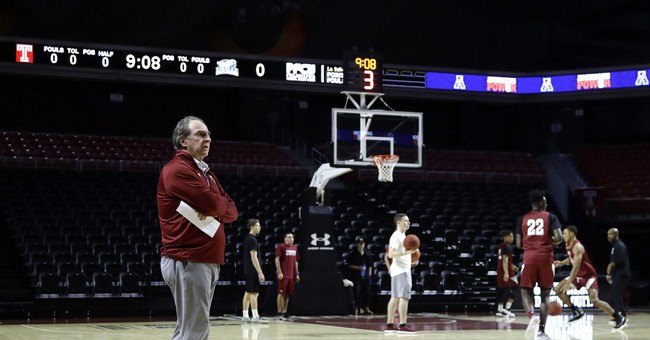 This piece was authored by Young Voices contributor Natalie Dowzicky.

In a recent Atlantic piece, Jemele Hill, former ESPN host-turned-sports writer, made a call to action that has sparked fire on social media: “It’s Time for Black Athletes to Leave White Colleges.”

Hill is angry, and it’s understandable. Thirty Division I schools, predominantly white institutions, rake in about $100 million annually — largely because of their black star athletes. Hill is fed up, which is why she’s urging athletes to make an intentional move to historically black colleges or universities (HBCUs). The shift, she argues, “would boost HBCU revenues and endowments,” “stimulate the economy of the black communities in which many of these schools are embedded,” “amplify the power of black coaches” and “bring the benefits of black labor back to black people.”

That certainly sounds fair. I, too, want black people to see returns on their own labor, but the way she suggests that happens isn’t going to work. The NCAA is a cash cow that exploits all athletes — blacks and whites alike. If black athletes choose to segregate themselves so that HBCUs can reap the benefits of their talent, the HBCU wins. Of course, the athlete still loses. To remedy this system of exploitation, athletes should be paid. They certainly deserve it.

The NCAA argues that, in not paying its athletes, it’s trying to protect the integrity of their’ educations. Here’s the thing: almost none of the athletes who are good enough to bring in revenue to an institution have the time to prioritize their education above their athletic status. And there isn’t an inverse relationship between receiving a paycheck and doing homework. Many student athletes (like me) have to take jobs on top of their academic and athletic commitments in order to fund themselves, which is, by no means, letting them “prioritize education.”

It’s also not hard to find examples of scandals the NCAA has endured over how little it lets its students focus on school. Most notably, it allowed UNC to award 18 years worth of degrees in fraudulent majors. Who majored in and attended these fake classes, you ask? Student-athletes.

In the 2016-2017 school year, NCAA revenue reached $1 billion for the first time, of which 90% was made off of March Madness through ticket sales and television contracts. The NCAA gave $560.3 million back to its 1,100 members—essentially every college in the U.S. that has athletic programs. But the players who drive this revenue don’t receive nearly as much as they bring in.

Some argue that student-athletes receive upwards of $125,000 over four years through benefits that take the form of scholarships, housing expenses, meals, access to trainers, and the like. But this is a very generous estimate, and even then it doesn’t justify the NCAA profit margin.

The average student-athlete spends 35-40 hours a week engaged in their sport to some capacity, primarily with mandatory practice time, but also with exercises like treatment and recovery. That’s nearly the hourly expectation of a full-time job. And since they aren’t paid, they’re understandably attracted by all the perks of the elite institutions, the impeccable facilities and the large supportive fan bases. Of course, HBCUs don’t have much to offer these high-level athletes in comparison. Hill even quoted freshman defensive end for the University of Oregon Kayvon Thibodeaux in saying, “Nobody wants to eat McDonald’s when you can get filet mignon.” And why should they?

But if universities started signing paychecks, it’d be a different story.

Instead of expecting black athletes to bite the bullet and go to schools they aren’t drawn to out of moral obligation, HBCUs could start enticing black athletes to their schools through pay. And if elite institutions were to lose money, they’d have good reason to buck the NCAA’s amateurism rules, too. If every school eventually goes to a pay-for-play model, the market for black athletes would become extremely competitive. Yes, perhaps they’d still choose to go to the elite schools, but they also wouldn’t find themselves penniless if they chose otherwise.

As it stands now, HBCUs have very little to offer star athletes. But it doesn’t have to be this way, and we don’t need to guilt them into segregating themselves to prove a point. Do them one better—give them money to buy groceries when they’re off the court.

Natalie Dowzicky is a researcher a Washington D.C. think tank and a Young Voices contributor. Her work has appeared in the Washington Examiner, the American Conservative, the National Interest, Townhall.com, and more. Follow her on Twitter @Nat_Dowzicky.