Rewriting History: Lies that Hurt Us All 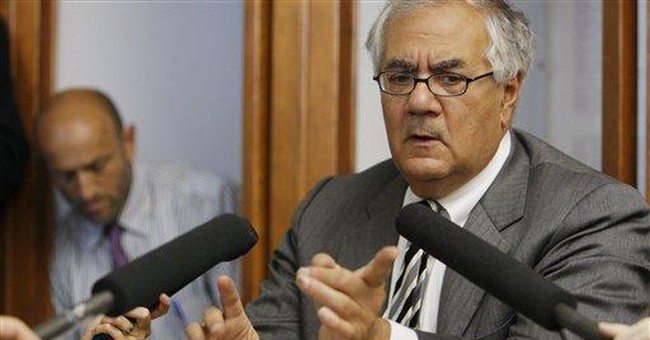 As Congress and the Administration work to prevent the crisis in the financial sector from spilling over into the larger economy, the vultures are swarming. In an Associated Press article yesterday, the following quote is made by Barney Frank, ultra-liberal Democrat of Massachusetts:

“The private sector got us into this mess…The government has to get us out of it. We do want to do it carefully.”

This is obscene. This “mess”, as Congressman Frank so eloquently put it, is the fault of government pure and simple. And, it is the personal fault of Barney Frank. For him to now hide his near-criminal behavior by pointing a finger at the entire private sector is the height of arrogance.

Under rules implemented by the Clinton Administration in 1995, banks and mortgage companies were required to give loans to people who could not afford them. This scheme was welfare pure and simple—hand over money to people everyone knew would not be able to pay it back. The banks and mortgage companies did as required. Otherwise they would face stiff penalties and possibly lose their license to operate. So, they gave out the money to put people in homes they could not afford.

But the banks had to get the money from somewhere. They got it from Fannie Mae and Freddie Mac, the two failed quasi-government organizations. Fannie and Freddie urged, encouraged and bullied banks to give out more and more high-risk loans. They then bought these bogus mortgages and sold them to investors, again with the implied backing of the U.S. Government.

So, why wouldn’t an investment firm not buy these securities? After all, they were marketed as having the backing of the U.S. taxpayers.

• In 2000, then-Rep. Richard Baker proposed a bill to reform Fannie and Freddie's oversight. Mr. Frank dismissed the idea, saying concerns about the two were "overblown" and that there was "no federal liability there whatsoever."

• Two years later, Mr. Frank was at it again. "I do not regard Fannie Mae and Freddie Mac as problems," he said in response to another reform push. And then: "I regard them as great assets."

• Again in June 2003, the favorite of the Beltway press corps assured the public that "there is no federal guarantee" of Fan and Fred obligations.

• A month later, Freddie Mac's multibillion-dollar accounting scandal broke into the open. But Mr. Frank was sanguine. "I do not think we are facing any kind of a crisis," he said at the time.

Three months later he repeated the claim that Fannie and Freddie posed no "threat to the Treasury." Even suggesting that heresy, he added, could become "a self-fulfilling prophecy."

• In April 2004, Fannie announced a multibillion-dollar financial "misstatement" of its own. Mr. Frank was back for the defense. Fannie and Freddie posed no risk to taxpayers, he said, adding that "I think Wall Street will get over it" if the two collapsed.

Pretty clear. It was not the “private sector” failing as Congressman Frank declared. It was government that failed. Specifically, it was people like Barney Frank that failed the American people. Moreover, he committed these acts for a pure ideological reason—to advance his warped left-wing vision.

But it goes deeper still. By attacking the entire “private sector”, Frank is declaring his opposition to small business and to tens of millions of people who labor for the betterment of their families by saving and investing.

The central issue of the proposed bailout proposed by the Bush Administration—the issue that prompted Barney Frank’s childish and insulting remark—is how to get billions of dollars securities based on the mortgages held by people who cannot afford them out of the system. You can argue over whether to do it or how to do it—but that is the aim of the proposal.

And what does Comrade Frank now insist is a deal-breaker? More money has to be made available to keep these people in the homes they couldn’t afford in the first place! Oh, and of course, many on his side are demanding that state and local governments who have been spending at double-digit increases every year for a decade be bailed out as well. No, they shouldn’t have to cut the feather-bedding or cut back on the silly-expensive union contracts. Barney Frank wants the American taxpayers to bail them out too.

Taking the global view, here is what happened and this is where we are. Knowing the American people were sick and tired of the welfare handouts, the liberals devised a backdoor way to funnel billions of dollars to their welfare clients. It was based on a Ponzi scheme that finally went broke. A lot of people made money along the way but the central rationale was always to transfer hundreds of billions of dollars in welfare to low income citizens.

And now that the game is exposed, the first thing these thieves do is blame the “private sector.” They are using the destruction they have caused to justify giving them more power to do even more damage.

That is what is at stake. Will we hand our country over to a group of devious, venal socialists who hate private enterprise, individual responsibility and personal freedom? Or, will we step back from the abyss, clean up the mess and set our house in order?

If he has done nothing else, Barney Frank has at least clarified the issues and made the choice clear for all willing to observe the facts. As valuable a service as this is, it should not be enough to keep him out of a well-deserved jail cell.