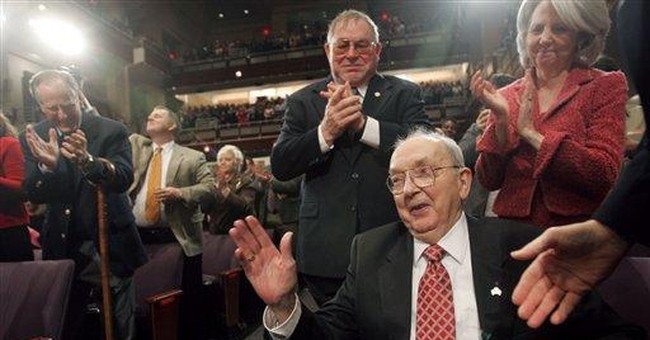 Former Sen. Jesse Helms, who died last Friday at 86, was one of the true giants of conservatism during his 30 years in the U.S. Senate.

Many a politician becomes identified with one political viewpoint or another, which he or she serves loyally during decades in public office. But only a few manage to put their mark on major aspects of public policy, by which thereafter they are historically identified. Helms was one of those few.

To note, therefore, that Helms was a conservative, and indeed even a particularly influential one, simply doesn't do justice to the man. For millions of Americans, he exemplified the type, and he left his stamp indelibly on the politics of his time. It can be argued persuasively, for example, that in delivering his state of North Carolina for Gov. Ronald Reagan of California in the Republican presidential primary of 1976, after Reagan had suffered a series of defeats at the hands of incumbent President Gerald Ford, Helms enabled Reagan to remain a force in Republican politics, and eventually to win both the nomination and the election in 1980.

And certainly Helms's creation and leadership of what came to be known as the National Congressional Club brought into play an organization that had a powerful effect on the country's politics, backing conservative Republican candidates in scores of states.

Finally, in the Senate, and especially as chairman of its powerful Foreign Relations Committee, Helms played a major role in supporting Reagan's conservative foreign-policy initiatives. His support for aid to the Nicaraguan contras, to take just one example, was probably indispensable in enabling Reagan to back them effectively.

For all his power, Helms in person was a warm and friendly man -- almost the archetype of the Southern gentleman. He never lacked a kind word for his friends. I will always remember fondly the time when he told a group at my birthday party that "I had a nodding acquaintance with Bill Rusher before I even met him" -- and then added with a twinkle, "I'd hear him on television, and I'd nod."

Helms didn't mind exasperating his Senate colleagues in what he considered a good cause. The Senate rules require unanimous consent for all sorts of time-saving procedural steps, and when Helms wanted to block a particular action he would sometimes give vent to a loud "No!" even if he was the only objector. This earned him the sobriquet "Senator No," which he, typically, regarded as a badge of honor.

Needless to say, such a personality generates both devoted friends and undying enemies. Helms had plenty of both. But the Senate needs such types, quite regardless of whether their personal politics happen to be liberal or conservative. It is all very well to serve one's principles quietly, as one of an obedient herd. But it is the mavericks like Helms that give priceless zest to a body like the Senate, and it would soon die of boredom without them.

After three decades in the Senate, and in declining health, Helms knew it was time to go. So in January 2003, determined not to overstay his welcome, as so many senators do, he stepped down. The last time I saw him he was in a wheelchair, and he was well aware that his career was ending. Thereafter, his health declined further, and on the Fourth of July, 2008 -- was that a final patriotic gesture? -- he died.

One doesn't have to be an admirer of Helms's politics to honor his patriotism and his adherence to principles. America needs men like him, and we are diminished by his loss.