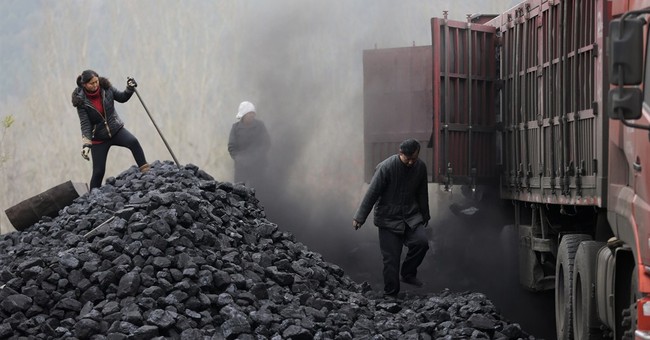 Coal provides nearly 200,000 jobs and 40 percent of the nation’s power, but it’s despised, along with other forms of energy, by environmentalists who want to stop using it entirely. Given the real consumer costs of their campaign, could there be a more deserving candidate for getting some black lumps in their stockings?

It’s not just coal that Big Green is out to destroy. Natural gas is also in their sights, with environmentalists funding protests and lobbying efforts to ban this source of energy. And nuclear power? That’s also on their hit list. Even hydroelectric power, garnered through dams, draws their scorn.

Altogether these four sources provide 92 percent of our nation’s energy, according to the Energy Information Administration. The national switch to “renewable” energy—wind and solar—would require a Christmas miracle to make up what these conventional sources provide America.

Wind and solar are far from the utopia that the green movement makes them out to be. The sun doesn’t always shine and the wind doesn’t always blow. Ironically, in the downtime in energy production that a solar facility has, it may use natural gas to make up the difference. Americans need a certain amount of energy at any given point in time—and a fluctuating supply would leave the Xmas tree lights flickering.

A study out of the UK, meanwhile, pegs an environmental cost to wind and solar. To produce the same amount of energy, wind requires 700 times more land for those wind turbines than a natural gas well. And solar? Four hundred and fifty times more land for all those solar cells pointed at the sky.

Renewable energy is less efficient, and it lives on taxpayers subsidies. And it’s not necessarily easy to build, either—even renewable energy production can draw the ire of environmentalists. A planned solar facility in a California desert was recently rejected by the feds after complaints from groups that it would hurt habitats for wildlife.

One green group, the Arizona-based Center for Biological Diversity, files lawsuit after lawsuit to gum up attempts at energy development. “We will have to inflict severe economic pain,” one co-founder of the Center has said, while another would advocate bringing "industrial civilization to its knees.” Amazingly, taxpayers occasionally have to pay for the legal fees of this group.

Our Christmas Future won’t be better off by listening to activists whose vocabulary consists of the word “no”—especially those who bemoan carbon emissions from fossil fuels on one hand, and then oppose carbon-free nuclear power on the other.

Energy has allowed our country to thrive. Just think about the number of cars, iPads, laptops, research labs, computer servers, and other energy consumers plugged into the grid that have allowed us to advance and improve our quality of life—all while there’s been a steady decline in air pollution over the last three decades (something you’ll never hear from fear-mongering environmentalists).

The U.S. has an abundance of coal that can meet our energy needs and more, enough to make us an exporter. We have an abundance of natural gas. We’re developing more and more oil, which reduces our dependence on foreign sources. We’ve really just scratched the surface of what the planet can provide. There’s no good reason to turn back the clock.

Even NASA’s top climate scientist—and no fan of fossil fuels—has noted that believing that solar, wind, and water energy can meet all the world’s energy needs is akin to “believing in the Easter Bunny and Tooth Fairy.” Or a fat and jolly old man delivering presents.

Santa’s reindeers may run on a bit of magic, but Americans require energy to run their cars, heat their homes, and keep the economy running smoothly. A little reminder for the folks who aren’t so cheery about our progress.