Will Alexander
|
Posted: Sep 16, 2019 12:01 AM
Share   Tweet
The opinions expressed by columnists are their own and do not necessarily represent the views of Townhall.com. 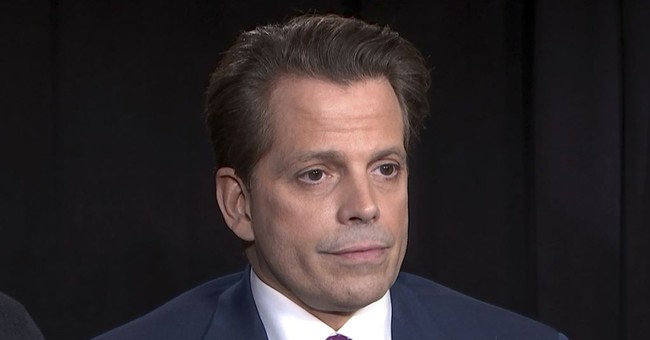 Anthony Scaramucci turned on Trump.  Did you notice?

Scaramucci, a short former Trump staffer with a short White House stint, is promising a long campaign to dump Trump.  He’s making the media rounds at home – and worse – abroad, to call the President of the United States “horrific and despicable,” a “narcissist," an “orange maniac” and “sedated.”

He called Trump’s G-7 performance “an unmitigated disaster." He supports using the 25th Amendment to remove Trump and said he’s “totally incapable of handling” the job, that Trump supporters need to be deprogrammed and the GOP is a “personality cult party.”

And he wasn’t done.  Scaramucci called the president a “fascist” and a “racist” who’s having a “full-fledged mental breakdown. It is literally like Joe McCarthy and Roy Cohen got together and had a baby, and the baby was Donald J. Trump.”

Oh yes – and he said he’s not bitter.

Scaramucci is starting to remind me of the hunchback, Ephialtes of Trachis, in the movie “300” who betrayed Sparta and joined the Persian Army after King Leonidas rejected him.

In a surreal version of the true story, Ephialtes followed the 300 Spartans over treacherous terrain from a distance as they marched to fight the Persian Army at a narrow pass at Thermopylae, nicknamed the “Hot Gates.”

When Ephialtes caught up with the Army, he kneeled and made his pitch to the king.  He begged the king to let him join the fight against the formidable Persian Army.  He even demonstrated the Spartan sword thrust that his father taught him.  Leonidas was impressed.

“Raise your shield,” the king commanded.

“Raise your shield – as high as you can.”

The hunchback struggled but couldn’t lift his shield.

“Your father should have told you how a phalanx works,” the king said.  “We fight as a single, impenetrable unit; that is the source of our strength.  … A single weak spot, and the phalanx shatters. …  I am sorry, my friend. But not all of us were made to be soldiers.”

Sadness overwhelmed Ephialtes. Then anger. Then rage and revenge.  Then he snapped.

He was so blinded by his personal animosity that he betrayed all of Sparta to the Persian Army. Ephialtes’ betrayal at the Battle of Thermopylae in 480 B.C. is how his name came to mean “nightmare” in Greek.

Government officials parting ways with the president’s team is nothing new.  They publicly express gratitude for having the privilege to serve and keep a low key, understanding that they served at the pleasure of the president.   We’ve seen nothing like Scaramucci.   It’s like Rachel Maddow and Lawrence O’Donnell got together and had a baby, and that baby was Anthony Scaramucci.

Scaramucci said his “red line” was when Trump sent a “racist and unacceptable” tweet telling the four congresswomen (the Squad) to go back to their countries if they don’t like ours.  He told CNN’s Jake Tapper that the comments were reprehensible and his Italian grandparents would be “wickedly upset” with him if he didn’t speak out.  So, he upset Trump instead.

First of all, the tweet was not racist; it was patriotic.  Trump’s sentiment was no different than telling Barbara Streisand, or some other celebrity, to go live in Canada or someplace else when they threaten to leave if a conservative they hate gets elected.  Before Trump sent the tweet, I must’ve yelled at the television 50 times for “The Squad” to go live somewhere else if they hate the country so much.  As usual, Trump said what many of us were already thinking.

So, Scaramucci attacked him.   Trump, who was falsely accused of being a white supremacist, fascist and racist every day for three years now, counterpunched.  The “Mooch” has been barreling down the road to political oblivion ever since.

His reckless vendetta has nothing to do with principled politics, or with saving the country from a “diseased dad,” as he puts it.  It’s about Scaramucci not being able to “raise his shield” high enough to cover his bruised ego.  No matter how hard he soaks his language in the fragrance of principled politics, his overreaction to Trump’s tweet stinks to high heaven.

It’s a shame, too, because Scaramucci’s no dummy.  He graduated from Tuft University with a Bachelor’s in economics.  He earned a J.D. from Harvard Law School.  He founded a successful global alternative investment firm, wrote four books, and is estimated to have a net worth of $200 million.

What makes Scaramucci’s revenge so egregious and petty is, like the Battle of Thermopylae, it comes at a time when America is in a consequential ideological war where – to win – the source of our strength is to fight as a “single impenetrable unit” against formidable forces.  Civil War is not coming to America; it’s already here.  And we’ve lost whole institutions to the enemy forces already.

So Scaramucci, let it go.   We elected Trump.  We know he’s “crazy” – that’s why we hired him.   He was the axe behind the glass that we broke because the country was in an emergency.  It still is.  The man has such sharp elbows because, well ­– he’s an axe!  In the insane times we’re living in, “presidential” is not as important as getting America’s dilapidated institutions repaired or replaced.

The “presidential” and genteel types have, for decades, exposed the country’s load-bearing walls to an infestation of political termites that made major institutions rotten to the core.  For decades, the dignified ones just painted over things.

He’s president, but more of a general contractor.  Obama had a phone and pen. It didn’t work. Trump has a hammer, a saw and a chisel to demolish the rotten structures, fix what’s salvageable and build what’s needed to keep the house from collapsing.  It’s working.

For us, Scaramucci, this was never about Trump; he just happened to say what we were saying.   Trump’s election was about pushing back against the irreconcilable differences we have with liberals, leftists and progressives over fundamental moral and political issues that could leave this country on the ash heap of history.

In a vast sea of whale-sized issues we’re facing, your beef with Trump is just a shrimp.  The longer you go with this “the guy is a fascist” bit, the more likely you’ll chisel yourself into history as an angry little man, embittered by the “king’s” rejection – just like Ephialtes.