Wes Martin
|
Posted: Sep 30, 2020 2:01 PM
Share   Tweet
The opinions expressed by columnists are their own and do not necessarily represent the views of Townhall.com. 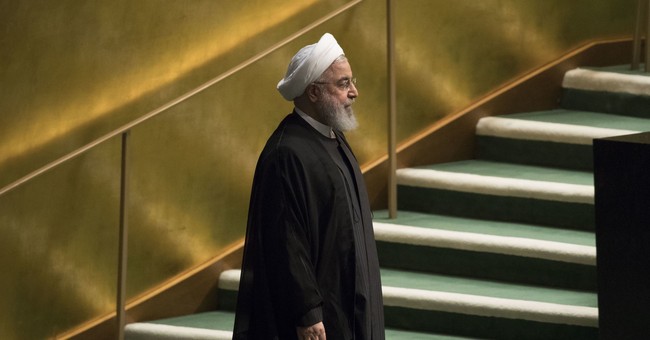 For decades, the Iranian government has avoided judicial accountability as the No. 1 nation-state sponsor of international terrorism. This will end on November 27, 2020 in Antwerp, when Belgium’s criminal court commences proceedings against senior Iranian diplomat, Assadollah Assadi.

In June 2018, as third secretary in the Iranian Embassy in Vienna, Assadi delivered over half a kilo of Triacetone Triperoxide (TATP) to Iranian sleeper agents in Luxembourg. TATP is a high explosive used in bombs, suicide attacks, and improvised explosive devices.

The target was a major international gathering near Paris, in support of the National Council of Resistance of Iran (NCRI). The plot was averted just a few hours before being implemented, as two of the bombers were arrested in Brussels on the morning of June 30, 2018 as they were on their way to the French capital. The explosive device detonated while a Belgian police robot was trying to defuse it.

This was the second failed Iranian plot against the Resistance in less than four months. The previous March, Albanian police foiled a car-bomb attack against the Iranian New Year’s celebration in Tirana by the People’s Mojahedin Organization of Iran (PMOI/MEK), the main Iranian opposition movement and the main component of the NCRI. Albanian Prime Minister Rama subsequently expelled the Iranian ambassador and his second-in-command.

After decades of oppression against its own people, pressure had been building on the Iranian government. American appeasement by the Clinton, Bush, and Obama administrations had come to an end.

The appeasement was at its worst in 2009, 2011, and 2013 when Iran’s puppet government of Nouri al-Maliki in Iraq attacked Camp Ashraf, located 50 miles northwest of Baghdad. Hundreds of Iranian dissidents were killed and wounded. In every case, the Obama White House and Hillary Clinton State Department defended the Maliki government, even to the point of denial despite film footage and photographs to the contrary.

Camp Ashraf had been home to the MEK, the Iranian dissidents since 1986. The MeK became the protective responsibility of the U.S. military after the fall of Saddam. That remained in place until 2009, when Secretary Clinton turned MeK security over to the Iraqi government despite warnings from previous American commanders of the camp, of which I was one.

Nothing was going to get in the way of Obama and Clinton appeasement of Iran and, in turn, development of the Joint Comprehensive Plan of Action (JCPOA). Once John Kerry became Secretary of State, successful actions were put into place to move all Ashraf residents to a new compound north of Tirana, Albania.

Unfortunately, Secretary Kerry did proceed forward with the Iranian-favored, one-sided Nuclear Weapons Deal, which was signed in 2015. Recognizing the continuing Iranian research and development toward nuclear weapons, President Trump cancelled the agreement and reactivated sanctions against Iran in 2018.

Iran’s Supreme Leader Khamenei and President Rouhani became desperate. Citizen riots within Iran commenced in December 2017 and are still ongoing inside the country, attacking government buildings and facilities. Still, Khamenei’s two biggest threats to power continue to be the Paris-based NCRI and MeK in Albania.

Without success, in January 2018 Rouhani telephoned President Macron, requesting France curb NCRI/MeK activities, claiming they were the cause of discontent in Iran. Macon is a smart leader and recognizes Iranian problems are the result of an oppressive regime led by Ayatollah Khamenei.

Whenever their power is threatened by internal overthrow, the regime resorts to two measures. The first is brutal oppression of the Iranian citizens, including imprisonment and mass execution; the second is committing a terrorist attack against the Iranian government’s perceived enemies, attempting to create nationalistic support against a foreign threat

Attacking the Paris rally was a bold plan. Led by NCRI President-elect Maryam Rajavi, the event hosted tens of thousands of Resistance supporters. This mass-murder attack on French soil would send a message to Macron for his refusal to give in to Rouhani. An added bonus for Khamenei would be the potential killing of the rally’s international attendees, including Rudy Giuliani, Newt Gingrich, and Stephen Harper.

What Khamenei, Rouhani, and Assadi failed to take into account was European law enforcement efficiency.  The detection of the explosive device by Belgian police immediately activated criminal justice agencies throughout the continent. German police apprehended Assadi during his automobile flight as he was nearing the Austrian border.

Assadi attempted to claim diplomatic immunity, in vain, because his immunity did not extend to Germany, where he claimed being on vacation. During the following months, the Iranian regime's embassy in Germany futilely went out of its way to prevent his extradition to Belgium. A few months after his arrest, the EU registered on its terrorist list Assadi and his superior in rank, vice-minister of intelligence and security of the Islamic Republic.

Now the day of justice is coming for Assadi and his three accomplices. The charges are terrorism and attempted murder.  Also, indirectly on trial will be Khamenei and Rouhani for ordering this failed mass slaughter. This trial will be a blow to their influence, inside and outside Iran. Unfortunately, their day of justice will have to be delayed until the eventual, but certain, collapse of the Iranian government.