Nothing Left to Steal

Wes Martin
|
Posted: Jun 04, 2020 12:01 AM
Share   Tweet
The opinions expressed by columnists are their own and do not necessarily represent the views of Townhall.com. 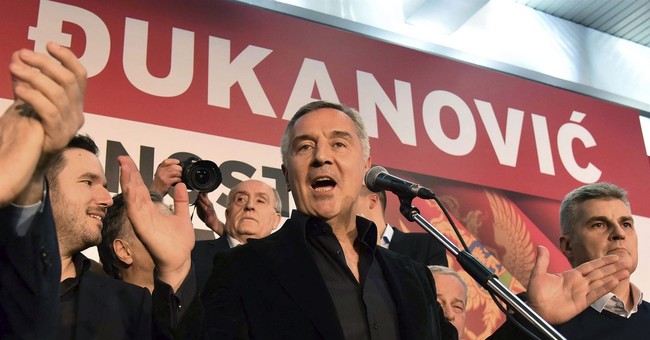 As Europe’s longest ruler, it is a surprise that Milo Djukanovic is only 58. He has served as prime minister or president of various iterations of Montenegro since 1991 – spanning the collapse of Yugoslavia and across and beyond independence of the nation in 2006.

What is the secret to Mr Djukanovic’s success? The answer is depressingly predictable: clientelism and the buying – or, depending on your perspective, stealing – of power.

The beauty of Montenegro hides this ugly truth. Most know it as a tourist idyll with pristine beaches, crystal lakes and picturesque mountains. But holidaymakers rarely realize they enter less a country, more a private fiefdom, run for the benefit of the president and the small coterie that surrounds him.

If not well known, his graft and links to the mafia are well documented. He has been the inglorious recipient of the award for “Man of the Year in Organized Crime and Corruption”, and Freedom House has downgraded the country from new democracy to a hybrid authoritarian regime. Yet of late, Mr Djukanovic has run into a new challenge. The pot that feeds the partisans has been chronically depleted: the cupboard is bare.

Adept at reinventing both himself and law supposedly bound by the constitution, he has decided the property of Serbian Orthodox Church should now instead be that of the state. Despite its name, the world’s second oldest Slavic Orthodox Church is not a national one – a foreign adversary the Mr Djukanovic is squaring up to – but home to millions of followers spread across the entirety of the Balkans, as well as worldwide. It is the majority church followed by 80 percent of Montenegrins. And it precedes the countless borders and countries that have been drawn and redrawn through the ages across the region.

It was therefore an audacious decision. Yet how would it be possible to seize the legal and sacred land of the church? Simple. Mr Djukanovic changed the law. Though not before arresting opposition MPs who were against it.

Last December, the Law on Religious Freedom sailed 45–0 through a Potemkin parliament. Although absent in the chamber, opposition was evident for all to see. Sixty thousand alone flooded the streets of capital Podgorica – some 10 percent of the entire population – demanding its recall. This was not a minor religious technicality buried in the obscurities of legislation, but an issue of national importance. The size revealed a solidarity against the state-sponsored theft of which Montenegrins have grown painfully weary.

Under the unconstitutional law, religious communities must prove the ownership of property built before 1918, all of which require registration with the state. However, in reality, this clause applies only to the Serbian Orthodox Church. Other far smaller religious micro-communities have distinct and special treaties with the state that protects them against these diktats.

At first, perhaps, the law may seem innocuous. Especially in the Balkans, because of the very complexities of history and shifting powers of Ottoman Caliphs, Kings and Communists their modern successor nation states should be open to the contestation of land deeds. This, in any law-bound country, is undeniably true: disputes should and are heard in courtrooms.

Under the Djukanovic law they shall now be decided by the government land registry alone of a state he has ruled for 30 years.

Should the church contest any attempts at land seizure or fictitious claims they must do so before the same, Djukanovic-controlled body responsible for adjudicating the legal validity of their land ownership documents; Once a decision has been made, there is no right to appeal.

With this is mind, a seemingly innocuous law becomes a naked land-grab identified, adjudicated and executed by the state. And the church has already had a taste of the treatment to come. In May, in the midst of a coronavirus lockdown, the bishop of Montenegro’s second city was arrested along with seven other priests. A crowd had gathered outside their ancient monastery for a religious holiday, despite the bishop declaring no public event would be taking place. These details were irrelevant to the authorities - and so the incarcerations and beatings began.

Perhaps, compared to the Serbian Orthodox Church - which to western eyes with its Cyrillic writings, bearded priests, icons and incense may seem unlike the optics of our own - President Djukanovic and his political machine can appear modern and familiar.

No one should be fooled. Over the decades, his dull brown socialist suits may be replaced with tailored jackets, the hammer and sickle rebranded with a new party logo - but they are the same. The apparatus of the state, the president himself, and party he molded are three vines intertwined from the same root. They are one in three, indivisible: an unholy trinity.

There is no “law on religious freedom” in Montenegro: only a law to control the Church and for state-sponsored theft. In a small state, there is only so much to parcel out to keep party and partisans happy. So Djukanovic after 30 years on the take is running out of road and resources to hand out to his henchmen and turns on the Church for there is nothing left to steal.