We Can Take Back the USA by Modeling the Hero Southwest Airline Pilots!

Wayne Allyn Root
|
Posted: Oct 24, 2021 12:01 AM
Share   Tweet
The opinions expressed by columnists are their own and do not necessarily represent the views of Townhall.com. 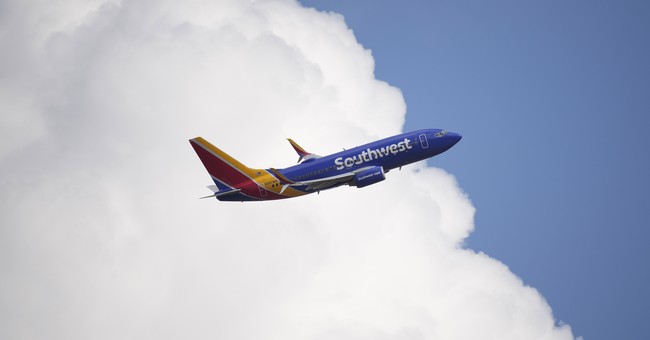 A month ago, my brand-new bestseller, "The Great Patriot Protest & Boycott Book," came out. A month seems like a lifetime ago. What happened over this past month validates the strategy I laid out. It changes everything.

My book lays out the case that America and American exceptionalism are under vicious attack. We are facing a radical communist takeover of the United States. I believe we must respond with the tactics and strategies of Martin Luther King Jr. -- with strikes, boycotts, protests, intimidation and CIVIL DISOBEDIENCE.

The great news is the pilots of Southwest Airlines have put these tactics to work. And they've proven that conservatives and patriots can use this strategy to save America.

Civil disobedience and intimidation are what liberals (i.e., socialists, communists, Marxists) have used for decades to steamroll us. A vocal and vicious minority has managed to hijack the direction of America with these tactics. Now it's time to turn the tables!

We now know two can play at this game.

Until now, conservatives have never used intimidation, strikes, boycotts or civil disobedience. The reasons why are simple. Liberal activists are vicious, violent and loud. That's because they have nothing to lose.

Have you ever seen an antifa protest? They look like they've never had a job, or a bath.

Left-wing protesters in 2020 weren't about protesting as much as rioting, looting and burning. They caused about $2 billion in property damage in the summer of 2020.

We do all the working, spending and taxpaying in America.

We have jobs, businesses, families, assets to protect. We can't afford to engage in violence or be arrested. We'd go broke just paying the legal fees. Whereas liberals with no assets are provided free legal aid lawyers by the justice system, or free lawyers by billionaire communist backers like George Soros.

But we can copy this strategy of civil disobedience by using the one advantage we've got -- buying power. We don't need violence. We can bring this nation and economy to its knees with our wallets and purses.

Other than open borders, the main tool of this communist takeover is COVID-19 vaccine mandates. This is the "defunding of the middle class." The middle class doesn't want this vaccine. Cops don't want it. Neither do firemen, prison guards, border patrol, nurses, paramedics, the military or jet pilots. Millions of middle-class Americans will soon be fired or forced to resign. They will lose their jobs, incomes and pensions.

Liberals are ripping this country apart with their COVID-19 vaccine mandates.

We have to hit back -- HARD. Just as my book proposes, the hero pilots of Southwest Airlines just used the power of the purse. A week ago, they refused to fly. They called in sick by the thousands. Thousands of planes were grounded. The airline lost $75 million in just a few days.

The liberal mainstream media once again lied -- they made believe this was based on "scheduling issues and weather." The last thing they want is word getting out that millions of Americans refuse to take the COVID-19 jab and some of them are fighting back. That message scares government and liberals to death -- as well it should.

The first volley was shot by Southwest Airlines pilots and flight crews. The result? VICTORY. Southwest's CEO announced they will not adhere to Biden's federal mandate to terminate workers who won't vaccinate. Immediately Delta and American announced the same decision.

Bull's-eye. The airlines blinked. We won. This is the way forward. This is the model for conservatives. We do all the work. We have the buying power. Without our work ethic and dollars, every company in America is bankrupt and out of business.

This is the way forward out of the darkness -- with mass protests, strikes, boycotts, intimidation and civil disobedience.

In my next column, I'll lay out a plan that empowers conservatives, Christians and patriots to showcase the full force of our power with nationwide strikes.

As Benjamin Franklin said, we either hang together, or we surely hang separately. Together, we have the power to take back our country from these communist traitors.