Wayne Allyn Root
|
Posted: Mar 22, 2018 12:01 AM
Share   Tweet
The opinions expressed by columnists are their own and do not necessarily represent the views of Townhall.com. 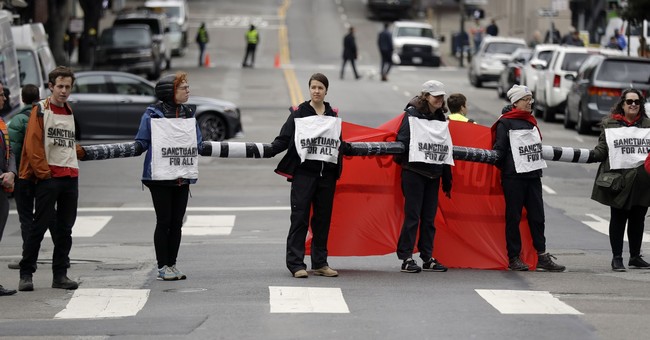 Liberals in California want to secede. They are trying to put it on the ballot. They call it “Calexit.” I say, “Glory Hallelujah."  Let’s help make it happen. I propose 63 million Trump voters join the team. Let's work 24/7 to turn their dream into a reality!

The Mayor of Oakland famously played Paul Revere to warn illegal felons “ICE is coming. ICE is coming.” The Feds report over 800 felons evaded arrest because of that stunt. How many legal, law-abiding, native-born Americans will be robbed, raped, or murdered in the coming weeks because of that act of sedition?

A California judge just sided with the ACLU and barred LA County from enforcing gang restrictions that dramatically lowered crime. California has once again sided with hoodlums and gang-bangers over the law-abiding taxpayers.

In Oakland, a coffee shop prohibits employees from serving police, in order to create a “safe space” for their customers. Californians hate and distrust police more than illegal felons and thugs who speak no English and wear gang tattoos. Really.

All of this is sheer madness. But California has taken it to a whole new level.

Just this week the California Senate appointed the first-ever illegal alien to an official statewide post. Lizbeth Mateo, a 33-year old illegal alien-turned-attorney, will serve on the official state committee that doles out money to illegals attending college. In California, illegals now decide how taxpayer money is spent.

President Trump loves to brand (see "Crooked Hillary"). Let’s brand California. It’s not a “Sanctuary State.” It’s a “Fugitive State.” It’s a place that chooses to let felons and fugitives run free. It’s a place where the rights of criminals are far more important than protecting legal, law-abiding American citizens who pay taxes. We are the second class citizens in California.

Here’s the way to fix the problem. Liberal Californians want to secede. I'm joining the movement. How about you?

Conservatives should beg California to secede. We should make it easy for them. We should help pay for it. Pass the hat. Every conservative should chip in $20. I’ll throw $1000 to get the ball rolling.

Next think of Congress. California has 53 House seats. Democrats lead 39-14, for a net gain of 25 seats. Send California packing and the GOP gains a 25 House seat lead. We would dominate the House for decades to come.

And of course, the GOP would gain an automatic two seats in the Senate through the subtraction of California. As it stands now, those two U.S. Senate seats are deep blue Democrat forever. But if California secedes a 51-49 GOP lead instantly moves to 51-47.

If 63 million Trump voters just gave an average of $20 each to the "Calexit movement" that’s over $1.2 billion dollars. That’s enough money to help California secede, with enough left over as a down payment on building a wall…