Are Key Republican Leaders in D.C. Being Blackmailed? 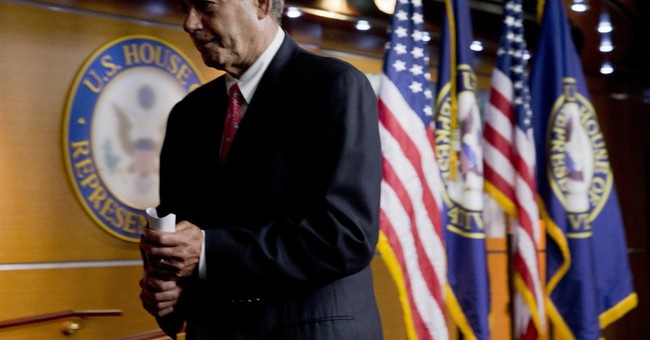 Are key Republican leaders in D.C. from the Senate, House and Supreme Court being blackmailed? Tell me you haven’t thought the exact same thing? Something is very wrong. Something smells rotten in DC. Rotten like a dead fish left at the front door of a Congressmen’s office by the Obama Crime Family. Rotten like a photo of a Supreme Court Justice with his robe down at his ankles.

Because what’s happening just isn’t normal. Please tell me how it’s possible that President Obama and his socialist cabal suffered the most massive and historic defeat in modern political history only 9 months ago- and since then they’ve gotten everything they’ve ever wanted handed to them on a silver platter. Does that make sense to you?

How’s it possible that the GOP- the party that won in a massive historic landslide gained nothing and won nothing? Not one victory. Zero. Zilch. Or in a language Democrats understand “Nada.”

Not only did Obama’s party lose badly…they lost everywhere from top to bottom. Senate. House. State Legislatures. Mayors. Governors. You name it. They lost the Governorships of deep blue Maryland and Massachusetts. They were destroyed.

Since then…conservatives have lost everything. Name something we won or achieved after that smashing victory? Name one thing. Name anything. I dare you. I double dare you.

And you don’t think someone has photos of GOP leaders in bed with little boys?

Somehow the government knew he was taking his own money out of his own bank account. I didn’t even know that was a crime warranting an interview by the FBI. But this government knew. That’s because they know everything.

Ask General David Petreus- they knew he was having an affair. Now he has a criminal record.

Ask former Virginia Governor Bob McDonnell. He’s going to prison for stuff so minor, it almost makes you laugh. It’s almost as minor as taking your own money out of your own bank account.

Notice all of these people have one thing in common- they were powerful conservatives and opponents of Obama.

Still think I’m “reaching.” Still doubt me? Really? Are you even aware that last Thursday…on the same day that Justice Roberts and the Supremes upheld Obamacare again…the Tax Inspector General of the United States (the key IRS watchdog) reported to Congress that the IRS purposely destroyed evidence of a crime.

Is it impossible to imagine that this same Obama administration that orders IRS attacks against critics of the president (like me), then orders destruction of key evidence, would stop at nothing to save Obama’s signature achievement?

Is it impossible to believe that Obama and his socialist cabal who learned from Saul Alinsky that “the ends justify the means” would hold something over a Supreme Court Justice’s head?

It’s time to ask the question loudly and boldly because something is clearly wrong in Washington DC. Is that the purpose of government agencies like the IRS, DOJ, FBI, SEC and the NSA that are abusing our rights- to listen to us…to watch us…to find something we’ve done wrong…and then use it to intimidate, harass, threaten or extort key conservative figures so that Obama can “fundamentally change America”?

It’s time to start asking the question. It’s time to be cynical. It’s time to assume the worst of this government. Was Supreme Court Justice Roberts blackmailed or intimidated? I would put nothing by this administration that lives and rules by the Chicago thug playbook.

Justice Roberts was born, raised and groomed for one job in this life- to join that Supreme Court, strike down Obamacare, protect the Constitution and end big government overreach. Yet he is the man responsible for saving Obamacare- twice. His legacy as a “conservative warrior” will be that he protected big government, supported government overreach and helped to hasten the fundamental transformation of America. This doesn’t seem odd to you? This doesn’t smell rotten?

I have felt the same way about Speaker of the House John Boehner and Senate Majority Leader Mitch McConnell for years now. Something is wrong. All it takes to destroy America and pass Obama’s agenda is to control a few key powerful conservative leaders in DC. Boehner and McConnell have never blocked anything Obama really wanted. Heck they just joined hands to hand Obama a big victory with TPA and TPP- a trade agreement so fantastic that it's been declared "classified" so no one can read it before they vote on it.

All it would take to block any attempt to stop or stall Obama's agenda is blackmail against a few key Republicans in positions of power- like Boehner, McConnell and Justice Roberts. Find out the weak link of a key political leader or government official and hold it over their heads.

What makes anyone think the government and it’s 3-letter agencies (IRS, NSA, DOJ, FBI, SEC) don’t know everything bad about everyone in key positions in DC? What makes you think that blackmail isn’t happening every day to conservative politicians- except it’s the government doing the blackmailing?

You know…the same government that asked the IRS to target key critics of this President- like me. And then ordered the IRS to destroy the evidence.

The same government that told you “If you like your health insurance, you can keep it.”

The same government that says there is no problem with $18 trillion in debt, while Greece collapses under debt one thousand times smaller than America’s debt. Or didn’t you know that Greek banks are literally out of money and Greece is on the verge of a massive collapse that threatens to take down the entire EU.

The same government that indicted both rating agencies immediately after they dared to downgrade the credit rating of the United States for the first time in history.

Just a guess, but here’s how I think it goes. I think they walk up to a key politician like John Boehner or Justice Roberts and they offer both a carrot and stick. They threaten to expose something terrible like an affair, or corruption, or malfeasance, or immorality that would shock the nation, ruin your career, destroy your legacy, cost you your marriage, destroy your relationship with your children and leave you unemployable by any respectable law firm or lobbyist. That’s what’s behind door number one.

Or if you see the light and vote our way, you get to continue playing big shot, your legacy is untouched, your family loves you, and you retire someday to a $5 million per year lobbying job (like Dennis Hastert). That’s what’s behind door number two.

Which would you choose?

Trust me- those options are being offered every day by the Obama Crime Family to key political figures in DC. Republicans are being blackmailed, intimidated, extorted and bribed.

That explains Justice Roberts and the Supremes ruling against us again. That explains why we keep winning elections, yet we keep gaining nothing and losing everything. It’s all been fixed.

The Obama Crime Family is in charge.