Liberals in a Tizzy

Walter E. Williams
|
Posted: Sep 06, 2017 12:01 AM
Share   Tweet
The opinions expressed by columnists are their own and do not necessarily represent the views of Townhall.com. 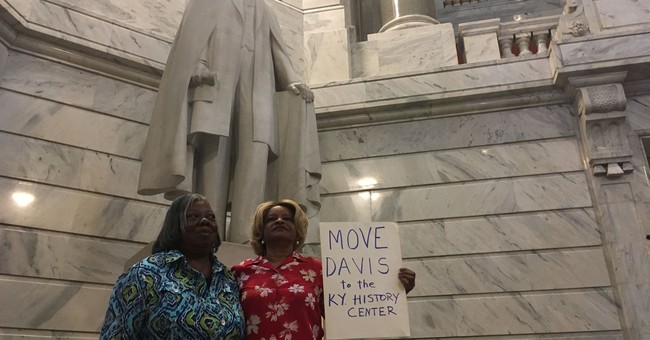 Many blacks and their white liberal allies demand the removal of statues of Confederate generals and the Confederate battle flag, and they are working up steam to destroy the images of Gens. Stonewall Jackson and Robert E. Lee and President Jefferson Davis from Stone Mountain in Georgia. Allow me to speculate as to the whys of this statue removal craze, which we might call statucide.

To understand it, we need a review of the promises black and white liberals have been making for decades. In 1940, the black poverty rate was 87 percent. By 1960, it had fallen to 47 percent. During that interval, blacks were politically impotent. There were no anti-poverty programs or affirmative action programs. Nonetheless, this poverty reduction exceeded that in any other 20-year interval. But the black leadership argued that more was necessary. They said that broad advancement could not be made unless blacks gained political power.

Fifty years ago, there were fewer than 1,000 black elected officials nationwide. According to the Joint Center for Political and Economic Studies, by 2011 there were roughly 10,500 black elected officials, not to mention a black president. But what were the fruits of greater political power? The greatest black poverty, poorest education, highest crime rates and greatest family instability are in cities such as Detroit, St. Louis, Oakland, Memphis, Birmingham, Atlanta, Baltimore, Cleveland, Philadelphia and Buffalo. The most common characteristic of these predominantly black cities is that for decades, all of them have been run by Democratic and presumably liberal politicians. Plus, in most cases, blacks have been mayors, chiefs of police, school superintendents and principals and have dominated city councils.

During the 1960s, black and white liberals called for more money to be spent on anti-poverty programs. Since the Lyndon Johnson administration's War on Poverty programs, U.S. taxpayers have forked over $22 trillion for anti-poverty programs. Adjusted for inflation, that's three times the cost of all U.S. military wars since the American Revolution. Despite that spending, the socio-economic condition for many blacks has worsened. In 1940, 86 percent of black children were born inside marriage, and the black illegitimacy rate was about 15 percent. Today, only 35 percent of black children are born inside marriage, and the illegitimacy rate hovers around 75 percent.

The visions of black civil rights leaders and their white liberal allies didn't quite pan out. Greater political power and massive anti-poverty spending produced little. The failure of political power and the failure of massive welfare spending to produce nirvana led to the expectation that if only there were a black president, everything would become better for blacks. I cannot think of a single black socio-economic statistic that improved during the two terms of the Barack Obama administration. Some have become tragically worse, such as the black homicide victimization rate. For example, on average in Chicago, one person is shot every two hours, 15 minutes, and a person is murdered every 12 1/2 hours.

So more political power hasn't worked. Massive poverty spending hasn't worked. Electing a black president hasn't worked. What should black leaders and their white liberal allies now turn their attention to in order to improve the socio-economic condition for blacks? It appears to be nearly unanimous that attention should be turned to the removal of Confederate statues. It's not only Confederate statue removal but Confederate names of schools and streets. Even the Council on American-Islamic Relations agrees. It just passed a resolution calling for the removal of all Confederate memorials, flags, street names and symbols from public spaces and property.

By the way, does the statue of Union Gen. William Tecumseh Sherman qualify for removal? He once explained his reluctance to enlist former slaves, writing, "I am honest in my belief that it is not fair to our men to count negroes as equals ... (but) is not a negro as good as a white man to stop a bullet?" It's difficult to determine where this purging of the nation's history should end.