Walter E. Williams
|
Posted: Jun 28, 2017 12:01 AM
Share   Tweet
The opinions expressed by columnists are their own and do not necessarily represent the views of Townhall.com. 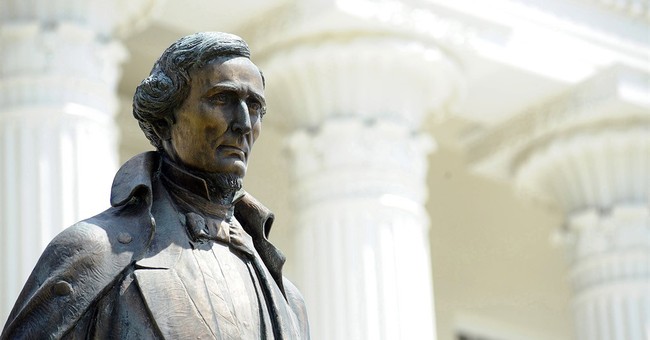 My "Rewriting American History" column of a fortnight ago, about the dismantling of Confederate monuments, generated considerable mail. Some argued there should not be statues honoring traitors such as Robert E. Lee, Stonewall Jackson and Jefferson Davis, who fought against the Union. Victors of wars get to write the history, and the history they write often does not reflect the facts. Let's look at some of the facts and ask: Did the South have a right to secede from the Union? If it did, we can't label Confederate generals as traitors.

Article 1 of the Treaty of Paris (1783), which ended the war between the Colonies and Great Britain, held "New Hampshire, Massachusetts Bay, Rhode Island and Providence Plantations, Connecticut, New York, New Jersey, Pennsylvania, Delaware, Maryland, Virginia, North Carolina, South Carolina and Georgia, to be free sovereign and Independent States." Representatives of these states came together in Philadelphia in 1787 to write a constitution and form a union.

During the ratification debates, Virginia's delegates said, "The powers granted under the Constitution being derived from the people of the United States may be resumed by them whensoever the same shall be perverted to their injury or oppression." The ratification documents of New York and Rhode Island expressed similar sentiments.

At the Constitutional Convention, a proposal was made to allow the federal government to suppress a seceding state. James Madison, the "Father of the Constitution," rejected it. The minutes from the debate paraphrased his opinion: "A union of the states containing such an ingredient (would) provide for its own destruction. The use of force against a state would look more like a declaration of war than an infliction of punishment and would probably be considered by the party attacked as a dissolution of all previous compacts by which it might be bound."

America's first secessionist movement started in New England after the Louisiana Purchase in 1803. Many were infuriated by what they saw as an unconstitutional act by President Thomas Jefferson. The movement was led by Timothy Pickering of Massachusetts, George Washington's secretary of war and secretary of state. He later became a congressman and senator. "The principles of our Revolution point to the remedy -- a separation," Pickering wrote to George Cabot in 1803, for "the people of the East cannot reconcile their habits, views, and interests with those of the South and West." His Senate colleague James Hillhouse of Connecticut agreed, saying, "The Eastern states must and will dissolve the union and form a separate government." This call for secession was shared by other prominent Americans, such as John Quincy Adams, Elbridge Gerry, Fisher Ames, Josiah Quincy III and Joseph Story. The call failed to garner support at the 1814-15 Hartford Convention.

The U.S. Constitution would have never been ratified -- and a union never created -- if the people of those 13 "free sovereign and Independent States" did not believe that they had the right to secede. Even on the eve of the War of 1861, unionist politicians saw secession as a right that states had. Rep. Jacob M. Kunkel of Maryland said, "Any attempt to preserve the union between the states of this Confederacy by force would be impractical and destructive of republican liberty." The Northern Democratic and Republican parties favored allowing the South to secede in peace.

Northern newspapers editorialized in favor of the South's right to secede. New-York Tribune (Feb. 5, 1860): "If tyranny and despotism justified the Revolution of 1776, then we do not see why it would not justify the secession of Five Millions of Southrons from the Federal Union in 1861." The Detroit Free Press (Feb. 19, 1861): "An attempt to subjugate the seceded States, even if successful, could produce nothing but evil -- evil unmitigated in character and appalling in extent." The New-York Times (March 21, 1861): "There is a growing sentiment throughout the North in favor of letting the Gulf States go."