Walter E. Williams
|
Posted: Jun 08, 2016 12:01 AM
Share   Tweet
The opinions expressed by columnists are their own and do not necessarily represent the views of Townhall.com. 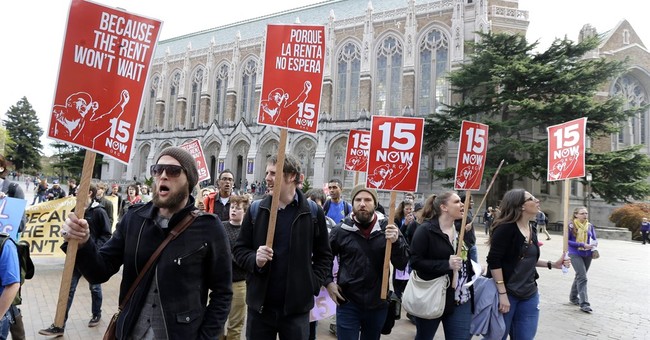 A basic economic premise holds that when the price of something rises, people seek to economize on its use. They seek substitutes for that which has risen in price. Recent years have seen proposals for an increase in the federal minimum wage to $15 an hour. Some states and localities, such as Seattle, have already legislated a minimum wage of $15 an hour.

Nobody should be surprised that fast-food companies such as Wendy's, Panera Bread, McDonald's and others are seeking substitutes for employees who are becoming costlier. One substitute that has emerged for cashiers is automated kiosks where, instead of having a person take your order, you select your meal and pay for it using a machine. Robots are also seen as an alternative to a $15-an-hour minimum wage. In fact, employee costs are much higher than an hourly wage suggests. For every employee paid $15 an hour, a company spends an additional $10 an hour on non-wage benefits, such as medical insurance, Social Security, workers' compensation and other taxes. That means the minimum hourly cost of hiring such an employee is close to $25.

The vision that higher mandated wages (that exceed productivity) produce no employment effects is what economists call a zero-elasticity view of the world -- one in which there is no response to price changes. It assumes that customers are insensitive to higher product prices and investors are insensitive to a company's profits. There is little evidence that people are insensitive to price changes, whether they be changes in taxes, gas prices, food prices, labor prices or any other price. The issue is not whether people change their behavior when relative prices rise or fall; it is always how soon and how great the change will be. Thus, with minimum wage increases, it is not an issue of whether firms will economize on labor but an issue of how much they will economize and who will bear the burden of that economizing.

Fast-food restaurants must respond to higher prices because they have two sets of ruthless people to deal with. We can see that with a hypothetical example. Imagine that faced with higher employee costs, Burger King automates and, as a result of finding cheaper ways to do things, it can sell its hamburgers for $3. Its competitor McDonald's does not automate and keeps the same number of employees in the face of higher wages, maybe to be nice and caring. McDonald's might try to forestall declining profits by attempting to recover higher labor costs by raising product prices -- say, charging $5 for a hamburger. However, consumers are not insensitive to higher prices. They would seek cheaper substitutes, thereby patronizing Burger King. The bottom line is that in the wake of higher minimum wages, surviving companies will be those that find ways to economize on labor usage.

There is another ruthless set of people. They are investors. If customers were to flock to Burger King, McDonald's profits would fall. What is your guess as to what investors would do? My guess is they would sell shares in McDonald's. An even more dismal picture for McDonald's would be the specter of corporate takeover attempts. Somebody would see that money could be made by bringing McDonald's to its senses.

The saddest aspect of the minimum wage story is the damage it does to human beings. The current hourly wage for a fast-food restaurant cashier is $7.25 to $9 per hour. That produces a yearly salary of $15,000 to $20,000, plus fringes. That's no great shakes, but it is honest work and a start in life. It might be the very best some people could do. Enter the arrogance and callousness of the elite. Their vision of what a person should earn, expressed by higher minimum wages, destroys people's best alternative without offering a superior one in its place. Maybe the elite believe that welfare, unemployment compensation and possibly engaging in illegal activities are a superior alternative to earning an honest and respectable living on a cashier's salary. That is a despicable vision.