Walter E. Williams
|
Posted: Jun 01, 2016 12:01 AM
Share   Tweet
The opinions expressed by columnists are their own and do not necessarily represent the views of Townhall.com. 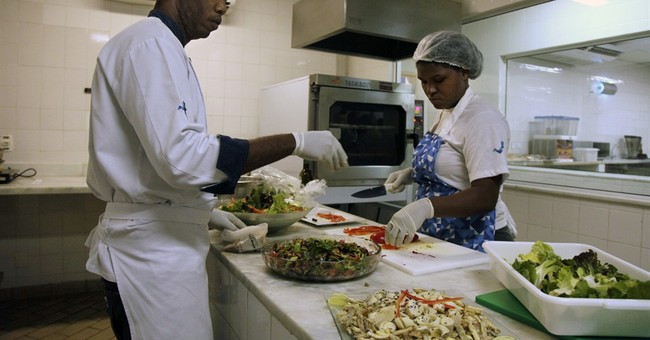 White teenage unemployment is about 14 percent. That for black teenagers is about 30 percent. The labor force participation rate for white teens is 37 percent, and that for black teens is 25 percent. Many years ago, in 1948, the figures were exactly the opposite. The unemployment rate of black 16-year-old and 17-year-old males was 9.4 percent, while that of whites was 10.2 percent. Up until the late 1950s, black teens, as well as black adults, were more active in the labor market than their white counterparts. I will return to these facts after I point out some elitist arrogance and moral bankruptcy.

Supporters of a $15 minimum wage are now admitting that there will be job losses. "Why shouldn't we in fact accept job loss?" asks New School economics and urban policy professor David Howell, adding, "What's so bad about getting rid of crappy jobs, forcing employers to upgrade, and having a serious program to compensate anyone who is in the slightest way harmed by that?" Economic Policy Institute economist David Cooper says: "It could be that they spend more time unemployed, but their income is higher overall. If you were to tell me I could work fewer hours and make as much or more than I could have previously, that would be OK."

What's a "crappy job"? My guess is that many of my friends and I held the jobs Howell is talking about as teenagers during the late 1940s and '50s. During summers, we arose early to board farm trucks to New Jersey to pick blueberries. I washed dishes and mopped floors at Philadelphia's Horn & Hardart restaurant, helped unload trucks at Campbell Soup, shoveled snow, swept out stores, delivered packages and did similar low-skill, low-wage jobs. If today's arrogant elite were around to destroy these jobs through wage legislation and regulation, I doubt whether I and many other black youths would have learned the habits of work that laid the foundation for future success. Today's elite have little taste for my stepfather's admonition: Any kind of a job is better than begging and stealing.

What's so tragic about all of this is that black leadership buys into it. What the liberals have in mind when they say there should be "a serious program to compensate anyone who is in the slightest way harmed" is that people who are thrown out of work should be given welfare or some other handout to make them whole. This experimentation with minimum wages on the livelihoods of low-skilled workers is ethically atrocious.

In the first paragraph, I pointed out that black youths had lower unemployment during earlier times. How might that be explained? It would be sheer lunacy to attempt to explain the more favorable employment statistics by suggesting that during earlier periods, blacks faced less racial discrimination. Similarly, it would be lunacy to suggest that black youths had higher skills than white youths. What best explain the loss of teenage employment opportunities, particularly those of black teenagers, are increases in minimum wage laws. There's little dispute within the economics profession that higher minimum wages discriminate against the employment of the least skilled workers, and that demographic is disproportionately represented by black teenagers.

President Barack Obama, the Congressional Black Caucus, black state and local politicians, and civil rights organizations are neither naive nor stupid. They have been made aware of the unemployment effects of the labor laws they support; however, they are part of a political coalition. In order to get labor unions, environmental groups, business groups and other vested interests to support their handout agenda and make campaign contributions, they must give political support to what these groups want. They must support minimum wage increases even though it condemns generations of black youths to high unemployment rates.

I can't imagine what black politicians and civil rights groups are getting in return for condemning black youths to a high rate of unemployment and its devastating effects on upward economic mobility that makes doing so worthwhile, but then again, I'm not a politician.