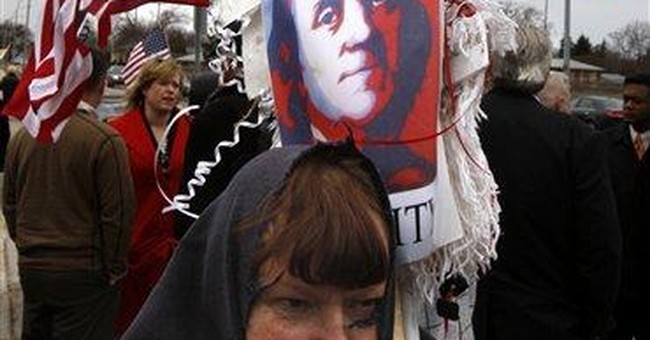 If there is anything good to say about Democrat control of the White House, Senate and House of Representatives, it's that their extraordinarily brazen, heavy-handed acts have aroused a level of constitutional interest among the American people that has been dormant for far too long. Part of this heightened interest is seen in the strength of the tea party movement around the nation. Another is the angry reception that many congressmen received at their district town hall meetings. Yet another is seen by the exchanges on the nation's most popular radio talk shows such as Rush Limbaugh, Sean Hannity, Mark Levin and others. Then there's the rising popularity of conservative/libertarian television shows such as Glenn Beck, John Stossel and Fox News.

While the odds on favorite is that the Republicans will do well in the fall elections, Americans who want constitutional government should not see Republican control as a solution to what our founders would have called "a long train of abuses and usurpations." Solutions to our nation's problems require correct diagnostics and answers to questions like: Why did 2008 presidential and congressional candidates spend over $5 billion campaigning for office? Why did special interests pay Washington lobbyists over $3 billion that same year? What are reasons why corporations, unions and other interest groups fork over these billions of dollars to lobbyists and into the campaign coffers of politicians?

One might say that these groups are simply extraordinarily civic-minded Americans who have a deep and abiding interest in elected officials living up to their oath of office to uphold and defend the U.S. Constitution. Another response is these politicians, and the people who spend billions of dollars on them, just love participating in the political process. If you believe either of these explanations, you're probably a candidate for some medicine, a straitjacket and a padded cell.

A far better explanation for the billions going to the campaign coffers of Washington politicians and lobbyist lies in the awesome government power and control over business, property, employment and other areas of our lives. Having such power, Washington politicians are in the position to grant favors and commit acts that if committed by a private person would land him in jail.

The greater Congress' ability to grant favors and take one American's earnings to give to another American, the greater the value of influencing congressional decision-making. There's no better influence than money. The generic favor sought is to get Congress, under one ruse or another, to grant a privilege or right to one group of Americans that will be denied another group of Americans.

House Speaker Nancy Pelosi covering up for a corrupt Ways and Means Committee Chairman, Charles Rangel, said that while his behavior "was a violation of the rules of the House. It was not something that jeopardized our country in any way." Pelosi is right in minimizing Rangel's corruption. It pales in comparison, in terms of harm to our nation, to the legalized corruption that's a part of Washington's daily dealing.

Hopefully, our nation's constitutional reawaking will begin to deliver us from the precipice. There is no constitutional authority for two-thirds to three-quarters of what Congress does. Our constitution's father, James Madison, explained, "The powers delegated by the proposed Constitution to the federal government, are few and defined ... (to be) exercised principally on external objects, as war, peace, negotiation, and foreign commerce."