Vik Khanna
|
Posted: Oct 25, 2020 12:01 AM
Share   Tweet
The opinions expressed by columnists are their own and do not necessarily represent the views of Townhall.com. 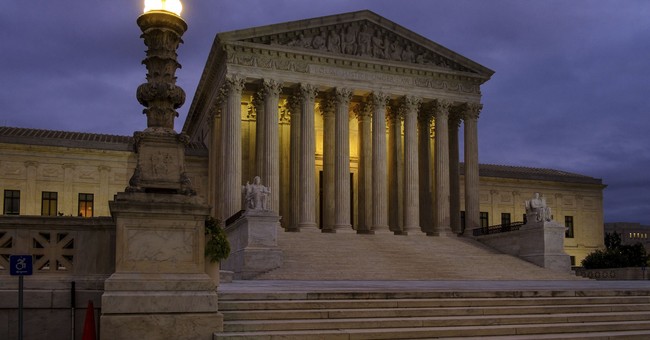 Editor's Note: This is Part Two in a two-part series.

In the first part of this essay, I explored how a conservative justice can help to restore judicial modesty and restraint on abortion and the ACA. Below, I outline four unconventional health policy issues that will also benefit from the influence of Justice Amy Coney Barrett and, hopefully, more conservative thinkers to follow.

Expand the Second Amendment. Don’t think gun rights are a health issue? Ask one of the hundreds of thousands of gun owners who use their weapons every year to defend themselves or another person. Or, how about asking the five million new gun owners about whether they feel better with a legally purchased firearm within reach while rioters tear through and occupy cities from coast to coast. Defunding police departments will push law-abiding citizens to take it upon themselves to protect their own lives, liberty, and pursuit of happiness because self-preservation is the ultimate health goal, and self-respect and self-reliance the most useful tools to achieve it. It is critical for the Court to rule explicitly that Second Amendment rights do not end at your doorway and that reasonable restrictions on gun ownership (of which there are already many) must meet a strict scrutiny test in every single instance.

Rule the lockdowns unconstitutional. In mid-September, Judge William Stickman IV in the Western District of Pennsylvania courageously ruled that state’s lockdowns unconstitutional. The lockdowns are devastating far more people than the virus, as we have nearly wiped out entire industries, eliminating many jobs forever. This penny-wise, pound-foolish strategy and the economic disruption and dislocation that it causes will come back to haunt us with rising rates of depression, suicide, substance abuse, domestic violence, and crime.

We may have saved the hospitals and nursing homes, whose incompetence is largely given a pass, but we have eviscerated the taxpayers that subsidize these institutions. Courageous scientists from around the world now are demonstrating that principle matters, and they are breaking away from the narrative that lockdowns work. Even the intellectually barren World Health Organization now concedes that lockdowns are a no-win strategy. Lockdowns kill, particularly women, people of color, and those with blue-collar, get-your-hands-dirty skills who cannot Zoom in to clean a hotel room or cook meals.

Overturn Kelo. Two of the most important pillars of a free society are the right to be left alone and to own property, and frequently we seek the former by doing the latter. Think of the impact on your health were the government to seize your property to satisfy a private desire that may have incidentally have a public purpose, contrary to the Fifth Amendment’s crystal-clear language of “public use.” To paraphrase Justice Thomas’s dissent in Kelo, how is it possible for people to be safe from government excess when they are on their property, but the property itself is there for the taking? Thinking back to the words of Founding Father John Dickinson, long-term health is inextricably intertwined with safety and security in property and person. If you cannot be sure that your own government will leave you alone (unless you committed a crime) then your life is lived constantly looking over your shoulder, endlessly stressed about who will knock on your door next and what they will take.

A progressive, Democratic administration will push to spread low-income housing projects (many of which are privately owned) to close-in suburbs where many urban dwellers have just landed after wearying of the crime-soaked inner-city-disaster Blue zones of places such as Baltimore, St. Louis, Memphis, District of Columbia, Chicago, Seattle, Portland, and Philadelphia. Overturning Kelo is essential to stopping this march and ensuring that American property owners -- particularly those in working class and middle-class neighborhoods just on city edges -- can sleep soundly and safely at night.

Support the President’s withdrawal from the World Health Organization (WHO). The medical academy is already locked and loaded for U.S. withdrawal from the WHO. When the president’s proposed withdrawal date arrives, it is inevitable that a lawsuit will appear. The U.S. joined the WHO at its founding in 1948 by way of a joint resolution. Current U.S. funding for WHO membership ends next July, and the president is right to want to exit. When WHO began, its primary role was to serve as a conduit for what we now call technology transfer, chiefly, sending resources, ideas, products, and services from industrialized nations to the Third World. This quaint socialist anachronism has far outlived its usefulness.

The reality is that the WHO is a marginally competent, scandal-plagued branch of the United Nations (is there any other kind?) that has almost nothing to offer Americans. Technology transfer and data sharing from American companies, non-governmental organizations, and government agencies are more properly now considered functions of foreign policy and, as the CCP virus debacle has taught us, national security concerns, not simply health matters.

The Court and its new justice should defer to Mr. Trump on WHO membership, because the conduct of foreign policy and protection of national security are executive branch functions. Of course, if Republicans rule the roost on both ends of Pennsylvania Avenue, then the time will be ripe to repeal the joint resolution and be done with the WHO altogether. There are many alternative ways for American NGOs and universities to share information with their Third World colleagues, but only after the technology transfer is vetted by national security experts, and it is first put to use to help underserved Americans who may benefit from it.

To give you some idea of how disconnected from American values the WHO and its acolytes are, my alma mater, The Johns Hopkins School of Public Health, recently distributed its periodic magazine. The cover story was “Can Public Health Save The World.” In the entire 56-page issue, there is not a single discussion about how to reconcile the conflicts between individual freedoms in our Constitutional republic and public health strategies, many of which are collectivist, opaque, coercive, and destructive of individual rights.

Hopkins is the very epitome of today’s morally crumbling and incoherently emotive Ivory Tower, a place that is extravagantly subsidized by taxpayers who should know they will never get a return on investment. Just consider the irony that the palatial Johns Hopkins Medical Campus is in East Baltimore, one of the worst ghettos in the country. It is a place where the overwhelming majority of black children grow up in a home without a father, and murder is the chief domestic product. The policy ostriches at Hopkins love to crow about the Saturday Night Special law they helped get through the Maryland General Assembly in 1990. Since then, however, Baltimore has proven to consistently be one of the most deadly places in the entire country, with violent crime rates that are four to five times more than the national numbers. The Hopkins wunderkinds can’t fix their own neighborhood but have the gall to lecture everyone else on how they and the WHO will save the world.

The most important step needed to improve the public health of Americans is not a judicial stamp of approval on every new government grasp of the throats of individuals. We need a Supreme Court that has the courage to build a fence of Constitutional values and precepts between a rapacious public health establishment and people who mostly want to be left alone to build lives that bring them domestic tranquility and the blessings of liberty. Those things, I believe, are actually in the Constitution.

Mr. Khanna is a retired health policy consultant and a 1984 graduate of the Johns Hopkins School of Hygiene and Public Health.