Vijay Jayaraj
|
Posted: Jul 04, 2018 12:01 AM
Share   Tweet
The opinions expressed by columnists are their own and do not necessarily represent the views of Townhall.com. 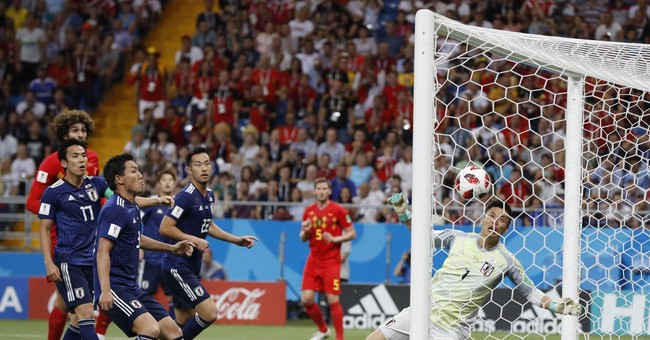 This week the teams at the FIFA football (what you Americans call soccer) World Cup competition in Russia are in their knockout phase. As has happened repeatedly in the past decade, the teams that have survived surprise many fans.

While most people enjoy the suspense of the games, some don’t. Environmental activists and climate alarmists criticize international sporting events. During the 2016 Rio Olympics, they made sure climate change took center stage.

In response, FIFA announced special actions to offset carbon emissions. Some are mere window dressing with no significant impact on emissions. None will have any measurable effect on climate.

But how credible are the allegations in the first place? Not very.

Carbon dioxide is an odorless, colorless, gas. It is non-toxic except at levels 20 or more times the present. Until recently, it was recognized as essential to life. How did it go from hero to villain?

Some scientists, depending on computer climate models, theorized that increasing CO2 concentration in the atmosphere would raise global temperature to catastrophic levels. They managed to persuade policymakers worldwide.

Yet in the real world, as opposed to the make-believe world of computer models, carbon dioxide emissions from human activity failed to cause any significant rise in temperatures during the last 60 years.

It’s not that there’s been no warming. There has been. It’s that all the warming can be explained by variations in three natural causes: volcanic eruptions, energy from the sun, and ocean currents, especially the El Niño/La Niña Southern Oscillation and the Pacific Decadal Oscillation.

Account for those, and there’s no warming left to blame on CO2.

Scientists became nervous when models predicted warming during the first decade of this century that was drastically greater than what actually occurred. The alarmists kept hoping temperature would catch up with predictions in the second decade, but it didn’t.

As shown in satellite-derived data, there was a temporary upward blip driven by the unusually strong 2015–2016 El Niño, but since then it’s cooled. The overall warming trend for the last 3-1/2 decades has been 0.13 degree C per decade. The computer models predicted two-thirds more.

What went wrong? The models were tuned to be highly sensitive to carbon dioxide emissions. In reality, temperature depends very little on CO2.

The result has been a major mismatch between temperature increase and carbon dioxide emissions.

While emissions were higher than ever, global average temperature failed to increase significantly. Indeed, it rose faster in preceding decades, during lower emissions. And contrary to the popular scare in the media, temperatures have gone the opposite way this year.

Much like top teams entering this year’s World Cup, climate science has suffered shocking knockouts. Starting with the Climategate scandal at the University of East Anglia in 2009, which I witnessed as a student, climate alarmists’ erroneous claims have been exposed repeatedly.

The predictions of top climate scientists, based on computer climate models, had a stunning collapse in the past two years, as more contrary evidence accumulated.

But unlike the World Cup, where defeated teams drop out of competition, climate alarmists continue to hold key positions in academic and policymaking institutions. They impede the progress of climate science and promote harmful policies based on exaggerated, unrealistic, and hard-to-believe climate theories.

It’s time for governments worldwide to strip climate alarmists of their power. How? By refusing to listen to them so long as global temperature data keep contradicting their predictions.

The World Cup is a great celebration of a great sport. Its millions of fans and patriots can be sure that it in no way harms the Earth’s climate. May the best team win!