Vijay Jayaraj
|
Posted: Jan 13, 2018 12:01 AM
Share   Tweet
The opinions expressed by columnists are their own and do not necessarily represent the views of Townhall.com. 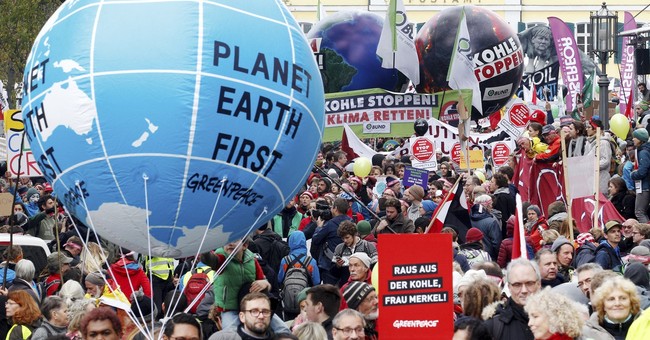 As record lows gripped many parts of the U.S. and Canada, the global warming elitists scrambled to announce to the world that climate change was the driving force behind the freezing weather.

Inevitably, their claims have exposed the hypocrisy of the global warming cult that has instilled fear among the public.

Temperatures in many parts of the Atlantic U.S. went down drastically last week. Canada was not an exception, with record lows registered in many provinces since November last year.

While some forecasts in December predicted a colder than usual winter due to the polar vortex inversion, the drop in mercury was more severe than expected.

Extreme cold and extremely hot weather patterns can occur at any point in history, regardless of whether the earth is on a long-term warming trend or not.

For example, the Earth went through a mini ice age during the 16th century. Soon after the end of the mini ice age in the 17th century global temperatures began rising, and have been on a warming trend since then.

Despite this overall warming trend, countries like the U.S. experienced several severe winters during the 19th and 20th century. This can be attributed to many reasons such as the inversion of the Polar Vortex, a decrease in solar activity, and other natural cyclic phenomenon.

These extremely cold temperatures do not provide sufficient reasons to conclude whether the global warming hypothesis is right or wrong. However, they expose the flawed predictions of the global warming alarmists, thus falsifying their climate-doom propaganda.

The global warming alarmists face two major problems here. One—their claim of carbon dioxide emission from human activity is the primary driver of temperature increase in the 20th century, and two—their claim that global warming is responsible for the ongoing extreme winter in the U.S. and Canada.

This truth even prompted several of the staunchest climate alarmists to acknowledge the blatant errors in the temperature forecasts of the computer climate models used by the United Nations to inform global energy and developmental policies.

In fact, hundreds of scientific papers in the past two years have repudiated the claims of climate alarmists. Besides categorically denying the catastrophic increase in temperatures, they also dismiss any notion of carbon dioxide being the primary driver of global temperatures.

The hypocrisy of the climate alarmists reached a new low last week when Al Gore—one of the chief proponents of climate alarmism, suggested that the current extreme winter that we are experiencing is because of climate change.

Al Gore, quoting the opinion of another alarmist—Michael Mann, said the record lows were extreme weather events caused by climate change. If taken at face value, this signals a monumental yet unintelligible shift in the narrative of the climate alarmists.

Almost all of the climate change-related mitigation policies are based on the assumption that temperatures are increasing globally. The recent claim by Al Gore renders all of these policies meaningless.

Going by the alarmist logic, if reductions in carbon dioxide emissions are to be justified based on the claims that they could control the increase of global temperatures, then the very same emission reductions could be attributed to the current severe winters in the U.S. and Canada.

The alarmist logic thus falls flat on its face.

By blaming climate change for the record lows, the alarmists have dug their own grave. They now face an unavoidable conundrum of choosing between warming and cooling, and either way, they will depart far from the actual science of climate change.