Truman May Have Been the Proto-Trump

Victor Davis Hanson
|
Posted: May 10, 2018 12:00 AM
Share   Tweet
The opinions expressed by columnists are their own and do not necessarily represent the views of Townhall.com. 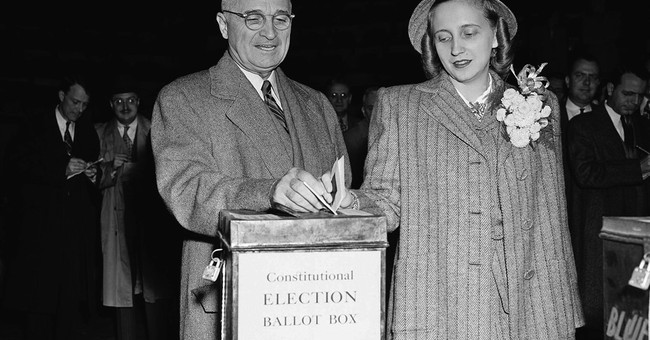 When President Harry S. Truman left office in January 1953, most Americans were glad to see him go. Since the introduction of presidential approval ratings, Truman's 32 percent rating was the lowest for any departing president except for that of Richard Nixon, who 21 years later resigned amid the Watergate scandal.

Americans were tired of five consecutive Democratic presidential terms. The Depression and World War II were both over, and people wanted a different sort of leadership that could jump-start the economy.

The outsider Truman had been an accidental president to begin with. When an ailing President Franklin D. Roosevelt ran for an unprecedented fourth term in 1944, worried Democrat insiders panicked. They feared that far-left-wing Vice President Henry Wallace might end up president if Roosevelt died in office.

Party pros replaced Wallace with the obscure Truman, a Missouri senator. They assumed that if worse came to worse, the non-entity Truman would be a token caretaker president.

Earlier, Truman had been immersed in scandal, owing to his ties to corrupt Kansas City political boss Tom Pendergast.

When Truman took office after Roosevelt's death in April 1945, he knew relatively nothing about the grand strategy of World War II. No one had told him anything about the ongoing atomic bomb project.

But for the next seven-plus years, Truman shocked the country.

Over the objections of many in his Cabinet, he ordered the dropping of two atomic bombs on Japan.

Over the objections of most of the State Department, he recognized the new state of Israel.

Over the objections of the Roosevelt holdovers, he broke with wartime ally the Soviet Union and crafted the foundations of Cold War communist containment.

Over the objections of many in the Pentagon, he integrated the armed forces.

Over the objections of some of his advisers, he sent troops to the Korean peninsula to save South Korea from North Korean invasion.

Over the objections of civil libertarians, he created the CIA.

Over the objections of most Americans, he relieved controversial five-star general and American hero Douglas MacArthur of his duties.

Naturally, there were widespread calls in the press for Truman to resign and spare the country any more humiliation.

Truman swore. He had nightly drinks and played poker with cronies. And he shocked aides and the public with his vulgarity and crass attacks on political enemies. Truman mocked the widely respected Sen. William Fulbright as "Half-bright."

In the pre-Twitter age, Truman could not keep his mouth shut. When a reviewer for the Washington Post trashed Truman's daughter's concert performance, Truman physically threatened him.

"It seems to me that you are a frustrated old man who wishes he could have been successful," Truman wrote in a letter to critic Paul Hume. "Someday I hope to meet you. When that happens, you'll need a new nose, a lot of beefsteak for black eyes, and perhaps a supporter below!"

Truman like to trash national icons -- including the military that had just won World War II. He reportedly said of MacArthur's firing: "I didn't fire him because he was a dumb son of a bitch although he was, but that's not against the law for generals. If it was, half to three-quarters of them would be in jail."

Truman was supposed to be slaughtered in the 1948 election. Roosevelt's holdover New Dealers made fun of his Midwestern parochialism. Democrats had blown up the party during the 1948 nominating convention. Left-wingers, who could not stomach Truman, broke off and supported the progressive Henry Wallace as a third-party candidate. Democratic segregationists, who hated Truman's military integration order, ran Sen. Strom Thurman as a fourth-party Dixiecrat alternative. Thurman promised to keep the South racially segregated.

In the general election, polls predicted an easy win for Republican challenger Thomas Dewey. Instead, Truman won by a comfortable margin.

With Truman's second term due to expire, Democrats forgot his "the buck stops here" pragmatism. Instead, they returned to elite progressivism and nominated Adlai Stevenson, a liberal's liberal.

Stevenson lost both the 1952 and 1956 elections to Gen. Dwight Eisenhower, a national icon. For all his criticism of Truman, Ike governed more or less as Truman did.

It took a half-century for historians to concede that the feisty Truman had solid accomplishments, especially in foreign affairs. Even his vulgarity was eventually appreciated as integral to the image of "Give 'Em Hell" Harry. But if he'd had access to Twitter, or had a Robert Mueller to hound him, the loose-cannon Truman likely would have self-destructed in a flurry of ad hominem tweets.

An obsessed special prosecutor would have followed Truman's checkered pre-presidential career all the way back to Kansas City to uncover likely unethical behavior.

Yet in the end, Truman proved successful because of what he did -- and in spite of what he said.