Victor Davis Hanson
|
Posted: Jan 25, 2018 12:01 AM
Share   Tweet
The opinions expressed by columnists are their own and do not necessarily represent the views of Townhall.com. 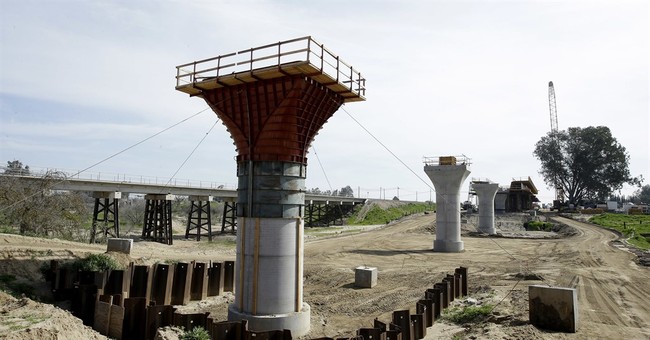 Nobody quite knows who built Stonehenge some 5,000 years ago in southern England. The mysterious ring of huge stone monoliths stands mute.

Californians may leave behind similarly enigmatic monuments for puzzled future generations. Along a 119-mile pathway in central California from Bakersfield to Madera, there are now huge, quarter-finished cement overpasses. These are the totems of the initial segment of a planned high-speed-rail corridor.

Californians thought high-speed rail was a great idea when they voted for it in 2008. The state is overwhelmingly progressive. Silicon Valley reflects California's confidence in new-age technology. Californians are among the highest-taxed citizens in the nation. They apparently are not opposed to borrowing and spending for ambitious government projects -- especially to alleviate crowded freeways.

Planners assured voters that the cost for the first 520 miles was going to be an "affordable" $33 billion. The rail line seemed a good way to connect the state's economically depressed interior with the affluent coastal corridor.

The segment from Madera to Bakersfield was thought to be the easiest to build. Rural land was cheaper to acquire in the interior of California. The route was flat, without the need to bore tunnels. The valley is considered seismically stable. Economically depressed counties welcomed the state and federal investment dollars.

But projected coasts have soared even before one foot of track has been laid. The entire project's estimated costs, according to various projections, may have nearly doubled. The current cost for the easiest first segment alone has spiraled from a promised $7.8 billion in 2016 to an estimated $10.6. There is no assurance that enough Central Valley riders will wish to use the line.

The real problem is that this environmentally friendly mass transportation project is being undertaken in a state known for high taxes, litigiousness, chronic budget crises, byzantine regulations, a dysfunctional one-party political system and challenging geography.

Will the federal government bail out California high-speed rail? So far, the Trump administration has shown no real affinity for blue-state California in general, or for the idea of subsidizing mass transit in particular.

Can California find its own money? Maybe not. The state has been on a spending spree driven by social welfare and health-care and pension costs. The state budget has ballooned 44 percent over the last seven years to an inconceivable $190 billion when all annual costs (including bond spending and special funds) are added up.

More worrisome, new federal tax codes allow only $10,000 in state and local tax deductions. Given California's exorbitant taxes and property assessments, high-end earners will soon learn that what they owe the IRS has skyrocketed.

How will the state raise taxes even higher when only about 150,000 households out of 40 million state residents already pay almost half the state's income tax? Given the proximity of several low- and no-tax states, thousands of affluent retirees might move once they see the effects of losing federal tax deductions.

California imposed new taxes on gasoline and licenses to raise $5.2 billion in order to fix decrepit roads -- which in some sense were shorted by the decision to spend billions on high-speed rail. Some surveys rate the state's once cutting-edge freeways among the worst in the country. There is not much of a fallback tax base. California has the nation's highest percentage of impoverished residents when factoring in cost of living. One in three welfare recipients in the U.S. lives in the state. One in four California residents was not born in the United States.

Outgoing California Gov. Jerry Brown just warned that in the foreseeable future it may be impossible to honor pension obligations to the state's retirees. They may be already underfunded by nearly half a trillion dollars. California's once-impressive annualized GDP is slowing. Despite the tech boom and the national economic renaissance, the state has recently slipped from fifth in the U.S. to 35th in annual economic growth.

How has California's state government reacted to the challenges to the high-speed-rail project?

The state is still talking about a new $400 billion single-payer health plan. It just became a sanctuary state, vowing to resist enforcement of federal immigration law and to use state funds to sue on behalf of undocumented immigrants. In crazy (and likely illegal) fashion, the panicked legislature is dreaming of schemes to redefine state taxes as "charitable contributions" to dodge new IRS rules.

Central Valley drivers on the state's main north-south artery, State Route 99 -- often referred to as the "highway of death" -- are frequently bottlenecked in ancient two-lane "freeways" that ironically run right next to unfinished high-speed-rail overpasses.

The answer to all these premodern problems of financial insolvency, illegal immigration and mass transportation is not postmodern dreaming. If the state does not wake up fast, future generations of Californians will wonder who built the mysterious Stonehenge-like monoliths -- and why?