Victor Davis Hanson
|
Posted: Jan 28, 2016 12:01 AM
Share   Tweet
The opinions expressed by columnists are their own and do not necessarily represent the views of Townhall.com. 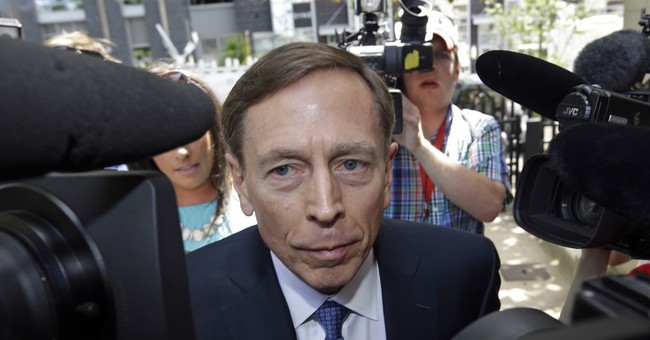 In politically driven moods, the ancient Romans often wiped from history all mention of a prior hero or celebrity. They called such erasures damnatio memoriae.

The Soviet Union likewise airbrushed away, or "Trotskyized," all the images of any past kingpin who became politically incorrect.

Secretary of Defense Ashton Carter is now thinking of retroactively taking away one or two of Petraeus' four stars. The potential demotion in rank, opposed by the Army, is intended as further punishment for the misdemeanor to which he pleaded guilty last year. Petraeus accepted two years of probation and paid a $100,000 fine for allowing his mistress, Paula Broadwell, to read classified information for research on the biography she was writing about Petraeus.

Carter apparently wants to ensure that Petraeus is treated the same fashion as other miscreant generals and admirals who have lost rank. Yet there is no evidence that Broadwell (who enjoyed a military security clearance of her own) ever shared the classified information with anyone or disclosed it in the biography.

That does not excuse the bad judgment of Petraeus. But it does invite an obvious comparison with former Secretary of State Hillary Clinton. She not only sent classified information over her unsecured email to several individuals, but remains untruthful about that fact.

To this day, we still do not know how many people received classified information via Clinton's emails, or whether hackers tapped into her non-approved private server. By any sense of commensurability, the Obama Justice Department should charge Clinton in the fashion it did Petraeus. If she goes free, the Obama administration confirms the suspicion that there are no longer any security laws for government officials -- particularly when they are powerful and their politics agree with the president's.

Petraeus was not just any four-star general. He was the most effective and talented American general since Gen. Matthew Ridgway, who saved what appeared to be a lost Korean War. Petraeus and his team promoted the so-called "surge" of troops into Iraq, and enlisted tens of thousands of Iraqis to join the American effort to defeat radical terrorists and insurrectionists.

Petraeus' efforts saved Iraq -- and thousands of American and Iraqi lives. Barack Obama entered office in 2009 with a mostly quiet Iraq. Petraeus' legacy explains why Vice President Joe Biden claimed Iraq as possibly one of the administration's "greatest achievements." Obama himself boasted in late 2011 that he was pulling out all U.S. forces from a "sovereign, stable and self-reliant" Iraq.

That claim was true -- until Obama's politically driven skedaddle from Iraq created a vacuum to be filled by Islamic State terrorists.

Practically, it might not be wise for Obama to humiliate Petraeus, thereby revisiting the circumstances of the general's strange exit from the Obama administration.

The media have rarely noted that the administration learned of Petraeus' imbroglio sometime in summer of 2012, right in the middle of the Obama re-election campaign. Yet Petraeus' sudden, unexpected resignation as CIA director came just three days after Obama's re-election. What exactly the CIA was doing in Libya, and what happened in Benghazi, are likewise murky.

The current puritanical frenzy with regard to our military is sacrificing battlefield talent. We never would have won World War II had we shared the administration's present obsessions.

The hard-drinking and womanizing Adm. Ernest King was the architect of the brilliant comeback of the U.S. Navy, which had been crippled at Pearl Harbor. Less than four years later under King, it utterly destroyed the Imperial Japanese Navy.

Gen. George S. Patton in 1943 slapped two soldiers in Sicily whom he thought were slackers, but who were probably ill. Yet the reprimanded Patton's career was ultimately salvaged. He went on to save tens of thousands of American lives in Europe with his audacious armored drives and often brilliant encirclements.

Gen. Dwight D. Eisenhower quite possibly had an affair with his chauffeur, Kay Summersby, in the midst of overseeing the Normandy operations. Should we now strip the long-dead Eisenhower of his fifth star, given that he may well have discussed confidential information with Summersby while overseeing an army of 2 million?

Iconic Gen. Douglas MacArthur carried on an affair with an underaged Filipina actress, Isabel Rosario Cooper, while he was top U.S. commander in the Philippines in 1930. Should MacArthur have been relieved of duty before he led a Pacific offensive that liberated the Philippines from Japanese occupation?

Petraeus has lost his reputation. He resigned his job as CIA director. He pled guilty to a misdemeanor. He was fined. He was put on probation.

Enough is enough with Petraeus. It is time to move on for an administration that threw away a stable Iraq -- once saved by the man it still hounds.