Did O'Reilly Finally Go Too Far? 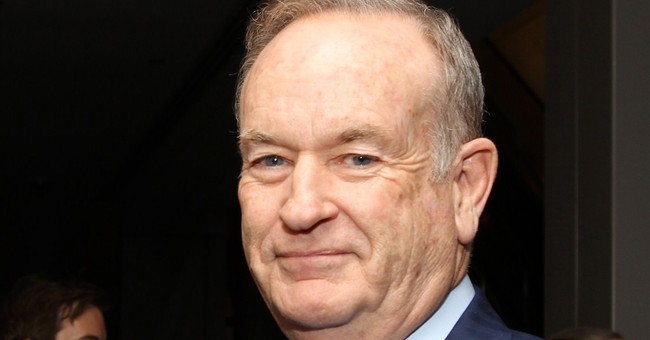 It was a surreal moment, with stunned viewers no doubt muttering to themselves, "Is the jig finally up?"

Will had written a negative review of the fifth of O'Reilly's co-authored "Killing" books, "Killing Reagan." So O'Reilly dared Will to appear on his "No Spin Zone" hot seat.

Will did -- and quietly punched some holes in O'Reilly's strange thesis that President Ronald Reagan had been metaphorically "killed" after a March 30, 1981 assassination attempt. According to "Killing Reagan," even years later the president may not have recovered enough to meet the demands of the office.

A number of outraged Reagan historians have questioned "Killing Reagan's" methods, sources and conclusions. So did Will. But Will added the stinger that the conservative O'Reilly and his co-author had played right into the hands of left-wing Reagan detractors. That heresy made O'Reilly go ballistic -- shouting, interrupting and accusing.

Of course, the embarrassing treatment of Will was not something new for the host of "The O'Reilly Factor." But this time, O'Reilly bullied a fellow Fox News contributor who kept calm and professional. And the dispute was not just over history and politics, but raised questions about O'Reilly's ethics and decorum.

As with Donald Trump, audiences never quite know where the ego of O'Reilly will drift, much less what he will say or do. Perhaps that's why they tune in to watch the blood sport. There's a similar phenomenon behind Trump's soaring poll numbers and apparent exemption from criticism over what and how he speaks.

Yet the substance of Will's telling critique won't so easily disappear. Viewers wonder: How does O'Reilly write a history book nearly every year, given his multitude of duties at Fox News?

He doesn't. Co-author Martin Dugard researches the book, O'Reilly apparently reviews and edits the text, and then transforms his prime-time cable news show into book promo and buzz.

After Dugard and O'Reilly had already killed off Kennedy, Lincoln, Jesus and Patton, the "Killing Reagan" book finally prompted scrutiny, and not just from Reagan scholars outraged over its content. The "killing" of somebody, however hyped, is not really why prime-time Fox News viewers tune in.

Roger Ailes, the genius behind the Fox News phenomenon, was quoted in a recent biography as saying of his franchise's meal ticket, "Bill O'Reilly is a book salesman with a TV show." Left unsaid is that O'Reilly is a money machine for Fox News.

During the exchange with O'Reilly, Will not only offered a contrast in temperament, he also wisely let O'Reilly talk and talk and talk. At the point when O'Reilly thundered that historians do not interview people who have "skin in the game" because they are firsthand participants in the making of history -- in the case of Reagan, people such as former Cabinet members George Shultz and Ed Meese -- Will seemingly did not know whether to laugh or cry.

Interviewing firsthand witnesses to history is precisely what historians seek to do. They can accept or reject all or part of these testimonies through time-honored methodologies. That sorting out of both bias and hero worship is precisely how a scholar seeks historical truth.

In other words, O'Reilly bristled at Will's suggestion that "Killing Reagan" was not really a work of history. And then he more or less confirmed Will's critical assessment on live television.

Many wonder whether O'Reilly's meltdown was a sort of Joseph Welch moment. Welch was the exasperated U.S. Army counsel who was outraged by Sen. Joseph McCarthy's bluster in a 1954 congressional hearing. Welch finally shot back, "Have you no sense of decency, sir?"

That rejoinder resonated, and it is often cited as the proverbial straw that broke the back of McCarthy's flamboyant career.

For some time, "The O'Reilly Factor" has been something much more than an opinion-journalism show. Ever larger segments are devoted to O'Reilly's hype of his books and work. News segments sometimes consist of videos of O'Reilly's appearances on other TV shows.

Guests are sometimes invited to critique O'Reilly's performances -- in the manner that Roman emperors supposedly dared critics to state their objections. The net effect is a creeping narcissism that has conspired to swallow the show hole. It's a pity, given that at one time O'Reilly's brass-knuckles inquisitions often forced slick politicians to admit what they otherwise might not have.

O'Reilly will co-write more slapdash best-sellers. He surely will continue to use his top-ranked cable news shows to do self-promo. And he may have more meltdowns to come, similar to the bizarre outburst directed at Will.

The question is whether they will always be excused as passing fits, or at some point will they become lasting embarrassments that cannot be allowed go on?