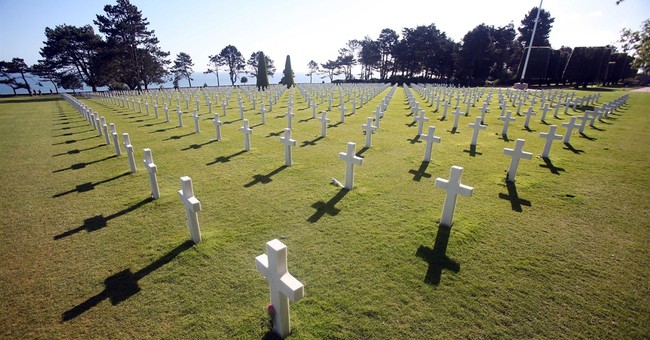 Seventy-one years ago, the British, Canadians and Americans landed on the Normandy beaches to open a second ground front against Nazi Germany.

Brilliant planning, overwhelming naval support, air superiority and high morale ensured the successful landing of 160,000 troops on the first day -- at a cost of about 4,000 dead.

On the Eastern Front, the German army was imploding under the weight of 5 million advancing infantrymen of Russia's Red Army. At the same time, Allied four-engine bombers, with superb long-range fighter escorts, at last were beginning to destroy German transportation and fuel infrastructure.

Yet Hitler held off for another 11 bloody months. Why?

What followed the D-Day landings was as confused as the initial assault was superbly carried out. Planners had underestimated the impassable terrain of the French boscage -- dense thickets planted along huge earthen berms -- just miles beyond the American sector beaches.

It would take most of June and early July for the stalled Americans to cut through the nearly impassable, well-defended hedgerows.

The stalled Allied armies had given time for the arrival of crack German Panzer reinforcements to bottle up the invaders. Finally, the Allies broke out with the help of massive carpet-bombing of German positions some six weeks after D-Day.

Unfortunately, the command structure of the Allied invasion force was topsy-turvy. The swashbuckling U.S. Gen. George S. Patton -- in the doghouse for the slapping of ill GIs a year earlier during the Sicily campaign -- came to Normandy late. His superb Third Army was relegated to a supporting role and assigned the longest route into Germany.

In contrast, the professional (but slow and methodical) Gen. Bernard Montgomery won the pivotal position in the north to break through to the Ruhr on the shortest path into the Third Reich.

Meanwhile, U.S. Gen. Dwight D. Eisenhower, the supreme commander of the Allied Forces, and his subordinates, Gens. Omar Bradley and Courtney Hodges, were reconciled to a slow, incremental slog through France along a broad front.

Patton, however, would have none of it. By early August, the Third Army was unleashed and off to the races -- in a series of brilliant armored outflanking movements that encircled and bypassed stunned German divisions.

Taking great risks, the mercurial Patton outsourced the protection of his flanks to the U.S. Air Force. Patton plowed ahead, seeking to stun, bewilder and collapse German resistance.

It almost worked. The Third Army "rolled" with Patton right through France to near the largely unguarded German border. An exuberant American media dreamed that the war in the West might be over by autumn 1944.

Hundreds of thousands of trapped Germans either surrendered or were killed by Allied pincers. British and American fighters blanketed the skies above nearly 2 million Allied soldiers, most of them motorized and protected by thousands of tanks and artillery pieces.

But then the wondrous American August came abruptly to an end.

Allied planners had never found a way to recapture intact the key French ports on the Atlantic Coast from besieged German defenders.

The farther Patton and other Allied armies advanced from the beaches, almost 400 miles away, the longer their supply lines grew -- and the easier it became for the enemy to support its own retreating forces.

In an unwise move, Eisenhower in early September had diverted gasoline and ammunition from the American sector to Montgomery's theater. Montgomery, in a risky gambit, planned to leapfrog across the Rhine from Holland into the German Ruhr Valley, hoping to paralyze Germany's industrial heartland and end the war outright.

The result, however, was the disastrous Operation Market Garden, or "A Bridge Too Far," catastrophe.

Meanwhile, Patton's advance sputtered by early September and ran out of gas. The Third Army, like other American forces, prepared for a mostly static war near the German border for the next six months.

The American nightmares of fighting in the Hürtgen Forest and the Battle of the Bulge lay ahead, as the war eventually turned into a World War I-style bloodbath until March 1945. The stalled Allies would lose more casualties from autumn 1944 to the end of the war than they had in the rapid advance from Normandy to the German border.

But for a brief moment in August 1944, everything seemed possible, as the American military had never experienced a breakthrough quite like George Patton's roll through German-occupied France 71 years ago this summer.