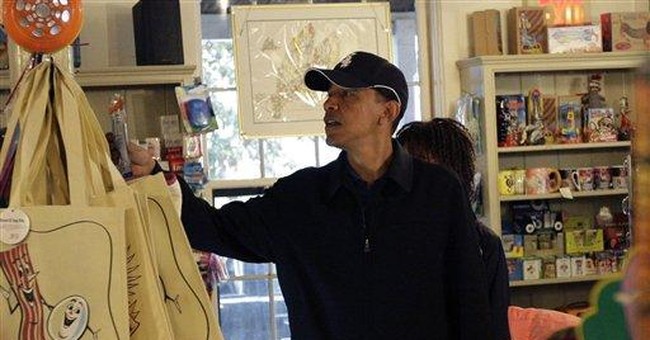 "NBC Nightly News" anchorman Brian Williams frequently fabricated a dramatic story that he was under enemy attack while reporting from Iraq. NBC is now investigating whether Williams also embellished events in New Orleans during his reporting on Hurricane Katrina.

Williams always plays the hero in his yarns, braving natural and hostile human enemies to deliver us the truth on the evening news.

CNN news host Fareed Zakaria, who recently interviewed President Obama, was caught using the written work of others as if it were his own. He joins a distinguished array of accused plagiarists, from historian Doris Kearns Goodwin to columnist Maureen Dowd.

Usually, plagiarism is excused. Research assistants are blamed or clerical slips are cited -- and little happens. In lieu of admitting deliberate dishonesty, our celebrities when caught prefer using the wishy-washy prefix "mis-" to downplay a supposed accident -- as in misremembering, misstating or misconstruing.

Politicians are often the worst offenders. Vice President Joe Biden withdrew from the presidential race of 1988 once it was revealed that he had been caught plagiarizing in law school. In that campaign, he gave a speech lifted from British Labor Party candidate Neil Kinnock.

Hillary Clinton fantasized when she melodramatically claimed she had been under sniper fire when landing in Bosnia. Her husband, former President Bill Clinton, was more overt in lying under oath in the Monica Lewinsky debacle. Former Sen. John Walsh (D-Mont.) was caught plagiarizing elements of his master's thesis.

President Obama has explained that some of the characters in his autobiography, "Dreams From My Father," were "composites" or "compressed," which suggests that in some instances what he described did not exactly happen.

What are the consequences of lying about or exaggerating one's past or stealing the written work of others?

Punishment is calibrated by the stature of the perpetrator. If the offender is powerful, then misremembering, misstating and misconstruing are considered minor and aberrant transgressions. If not, the sins are called lying and plagiarizing, and deemed a window into a bad soul. Thus a career can be derailed.

fabulist Jayson Blair and The New Republic's past stable of fantasy writers -- Stephen Glass, Scott Beauchamp and Ruth Shalit -- had their work finally disowned by their publications. Former Washington Post reporter Janet Cooke got her Pulitzer Prize revoked for fabricating a story.

Obscure Sen. Walsh was forced out of his re-election race. Biden, on the other hand, became vice president. It did not matter much that the Obama biography by Pulitzer Prize-winning author David Maraniss contradicted many of the details from Obama's autobiography.

Hillary Clinton may well follow her husband's trajectory and become president. The Rev. Al Sharpton helped perpetuate the Tawana Brawley hoax; he is now a frequent guest at the White House.

Why do so many of our elites cut corners and embellish their past or steal the work of others?

For them, such deception may be a small gamble worth taking, with mild consequences if caught. Plagiarism is a shortcut to publishing without all the work of creating new ideas or doing laborious research. Padding a resume or mixing truth with half-truths and composites creates more dramatic personal histories that enhance careers.

Our culture itself has redefined the truth into a relative idea without fault. Some academics suggested that Brian Williams may have lied because of "memory distortion" rather than a character defect.

Contemporary postmodern thought sees the "truth" as a construct. The social aim of these fantasy narratives is what counts. If they serve progressive race, class and gender issues, then why follow the quaint rules of evidence that were established by an ossified and reactionary establishment?

Feminist actress and screenwriter Lena Dunham in her memoir described her alleged rapist as a campus conservative named Barry. After suspicion was cast on one particular man fitting Dunham's book description, Dunham clarified that she meant to refer to someone else as the perpetrator.

Surely the exonerated Duke University men's lacrosse players who were accused of sexual assault or the University of Virginia frat boys accused of rape in a magazine article in theory could have been guilty -- even if they were proven not to be.

Michael Brown was suspected of committing a strong-arm robbery right before his death. He then walked down the middle of a street, blocking traffic, and rushed a policeman. Autopsy and toxicology reports of gunpowder residuals and the presence of THC suggest that Brown had marijuana in his system and was in close contact to the officer who fired. Do those details matter, if a "gentle giant" can become emblematic of an alleged epidemic of racist, trigger-happy cops who recklessly shoot unarmed youth?

The Greek word for truth was "aletheia" -- literally "not forgetting." Yet that ancient idea of eternal differences between truth and myth is now lost in the modern age.

Our lies become accepted as true, but only depending on how powerful and influential we are -- or how supposedly noble the cause for which we lie.