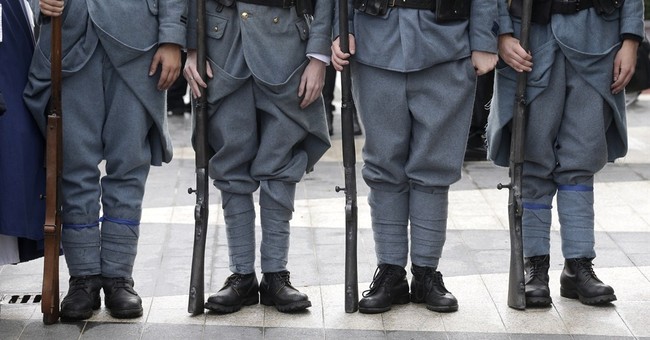 Trending
The world is changing and becoming even more dangerous -- in a way we've seen before.

In the decade before World War I, the near-hundred-year European peace that had followed the fall of Napoleon was taken for granted. Yet it abruptly imploded in 1914. Prior little wars in the Balkans had seemed to predict a much larger one on the horizon -- and were ignored.

The exhausted Austro-Hungarian and Ottoman empires were spent forces unable to control nationalist movements in their provinces. The British Empire was fading. Imperial Germany was rising. Czarist Russia was beset with revolutionary rebellion. As power shifted, decline for some nations seemed like opportunity for others.

The same was true in 1939. The tragedy of the Versailles Treaty of 1919 was not that it had been too harsh. In fact, it was far milder than the terms Germany had imposed on a defeated Russia in 1918 or the requirements it had planned for France in 1914.

Instead, Versailles combined the worst of both worlds: harsh language without any means of enforcement.

The subsequent appeasement of Britain and France, the isolationism of the United States, and the collaboration of the Soviet Union with Nazi Germany green-lighted Hitler's aggression -- and another world war.

We are entering a similarly dangerous interlude. Collapsing oil prices -- a good thing for most of the world -- will make troublemakers like oil-exporting Iran and Russia take even more risks.

Terrorist groups such as the Islamic State feel that conventional military power has no effect on their agendas. The West is seen as a tired culture of Black Friday shoppers and maxed-out credit card holders.
CARTOONS | AF Branco
View Cartoon

NATO is underfunded and without strong American leadership. It can only hope that Vladimir Putin does not invade a NATO country like Estonia, rather than prepare for the likelihood that he will, and soon.

The United States has slashed its defense budget to historic lows. It sends the message abroad that friendship with America brings few rewards while hostility toward the U.S. has even fewer consequences.

The bedrock American relationships with staunch allies such as Australia, Britain, Canada, Japan and Israel are fading. Instead, we court new belligerents that don't like the United States, such as Turkey and Iran.

No one has any idea of how to convince a rising China that its turn toward military aggression will only end in disaster, in much the same fashion that a confident westernizing Imperial Japan overreached in World War II. Lecturing loudly and self-righteously while carrying a tiny stick did not work with Japanese warlords of the1930s. It won't work with the communist Chinese either.

Radical Islam is spreading in the same sort of way that postwar communism once swamped postcolonial Asia, Africa and Latin America. But this time there are only weak responses from the democratic, free-market West. Westerners despair over which is worse -- theocratic Iran, the Islamic State or Bashar al-Assad's Syria -- and seem paralyzed over where exactly the violence will spread next and when it will reach them.

There once was a time when the United States encouraged the Latin American transition to free-market constitutional government, away from right-wing dictatorships. Now, America seems uninterested in making a similar case that left-wing dictatorships are just as threatening to the idea of freedom and human rights.

In the late 1930s, it was pathetic that countries with strong militaries such as France and Britain appeased fascist leader Benito Mussolini and allowed his far weaker Italian forces to do as they pleased by invading Ethiopia. Similarly, Iranian negotiators are attempting to dictate terms of a weak Iran to a strong United States in talks about Iran's supposedly inherent right to produce weapons-grade uranium -- a process that Iran had earlier bragged would lead to the production of a bomb.

The ancient ingredients of war are all on the horizon. An old postwar order crumbles amid American indifference. Hopes for true democracy in post-Soviet Russia, newly capitalist China or ascendant Turkey long ago were dashed. Tribalism, fundamentalism and terrorism are the norms in the Middle East as the nation-state disappears.

Under such conditions, history's wars usually start when some opportunistic -- but often relatively weaker -- power does something unwise on the gamble that the perceived benefits outweigh the risks. That belligerence is only prevented when more powerful countries collectively make it clear to the aggressor that it would be suicidal to start a war that would end in the aggressor's sure defeat.

What is scary in these unstable times is that a powerful United States either thinks that it is weak or believes that its past oversight of the postwar order was either wrong or too costly -- or that after Afghanistan, Iraq and Libya, America is no longer a force for positive change.

A large war is looming, one that will be far more costly than the preventative vigilance that might have stopped it.