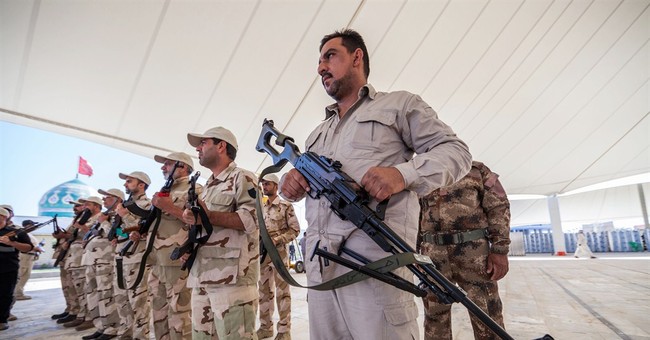 So who lost Iraq?

The blame game mostly fingers incompetent Iraqi Prime Minister Nouri al-Maliki. Or is Barack Obama culpable for pulling out all American troops monitoring the success of the 2007-08 surge?

Some still blame George W. Bush for going into Iraq in 2003 in the first place to remove Saddam Hussein.

One can blame almost anyone, but one must not invent facts to support an argument.

Do we remember that Bill Clinton signed into law the Iraq Liberation Act of 1998 that supported regime change in Iraq? He gave an eloquent speech on the dangers of Saddam Hussein's weapons of mass destruction.

In 2002, both houses of Congress voted overwhelmingly to pass a resolution authorizing the removal of Saddam Hussein by force. Senators such as Joe Biden, Hillary Clinton, John Kerry and Harry Reid offered moving arguments on the Senate floor why we should depose Saddam in a post-9/11 climate.

Democratic stalwarts such as Sen. Jay Rockefeller and Rep. Nancy Pelosi lectured us about the dangers of Saddam's stockpiles of weapons of mass destruction. They drew on the same classified domestic and foreign intelligence reports that had led Bush to call for Saddam's forcible removal.

The Bush administration, like members of Congress, underestimated the costs of the war and erred in focusing almost exclusively on Saddam's supposed stockpiles of weapons. But otherwise, the war was legally authorized on 23 writs. Most of them had nothing to do with weapons of mass destruction and were unaffected by the later mysterious absence of such weapons -- which is all the more mysterious given that troves of WMD have turned up in nearby Syria and more recently in Iraqi bunkers overrun by Islamic militants.

Legally, the U.S. went to war against Saddam because he had done things such as commit genocide against the Kurds, Shiites and the Marsh Arabs, and attacked four of his neighbors. He had tried to arrange the assassination of a former U.S. president, George H.W. Bush. He had paid bounties for suicide bombers on the West Bank and was harboring the worst of global terrorists. Saddam also offered refuge to at least one of the architects of the first World Trade Center Bombing in 1993, and violated U.N.-authorized no-fly zones.

A number of prominent columnists, right and left -- from George Will, David Brooks and William F. Buckley to Fareed Zakaria, David Ignatius and Thomas Friedman -- supported Saddam's forcible removal. When his statue fell in 2003, most polls showed that over 70 percent of Americans agreed with the war.

What changed public opinion and caused radical about-faces among the war's most ardent supporters were the subsequent postwar violence and insurgency between 2004 and 2007, and the concurrent domestic elections and rising antiwar movement. Thousands of American troops were killed or wounded in mostly failed efforts to stem the Sunni-Shiite savagery.

The 2007-08 surge engineered by Gen. David Petraeus ended much of the violence. By Obama's second year in office, American fatalities had been reduced to far less than the monthly accident rate in the U.S. military. "An extraordinary achievement" Obama said of the "stable" and "self-reliant" Iraq that he inherited -- and left.

Prior to our invasion, the Kurds were a persecuted people who had been gassed, slaughtered and robbed of all rights by Saddam. In contrast, today a semi-autonomous Kurdistan is a free-market, consensual society of tolerance that, along with Israel, is one of the few humane places in the Middle East.

In 2003, the New York Times estimated that Saddam Hussein had killed perhaps about 1 million of his own people. That translated into about 40,000 deaths for each year he led Iraq.

A Saddam-led Iraq over the last decade would not have been a peaceable place.

We can also imagine that Saddam would not have sat idly by the last decade as Pakistan and North Korea openly sold their nuclear expertise, and as rival Iran pressed ahead with its nuclear enrichment program.

Nor should we forget that the U.S. military decimated al-Qaeda in Iraq. Tens of thousands of foreign terrorists flocked to Anbar Province and there met their deaths. When Obama later declared that al-Qaeda was "on the run," it was largely because it had been nearly obliterated in Iraq.

Launching a costly campaign to remove Saddam may or may not have been a wise move. But it is historically inaccurate to suggest that the Iraq War was cooked up by George W. Bush alone -- or that it did not do enormous damage to al-Qaeda, bring salvation for the Kurds, and by 2009 provide a rare chance for the now-bickering Iraqis to make something out of what Saddam had tried to destroy.