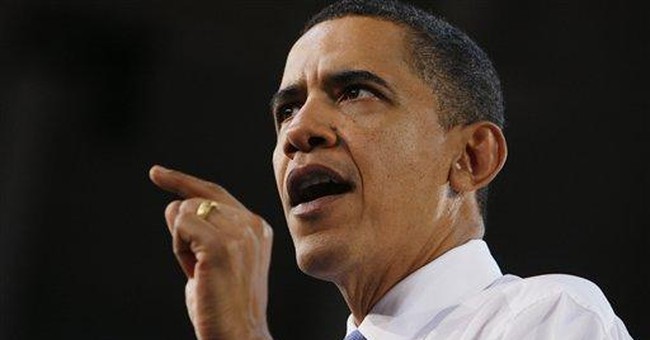 Almost every element of Barack Obama's once-heralded new "reset" foreign policy of a year ago has either been reset or likely soon will be.

Consider Obama's approach to the 8-year-old war on terror. Plans made more than a year ago to shut down the detention center at Guantanamo Bay by January 2010 have stalled. Despite loud proclamations about trying Khalid Sheik Mohammed, the architect of 9/11, in a civilian court in New York, such an absurd pledge will probably never be kept.

Talk of trying our own former CIA interrogators for being too tough on terrorist suspects has also come to nothing. And why not put an end to the second-guessing of anti-terrorism protocols since the Obama administration, in a single year, has quadrupled the number of assassinations by Predator drones of suspected Taliban and al-Qaida operatives in Pakistan? After all, the targeted killing of hundreds of suspects is far more questionable than waterboarding three confessed killers.

The Obama administration seems to have embraced the once widely criticized Bush-Petraeus strategy in Iraq of gradual withdrawal in concert with Iraqi benchmarks. Indeed, Vice President Joe Biden in Orwellian fashion claims that our victory in Iraq may be one of the administration's "greatest achievements." Was it not a defeatist Biden who not long ago advocated the trisection of Iraq into separate nations?

And after months of waiting, Obama finally sent more troops to Afghanistan, adopting a surge strategy that looks a lot like Bush's 2007 escalation in Iraq -- this after he once assured the country that Bush's surge, in a tactical sense, "wasn't working."

Almost all of the once derided Bush anti-terrorism protocols are still in place -- wiretaps, intercepts, tribunals, and renditions. And given that there were more foiled radical Islamic terrorist plots in 2009 than in any year since 2001, President Obama will probably stop his outreach speeches to the Islamic world and his serial recitations of American sins.

Our efforts to reach out and negotiate directly with Iran failed. Secretary of State Hillary Clinton effectively acknowledged the impasse, citing the unexpected de facto military coup by the Revolutionary Guard. In any case, does anyone believe that more Obama speeches, videos, new diplomacy and imposed deadlines will halt an Iranian nuclear bomb?

President Obama was once a fierce critic of the former administration's Mideast policies. A year ago, he thought new outreach to the Palestinians and rebuke to the Israelis might lead to a breakthrough. It did not. In a Time magazine interview with Joe Klein, Obama confesses of the 70-year struggle: "I'll be honest with you. This is just really hard."

Obama assumed we could borrow a trillion dollars from the communist Chinese and then turn around and lecture them on Tibet, human rights, and international trade and currency -- sort of like a debtor admonishing his lender about his bank's shortcomings. Now the Chinese claim that their relations with America are "seriously disrupted," as they seek to dethrone the dollar as the global currency.

I don't think there will be anymore grand deals with the Russians either, the sort that saw the United States withdraw anti-missile defense accords with Poland and the Czech Republic in hopes of halting the Iranian nuclear program. Instead, Russia and China are blocking American efforts to impose tougher sanctions on Iran.

For all the outreach to Hugo Chavez, the Venezuelan strongman is still causing trouble in Latin America.

So why is the reset foreign policy being reset?

First, too often Obama boxed himself into a corner by being against, in knee-jerk fashion, almost anything George Bush was for. Yet most of America's problems predated George Bush, who, especially in his second term, followed mostly centrist policies. Old enemies were enemies for a reason -- and it had nothing to do with Bush.

Second, Obama's utopian rhetoric created impossible expectations of a new international brotherhood. So the disappointment became greater when nations simply acted like their usual self-interested selves instead of idealistic groupies at an Obama hope and change rally.

Third, the constant televised presence of Obama on his 24/7 bully pulpit has surely resulted in Obama fatigue. Most nations don't seem to fear any of his deadlines or appear mesmerized by his soaring rhetorical flourishes.

Fourth, the nearly $2 trillion dollar annual deficit curbs both the moral and material power of the United States, which has gone into hock to unsavory nations.

Fortunately, for the country, Obama did not take three years to reverse course, unlike Jimmy Carter whose inaction led to a series of foreign policy catastrophes like the 1979 Soviet invasion of Afghanistan and the storming of the U.S. embassy in Tehran.

By voluntarily backtracking -- or being rebuffed -- on almost all his initiatives, an idealistic Obama is reminding the world that anti-Americanism abroad is not caused so much by what the United States does, but largely by preconceived hostility to the values of liberty, free markets, and individual rights that the United States represents.