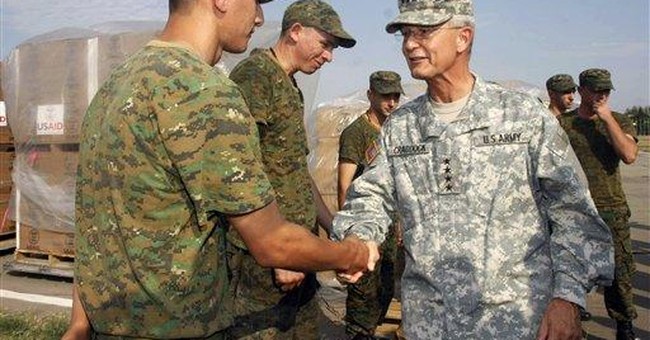 When I was growing up in the 1960s, we had a majestic Santa Rosa plum orchard on my family's farm. The trees were 40 years old and had grown to over 20 feet high. My grandfather would proudly recall how its once-bumper crops of big, sweet plums had helped him survive the Depression and a postwar fall in agricultural prices.

But by the 1960s, the towering, verdant trees were more a park than a profitable orchard. The aged limbs had grown almost too high to pick, the fruit there too few and too small to pack profitably. Yet my grandfather simply could not bring himself to bulldoze the money-losing, unproductive old orchard.

The North Atlantic Treaty Organization is like that noble Santa Rosa orchard. We all remember how NATO once saved Western Europe from the onslaught of global communism. Its success led to the present European Union. The Soviets were kept at bay. The Americans were engaged, while the postwar German colossus remained peaceful. A resurgent Europe followed, secure enough to prosper while complacent enough to slash defense expenditures and expand entitlements.

After the victory of the Cold War, NATO's raison d'etre became more problematic -- even as its theoretical reach now went all the way to the old borders of the Soviet Union. Yet, without the Soviet menace that had prompted the alliance, what justified the continued need for transatlantic collective defense?

We saw NATO's paralysis in the European inaction over Serbia's ethnic cleansing in the 1990s. When NATO finally acted to remove Slobodan Milosevic in 1999, the much-criticized intervention proved little more than a de facto American air campaign.

Article 5 of NATO's charter requires its members to come to the aid of any fellow nation that is attacked. But when it was evoked after Sept. 11 for the first time, NATO -- other than a few European gestures such as sending surveillance planes to fly above America -- didn't risk much abroad to fight Islamic terrorists.

Australia, a non-NATO member, is doing far more to fight the Taliban than either Germany or Spain. Many Western European countries have national directives that prevent aggressive offensives against the Taliban and other Afghan insurgents, overriding NATO military doctrine.

Take away Canada, the United Kingdom and the U.S. from Afghanistan and the collective NATO force would collapse in hours.

The enemy in Afghanistan knows this. The savvy and sinister Taliban just targeted the French contingent. It figured the loss of 10 French soldiers might have a greater demoralizing effect on French public opinion than Verdun did in 1916, when France suffered nearly a half-million casualties in heroically stopping the German advance. But 90 years ago, France kept on fighting to win a war. Now, the French parliament may meet to discuss withdrawal altogether.

There is much talk that had Georgia been a NATO member, Russia might not have attacked it. The truth is far worse. Even if Georgia had belonged to NATO, no European armed forces would have been willing to die for Tbilisi. Remember the furor in 2003 when some NATO countries -- angry at the United States -- tried to block support to member Turkey should Saddam's Iraq have retaliated against Ankara for the American invasion to remove him.

The well-intended but ossified alliance keeps offering promises to new members that are weaker, poorer and in more dangerous and distant places, but its old smug founding states are ever more unlikely to honor them.

In the last two decades, the safety of a rich Western Europe also spawned a new continental creed of secularism, socialism and anti-Americanism that embraced the untruth that the United Nations kept the peace while the United States endangered it. But if a disarmed continent counted on continued expensive American protection, then it was suicidal to mock its protector.

If NATO dissolves, Europe will at least receive a much-needed reality check. It might even re-learn to invest in its own defense. European relations with America would be more grounded in reality, and the United States could still forge individual ties with countries that wished to be true partners, not loud caricatures of allies.

That stately Santa Rosa orchard? When it finally was toppled, uprooted and cut up, we all nearly wept -- but my grandfather had new varieties of plum trees planted in its place by the next spring.

Why Wall Street Is 'Losing Its Mind' Right Now
Townhall
Journos writing about the @Kelliwardaz/@AZGOP story need a lecture on the proper use of 'Dr.'
Twitchy
What Happened With GameStop, Reddit, and Some Wall Street Hedge Funds -- and What Might It Mean?
Redstate
The Morning Briefing: Sycophant Press Can't Cover for Biden's Opening Train Wreck
PJ Media