President's Immigration Plan Could Use Some Work

Veronique de Rugy
|
Posted: May 23, 2019 12:01 AM
Share   Tweet
The opinions expressed by columnists are their own and do not necessarily represent the views of Townhall.com. 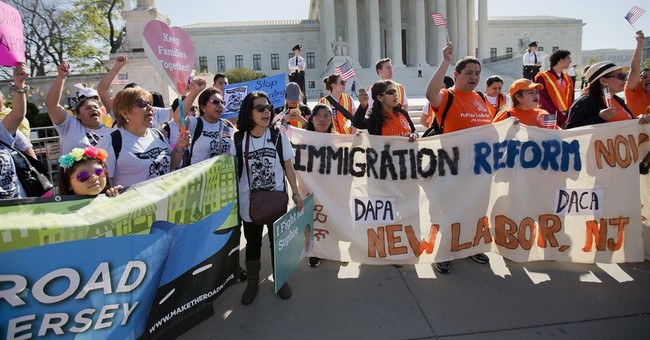 Last week, the Trump administration released the outline of an immigration plan meant to reshape how and which people are allowed into the United States. The plan would prioritize merit-based immigration and high-skilled labor over those who already have family here. Far from comprehensive or sufficient, it's a modest improvement over the administration's previous restrictive pushes.

The plan's centerpiece is a shift toward a "merit" system very similar to those in place in Australia and Canada. The reform would boost skill-based immigration from 12% to 57%, while decreasing family-based and lottery-based immigration by 50%. This is great news for employers in the market for high-skilled workers. Indeed, the cap for H-1B visas (for temporary, skilled workers) and employment-based green cards has not increased for many years, while the U.S. workforce has grown by 38 million since these programs' inception.

During his testimony this week before the House Committee on Small Business, my colleague Daniel Griswold advised members of Congress that in order to better serve our booming economy -- especially the tech and health care industries but also future American businesses (large and small) -- increasing the number of high-skilled workers is key. He suggests tripling of the number of H-1B visas to 195,000 and doubling the 1990 cap of 140,000 of employment-based green cards.

Griswold rightfully recommends that "spouses and minor children of the primary green card worker should be exempt from the cap" to preserve family units without taking away from our ability to attract more workers. Finally, he also suggests repealing the per-country quotas on green cards, which counterproductively discriminate against immigrants based on their country of origin.

It is baffling that anyone would seriously call for cutting overall levels of immigration. As the great professor and economist Julian Simon used to assert, people are the ultimate resource and with more people come more brains and the promise of greater things to come.

It's even more stunning to call for lower levels of immigration during an economic boom with the lowest unemployment rate in half a century. In fact, a recurring complaint from the business community is the difficulty of finding enough employees. This is true from high-skilled jobs in manufacturing to low-skilled ones in retail and the restaurant industries.

At the very least, for now, it appears that the president's son-in-law Jared Kushner is the person behind the plan and has managed to squash this destructive idea. That said, this plan falls short in many ways. Here are a few:

First, it fails to enhance the legal immigration of low-skilled workers in spite of the many studies that show the benefits of importing labor. This is the result of the president's misguided belief that -- contrary to academic evidence -- those foreigners who come to the United States to work as housecleaners, gardeners, construction workers, kitchen helpers and nannies aren't good for Americans and America. Yet, in a country where wages are growing, access to low-skilled workers would help even more workers come back into the labor market.

Furthermore, as The Wall Street Journal recently editorialized, "Merit systems don't measure entrepreneurship and would keep out many less-skilled workers who start small businesses like the neighborhood dry cleaner." Added to the plan's failure to streamline the guest-worker visas, this amounts to a serious opportunity cost for the country.

The administration's proposal also fails to resolve the issue with the "Dreamers," who are condemned to stay in limbo. And it does nothing to give the current illegal population -- two-thirds of whom have already been here for a decade or more -- a more stable and legal status.

With the Democrats unwilling to give any proposals coming from the administration a chance on the House's floor, including this one, this proposal is better understood as a political document than a serious legislative proposal. As such, it fails to be aspirational and implement a comprehensive and needed immigration plan. Yet, it should be commended for putting an end to the nonsense about scaling back legal immigration.