Veronique de Rugy
|
Posted: Sep 20, 2018 12:01 AM
Share   Tweet
The opinions expressed by columnists are their own and do not necessarily represent the views of Townhall.com. 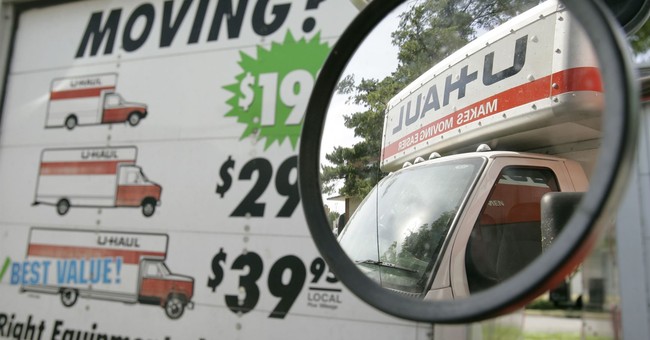 Americans move from one state to another for a variety of reasons. They move to retire, to find jobs, to lower their housing costs or to enjoy nicer weather. While experts disagree about whether tax competition between states plays a large or small role in these relocation decisions, a new study finds that taxes are actually a factor for migration and will increase in importance as a result of the 2017 tax reform.

That new study on Tax Reform and Interstate Migration is from Chris Edwards, a tax expert at the Cato Institute. Using 2016 data from the Internal Revenue Service, he finds that 578,269 people moved, on net, from the 25 highest-tax states to the 25 lowest-tax states. That's a loss of $33 billion in aggregate income for these vacated states. In that year, 24 of the 25 highest-tax states suffered from net out-migration. The only high-tax state that saw in-migration was Maine.

No matter how one views and dissects the data, Edwards shows that state tax levels and net migration flows are highly correlated. The relationship is even more pronounced with households headed by a person age 65 or older and households with income higher than $200,000. It might not come as a surprise that some of the states both seniors and high earners are leaving are Alaska, Connecticut, California, Illinois, Maryland, New Jersey, New York, North Dakota, Pennsylvania and West Virginia. The top 12 destinations for these taxpayers are Arizona, Colorado, Florida, Idaho, Montana, North Carolina, Nevada, Oregon, South Carolina, Tennessee, Utah and Washington.

As Edwards rightly explains, the recent tax reform will make these trends even more potent. By limiting to $10,000 the amount of state and local taxes, or SALT, that people can deduct from their federal tax bill, many in high-tax states will feel the bite of their taxes more than they did before. High-income earners will be highly affected by the change since they use the deduction the most and deducted larger sums of money before the reform. This will increase their overall out-migration from the high-tax states where they may currently reside for the benefit of living in lower-tax states.

Another Cato study from 2016 called Freedom in the 50 States finds a strong correlation between migration and economic (fiscal and regulatory) freedom after controlling for climate and other variables. In other words, people tend to move to economically freer states. This makes sense since economic freedom tends to be a fairly good indicator of prosperity, as economists Chris Doucouliagos and Mehmet Ali Ulubasoglu showed in their review of 45 studies that analyzed the economic freedom-growth relationship. They concluded, "regardless of the sample of countries, the measure of economic freedom and the level of aggregation, there is a solid finding of a direct positive association between economic freedom and economic growth." More economic growth usually means more jobs, which are definitely an important factor in migration.

This, then, raises the question of why so many people still live in the least-free states like New York and California. The fact is that when it comes to where people choose to live, intrinsic characteristics of a state weigh heavily in the decision. Among the factors that keep people in less-than-free places are jobs, family, friends and local amenities. In other words, there's a certain stickiness to states that have nothing to do with how free these places are.

There are times, however, when that stickiness is significantly reduced -- for example, when a taxpayer is younger, or looking for a job and hasn't settled anywhere, or about to retire. In those cases, economic freedom tends to matter a lot. This explains why Florida -- which is not a perfect libertarian heaven but has no income tax -- is a top destination for retirees.

Edwards' study shows that tax competition between states is alive and well. Now imagine how much more potent this competition would be if the biggest tax bill we have to pay each year weren't the federal tax bill. The uncontrolled growth of the federal government tax bite, whether through the income tax, the payroll tax or both, has taken too much juice out of the competition between states. The SALT reform is helping restore some of it, which means that high-tax states better start providing better benefits to taxpayers at lower costs if they don't want to pay an even higher out-immigration price.

Share this on Facebook
Tweet
Jill Biden Campaigns for Terry McAuliffe: 'You Need Somebody That You Can Trust'
Landon Mion
Joe Manchin Has a Message for 'Self-Declared Independent Socialist' Bernie Sanders
Rebecca Downs
Bernie Sanders Says the Media is to Blame for Americans Not Knowing What is Included in Spending Plan
Landon Mion
There's Already Fallout from the Release of Drafted Materials from Biden's Commission on Supreme Court