Veronique de Rugy
|
Posted: Oct 26, 2017 12:01 AM
Share   Tweet
The opinions expressed by columnists are their own and do not necessarily represent the views of Townhall.com. 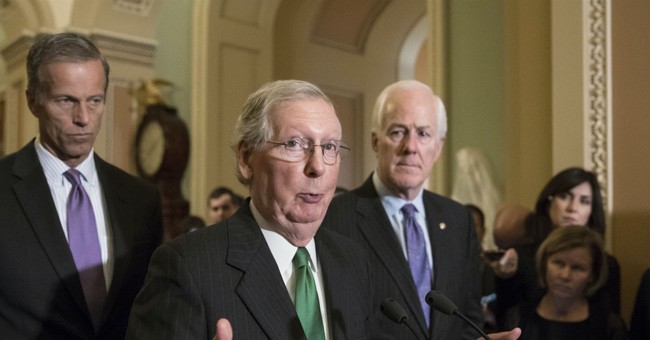 The good news is that there's a debate in Washington about how to make the tax code less destructive. The bad news is that lawmakers will be able to achieve much less than they otherwise could because of bad policy priorities.

It's obvious that Congress and the White House are unwilling to cut or even restrain spending to pay for tax reform. Indeed, the budget resolution that passed the Senate calls for a tax reform bill that would increase the deficit by $1.5 trillion over ten years with no savings worth mentioning. As a result, there's little leeway to mix tax cuts with tax reform. Moreover, failing to restrain spending today while cutting taxes means that taxes will have to go up in the future to pay for larger deficits.

Sens. Bob Corker, R-Tenn., and Rand Paul, R-Ky., sounded the alarm and were loudly criticized. In contrast, the House budget called for tax cuts to be paid for with spending cuts, asking for some $200 billion in savings over ten years. Under pressure to pass tax reform, however, the House is ready to throw away all pretenses of fiscal responsibility and adopt the Senate bill.

Making matters worse, Republicans insist that they want to give a real tax cut to the middle class. Though politically expedient, it wouldn't be wise. There's very little economic growth to be expected from reducing the marginal tax rates on middle-income earners. Additionally, there isn't actually much in taxes that could be cut from those in the middle class because they barely shoulder any of the income tax burden in the first place. For them to pay even less than they already do, many would have to pay no income taxes at all through a larger standard deduction and child tax credit. This would make tax reform more expensive and make the fight against big government more difficult. Without any tax skin in the game, Americans don't call for smaller government. And with no spending cuts and fewer taxpayers, who would pay the government's bills? There simply aren't enough rich people for that.

These policy decisions have consequences. The main one is that lawmakers are left scrambling to find more revenue to pay for a few tax reform ideas. And though there are a lot of tax exemptions they could cut or limit to pay for tax reform, some in the White House have set their sights on counterproductive targets.

First, Republicans again floated the idea of reducing the 401(k) tax deduction from $18,500 to $2,400. This is a terrible idea. 401(k) plans are a central part of retirement security for millions of Americans. As of now, 75 percent put more than $2,400 into their 401(k) accounts during any given year, meaning this change would incentivize many to save less. Thank goodness, President Donald Trump tweeted, as he did the first time this idea surfaced, that no change should be made to this deduction. Unfortunately, House Ways and Means Committee Chairman Kevin Brady is still considering the idea.

Second, the tax reform framework originally called for reducing the number of tax brackets we have, from seven to three. However, the administration backpedaled and announced no change to the top marginal rate of millionaires. So that's four rates, including 39.4 percent for millionaires. I get that they want to kill two birds with one stone -- to appear as if they aren't cutting taxes for the rich while raising up to $400 billion over ten years.

It's true that little economic growth could be expected from lowering the top rate from 39 to 35 percent, but what they're doing is politically sloppy and potentially dangerous. Higher-income earners are the most responsive to changes in the tax rates. So though the current rate isn't terrible, it could be once the Democrats are in power or revenue-hungry Republicans prevail. Research has also shown that higher tax rates greatly influence the decisions made by future higher-income earners. In other words, the consequences of this policy decision might be minor today but ultimately counterproductive.

There are many more bad ideas floating around the Capitol and the White House, such as a proposal to give up on cutting the state and local tax deduction or to agree to a minimum tax hike (which no one even asked for in the context of tax reform) in exchange for business tax cuts (which aren't at risk).

Republicans are known for being bad negotiators on top of being fiscally irresponsible. This tax debate may reinforce these beliefs.