In Masterpiece, the Supreme Court Grapples With a Problem of Its Own Making

Travis Weber
|
Posted: Dec 06, 2017 9:15 AM
Share   Tweet
The opinions expressed by columnists are their own and do not necessarily represent the views of Townhall.com. 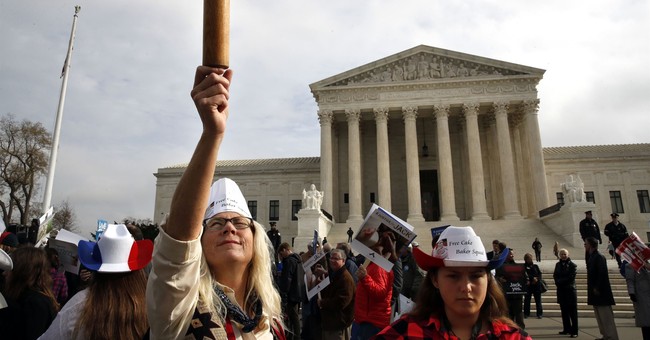 At Tuesday’s oral argument in Masterpiece Cakeshop v. Colorado Civil Rights Commission—which will decide whether baker Jack Phillips can be forced by the state to design and create a cake celebrating a same sex wedding—it became apparent quite early on that the Court was grappling not merely with Jack’s case, but with a number of potential conflicts between religious freedom and same-sex marriage on its hands.

Recognizing that the issues Jack faces in this case are sure to arise again, the justices struggled with where to draw the line for a constitutional rule which will protect First Amendment rights in light of the legal regime which the Court itself imposed on the country just two years ago in Obergefell v. Hodges.

If Jack is engaged in protected artistic expression under the First Amendment, the justices wondered at argument, who else might be? Is the florist, wedding invitation designer, makeup artist, hairstylist, dessert artist, or chef? These individuals need First Amendment protection too now due to the threat of Obergefell. Yet if they are found to not be engaged in expression and granted First Amendment protection, they are all at risk of being forced to lend their creative talents to same-sex wedding ceremonies. The Court must now deal with having to protect all of them—and more—in light of its decision in Obergefell.

This wasn’t an unforeseen problem. As the Court considered Obergefell, many warned of potential religious freedom problems. Developments over the last several years have borne out that prediction, with scores of conflicts involving businesses, public servants, employees, non-profit organizations, schools, and even churches. The Court has much more than just Jack Phillips on its hands.

The significant scope of the religious freedom issues implicated by Jack’s case only became more apparent as the argument wore on.

This scope includes religious freedom in the professions. Chief Justice Roberts led the questioning of the attorney for the state of Colorado by asking if, under his legal theory, a group of Catholic lawyers offering pro-bono legal services could be forced to take cases supporting same-sex couples. The lawyer representing Colorado replied that they could.

This also includes religious freedom for schools and universities. When Justice Alito asked David Cole of the ACLU, which also argued against Jack in this case, whether “Colorado can compel a religious college . . . whose creed opposes same-sex marriage to provide married student housing for a married same-sex couple or allow a same-sex wedding to be performed in the college chapel,” after a bit of hemming and hawing, Cole admitted that the state could force this on the college. This is the precise threat that former Solicitor General Donald Verrilli hinted at during oral argument several years ago in Obergefell.

Yet the religious freedom “promise” of Obergefell—that “[m]any who deem same-sex marriage to be wrong reach that conclusion based on decent and honorable religious or philosophical premises, and neither they nor their beliefs are disparaged here”—must be honored here, or fail everywhere else. Unfortunately, the ACLU and Colorado seem intent at chipping away at it. When Chief Justice Roberts raised this passage from Obergefell during argument, the ACLU moved the goalposts, claiming this passage was just about pure speech, not actions like Jack’s in this case.

May the Court now dig in and refuse to move the goalposts. The freedom of many depends on it.