Marriage Is a Religious Liberty Issue 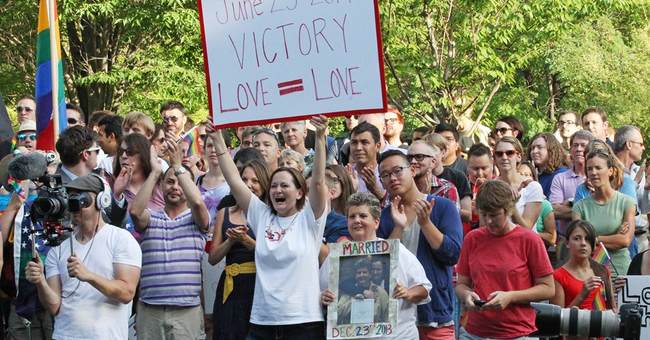 How does same-sex marriage affect my life? Why can’t we live and let live?

On August 6th, the 6th Circuit Court of Appeals will hear arguments in challenges to several state laws defining marriage as the union of a man and a woman. Many Americans may respond: “What do I care? That doesn’t affect me.”

Well, that’s not exactly true. These cases affect your freedom – including your religious freedom. How, exactly, you might ask?

The freedom and prosperity offered by the United States has been made possible largely by its citizens’ moral and ethical self-governance. This self-governance is in turn made possible by a unifying bond of an ethical and cultural worldview. In the United States this view is one which upheld marriage as a union between a man and a woman, and which assumed accountability to God as a principle by which to live. This unifying view has religion at its core, along with a view of marriage informed by religion.

America’s early settlers, who transplanted their religion and culture from Europe, cared about religious freedom, which eventually was firmly established in law. Preserving this religious freedom up to the present day has largely been possible because of the cultural unity of the United States. While courts from time to time have restricted legislative action by the majority when upholding constitutional rights, the unifying view of marriage was left untouched, thus preserving the freedom of traditional religious views on this subject. Yet that is changing.

No one would say this is something that should be played with lightly. Yet it has been. Federal judges have been bulldozing the will of majorities of citizens and rejecting the natural view of marriage, while using legal reasoning that would be called into question in any first year law-school writing class.

As judges are wreaking havoc on the legal landscape, the law is suddenly condemning the religious worldview of millions of Americans. These Americans may be expected to fall into line and accept this new version of marriage, but that is impossible.

Sure, they can still live, eat, breath, and sleep while living in a land where the government blesses same-sex contracts as “marriage.” But they can’t be forced to accept and approve of the idea as good. To do so, they would have to deny their religion.

Many may think that they can live in a world in which same-sex marriage is permitted, and retain their religious freedom. Yet the view grows bleak as it becomes obvious that demands for same-sex “marriage” are only one manifestation of a campaign to compel approval of same-sex sexuality. “Marriage” is merely the vehicle. Behind the demand for “rights” is a demand that “you must approve.”

We need only look to the news for other evidence of this threat. Recently, after Gordon College signed a letter asking that any potential Executive Order prohibiting discrimination on the basis of sexual orientation include an exemption for religious entities, the city of Salem cancelled a contract with the school, thousands of people signed an online petition protesting this signature, hundreds of current and former students sent a letter in opposition, and Gordon is now “on the agenda” of its accreditation body’s upcoming meeting. This all despite the fact that the school president’s “sole intention in signing this letter was to affirm the College’s support of the underlying issue of religious liberty.”

Other examples involve a wedding photographer who was successfully sued for not wanting to photograph a same-sex “wedding” and a baker forced to undergo “reeducation” for refusing to bake a wedding cake for a gay couple’s “wedding.” The list goes on.

This actually shouldn’t surprise anyone. If God is not to be consulted on the matter, same-sex attraction will be advanced as a good thing, and of course the anachronistic “bigots” must go. Marriage must be demolished because it represents God’s outdated ways. The outdated holdouts must be corrected and come to accept this superior view of the new sexuality, which will usher in a new age of enlightenment.

These cases and issues merely manifest on the surface what is brewing in the underlying culture. No one is immune from this reordering of society – even ministers and the pressure will eventually affect churches.

Acceptance of the “right” to same-sex marriage will mean that same-sex sexuality must be accepted as a good thing, and no one can oppose it or even think otherwise. Yet the religious framework that has guided our nation for over two hundred years says otherwise. This religious framework will have to go. When it goes, your religious liberty, which forms the foundation for all our other freedoms, goes with it.