Townhall.com Staff
|
Posted: May 17, 2022 11:10 AM
Share   Tweet
The opinions expressed by columnists are their own and do not necessarily represent the views of Townhall.com. 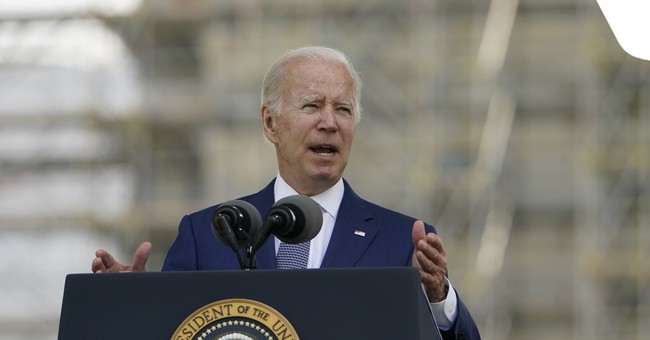 Joe Biden and his radical administration are destroying our great country, and the American people know it. We all feel the pain at the grocery store and gas pump as leftist policies continue to cause inflation to skyrocket. Yet this isn’t stopping old, senile, corrupt Joe from considering stealing from hard-working Americans to pay off the college debt of woke leftists who can't find a job with their BS gender studies degrees.

Across the country, mothers and fathers are frantically searching for baby formula as supply chain and production issues are putting the health and well-being of society’s most vulnerable at risk.

And who at the White House is tackling this problem? No one that we can find.

And did you see last quarter’s GDP numbers? The economy shrank. We’re heading toward a deep recession.

Now more than ever, we must fight back against these leftists and their destructive policies to save America. But we need your help to continue doing so.

By joining Townhall VIP, you will become part of the Townhall army working to save America. We don’t follow the leftist narrative, and we won't back down. Join us in this war.

There are no ads—just pure conservative writing that will arm you with the truth and cut through the liberal media’s BS. Every penny is devoted to telling the truth liberals don't want you to know and ensuring the decimation of the left and saving America.

Of course, the radical left is doing everything it can to excite its voter base. That’s why the pro-abortion crowd is pushing the issue of “abortion rights” and harassing our conservative Supreme Court justices. They have nothing to run on, and they know it. But good luck winning elections by promoting baby killing and destroying the country.

Our Supreme Court justices are being targeted. Members of the pro-abortion mob have assaulted pro-life supporters. Molotov cocktails were thrown into the office building of the pro-life organization Wisconsin Family Action, and its walls were graffitied with a sinister message: “If abortions aren’t safe, neither are you.” And churchgoers have been harassed at their places of worship.

We’re less than six months away from the November elections, and Joe Biden has already caused so much destruction and fueled so much chaos in less than a year and a half. Politically speaking, six months is a lifetime, but now is not the time for conservatives to be complacent. We must take back Congress. In January 2023, we must kill the Biden agenda.

By becoming a Townhall VIP member, you’ll not only directly support the long war in defeating leftism and telling the truth, but you’ll also get exclusive columns from Katie Pavlich and Kurt Schlichter, plus Kurt's VIP members-only "Stream of Kurtiousness" video series and "Unredacted" podcast.