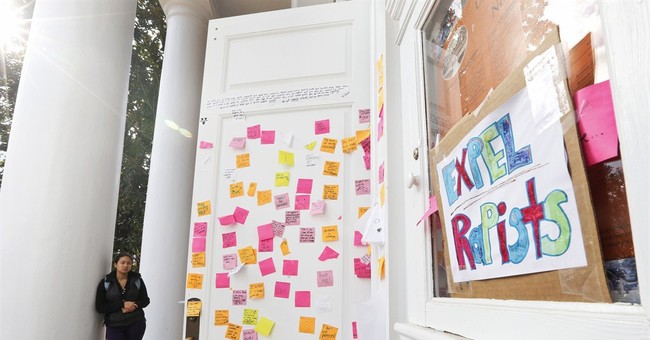 There are no journalists at Rolling Stone.

With the facts in, or the lack of facts, the clear and consistent truth is that Sabrina Rubin Ederly, author of the now-defunct story of the rape of "Jackie" at the University of Virginia is not a journalist, nor are the editors of RS worthy of their titles.

They can best be described as Narrativists; Insistent, ideologically-obedient automatons who follow, perpetuate and reinforce select, progressive narratives. Narrativists allow stories to rise through their ranks based on their Narrative Value, and not based on fact.

The Narrative Value is the importance or usefulness of the Narrative based on its ability to reinforce desired memes and preconceptions that are beneficial to select, desired classes and entities, including political parties.

Certainly, this must be true. How else did the story of Jackie not get further review (really, any review) of some kind? How did it go from idea to print with out a single silver of intellectual curiosity? The Narrative Value was worth more than the investigated facts.

On this day, Rolling Stone was selling the narrative that college is perpetuating a rape culture/college guys are depraved animals/"no means no" even after consent/anything involving a penis is rape/all women are victims at all times/universities don't protect women. No matter which, as they are interchangeable and ever evolving. It is what the Narrativist needs it to be when they need it to be. No wonder narrative selling is such big business!

All sellers need a buyer (or buyers.) In this case, people like Sally Kohn of CNN and blogger Amanda Marcotte clicked on the checkout button. They bought the narrative because, as the expression goes, it fit. It's the same reason you buy jeans or a pair of shoes or a winter coat - comfort, style, how it makes you feel, how others will look at you when you wear it, for status.

Compare it to shows like A&E’s Pawn Stars and American Pickers. It’s always fun to watch them when they are buying things they know about, things that fit their expertise. But the real drama comes from when they take a shot on an item they are unsure of.

Was this rifle used in the Civil War? Is it that special train set from the 1930’s? Did this headlight come off a 1940’s Indian motorcycle?

Sometimes, they hit pay dirt! The gamble works out and the item is worth more than they ever dreamed. Other times, they lose, and lose big. Why did they lose? Because they failed to do the due diligence necessary to protect their investment.

That’s Rolling Stone. In their effort (see desire, want, need, obsession) to have a story fit the narrative, they never checked the story. They avoided, at great lengths, due diligence. Rolling Stone is a bad buyer. And they lost. Huge.

But who decided the worth of the train set or the headlight? When the Old Man or Frank Fritz need to find out if their gamble has value, they go to an appraiser; an expert who has a long history with the subject in question, and whose reputation for putting facts above personal desires is absolute.

Fortunately, media has appraisers. They look at a story and the facts of the story, and see if those facts support the story. Simple? No.

Sometimes all the facts aren’t in the story. Like we saw with Rolling Stone (and the second look continues into Lena Dunham’s statements on the being raped in her book, Not That Kind Of Girl, with alleged rapist "Barry" now starting a legal defense fund to respond to Dunham's mischaracterizations and potential, flat-out lies,) the facts aren’t there because they were purposefully avoided. In a situation like this, the appraiser has to dig deeper, and conduct the legwork that the original author did not, could not or refused to do.

Jonah Goldberg of NRO is one of those appraisers. He looked at the evidence in the RS story, ever mindful that the subject matter was dark and awful (We are talking about rape. Rape is not a crime of sex; rape is a crime of violence. It's about subjection and dominance and power and inflicting pain. There are few things in this world that match the sickness of the violence of rape,) and said, "It is not credible. I don't believe it."

Reputation Capital is hard to get back once you blow it on a bad investment. Kohn and Marcotte and other buyers of the narrative paid a high price. They lost.

As we have all seen too many times, those who lose don’t always admit defeat. The Narrativist, now feeling desperate, will attempt to salvage their hemorrhaging Reputation Capital in two ways; saving face or doubling down.

RS made an attempt at saving face. They threw "Jackie" under the bus, stating, "In the face of new information, there now appear to be discrepancies in Jackie’s account, and we have come to the conclusion that our trust in her was misplaced."

This was before they changed their apology statement to omit that key line. RS failed to engage in journalism on every level, and then blamed the woman instead of themselves. RS is invoking the Marion Barry Defense, claiming, "The bitch set me up!" Just an example of the desperation the Narrativist feels right now.

Rolling Stone has damaged their already spotty reputation in a massive way. Depending on the length of our own memories, future Rolling Stone stories will be met with resistance; a further examination of the facts will be necessary, and quickly, before the story is acknowledged as valid and worthy of discussion.

Yes, they tried to save face, but they also admitted their failure and to their mistaken obedience to ideology and narrative. This is stunning, and, yes, we should applaud it. Admitting the fraud vindicates Goldberg and the others who researched and worked this story. They deserve just that.

So Rolling Stone tries to save face, poorly. But we still have all of these buyers of the Rolling Stone/Jackie narrative who now have a worthless product; it no longer has the backing of the manufacturer, no more support will be offered from the parent company. Those who bought the product can either take their losses, or try to find a secondary market to peddle their now exposed vaporware.

The secondary market is opened when they double down.

Kohn, who attempted to vilify Goldberg for even questioning a rape story, stated on Twitter, "Wow, @JonahNRO, I’m curious when you last demanded that reporting on a burglary be independently corroborated by other outlets? Or a murder?”

Amanda Marcotte moved her forsaken product to her dwindling pseudo-feminist market, pondering, "Interesting how rape apologists think that if they can “discredit” one rape story, that means no other rape stories can be true, either."

Melissa McEwan (who most would be unfamiliar with, but no less has a market based on her website which she describes as a “progressive feminist blog about politics, culture, social justice, cute things and all that is in between”) posted, “I can't state this more emphatically: If Jackie's story is partially or wholly untrue, it doesn't validate the reasons for disbelieving her.”

No one who investigates the truth of a story or comments on how these stories are bought and sold is supporting or condoning rape. To say otherwise is yet another example of the desperation of the Narrativist.

Rape is an awful, disgusting crime. Those who are real victims should call their local authorities and get help. Not tomorrow. Today! The National Sexual Assault Hotline can be reached at 800-656-HOPE

Some Narrativists will take issue directly with Rolling Stone (like columnist Jessica Valenti, who eloquently exclaimed, "Well fuck you very much, @RollingStone.) RS will be accused of selling out women, and making it more difficult for rape victims to report what has happened to them.

This is potentially true, as Crystal Gail Mangum did when she accused members of the Duke lacrosse team of rape near a decade ago. Lying about rape happens, and accusing an innocent person of rape is horrifying.

Those who purposefully falsify a charge of rape should deal with stiff and severe punishments. Actual rapists should be thrown in jail and never let out.

As Goldberg states, the story of "Jackie" and UVA was, "...one of those stories too useful to verify." The marketplace for narratives over facts is strong, and the buyers will come running to the purchase the new goods. Narrativists Kohn, Marcotte and McEwan will have less people they can sell to, but they'll sell nonetheless. Hoping beyond hope to build back their Reputation Capital, and keeping a closer eye on the Narrative Value.

As their capital goes down, the market for real journalism and fact-based stories rises. Thank goodness for the appraisers.