Indiana Is A Secret Border State 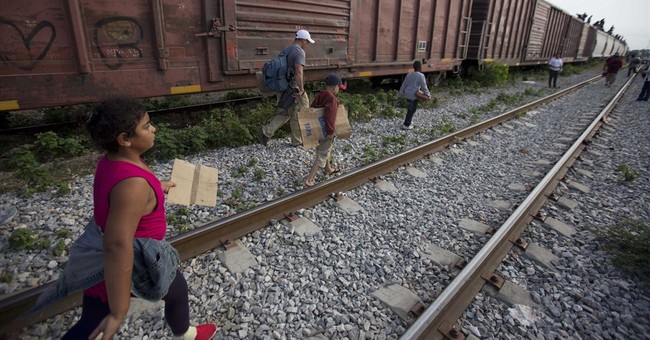 Reps. Andre Carson (D-IN 7th) and Todd Rokita (R-IN 4th), Senators Donnelly (D) and Coats (R,) Gov. Mike Pence (R) and the rest of the elected officials in the Hooiser state must be held to account. Or, at the very least, held to hold a press conference openly asking President Obama what the hell in the name of all things good, decent and holy is going on?

When broaching the issue of the border - where some 60,000+ children have been abandoned by parents who are willing to let their kids die crossing the Rio Grande instead of putting their own lives on the line to storm the capital cities of Honduras or El Salvador, remove their current leadership and institute governments that aren't inherently and generationally corrupt. - anything that doesn't call for kisses and hugs and teddy bears and free lawyers for those here illegally is considered racist.

(Because of the previous paragraph, the editors from (insert Leftist rag website here) are writing about me as we speak. I expect a dozen or so 'Tony Katz Is A Racist' headlines, in the same way I expect sex with Lady Gaga will leave her partners with a burning sensation when they pee.)

To the conversation of teddy bears, there was nothing wrong with Glenn Beck - with his own money and the money of those who were so moved to donate - giving out water and food and, yes, teddy bears, to those currently in shelters and awaiting "processing." I do contend that Beck's act was an act of kindness, not compassion. Compassion for people fleeing an oppressive hell is to put an end to their oppressive hell. But teddy bears are nice.

I stated on my daily morning radio show that every state is a border state. (I didn't come up with the line, but it is nonetheless true.) I predicted that if illegals could be shipped to Arizona or California or Massachusetts or Connecticut, clearly they could be brought to Indiana.

And now they are here. 245 from what we know, with sponsors we do not know near anything about.

Too many have called the situation on the border a humanitarian crisis. I agree, but it is not solely about those kids and those gang members doing their recruiting and those drug cartels using the kids to keep the border patrol busy while they push more drugs into the nation (all of which is horrible.) The humanitarian crisis is how left-leaning elected officials (and some right-leaning officials) in the United States of America care so little about the citizens of the United States of America.

How many names were the people of Murietta, California called for standing up to the buses, refusing to allow the unanswered questions to be dumped in their kid's playgrounds, in their kid's schools, in their kid's streets - all of which are paid for by their taxpaying, citizen parents? Because some anti-America, pro-racist La Raza member screams incoherently about no borders and racism, citizens of Murietta should be forced to give up their rights; their right to protest, to have secure borders (like Mexico has - just ask Andrew Tahmooressi) or to have the ability to protect their children?

According to the Indy Star, state Senator Brent Steele (R-Bedford) got into trouble (and created a mix-up) when he sent out an email saying that no illegal invaders have been "dumped" in Indiana. Gov. Pence's office quickly sent a correction, saying that the federal government only agreed to let the Governor know if a detention facility had been set up in the state.

As reported, two of Sen. Steele's colleagues were upset by his choice of words:

“Where is our humanity?” said Rep. Charlie Brown, D-Gary. “I am kind of disappointed in Senator Steele.

Sen. Steele responded: “Oh, to hell with people,” he said. “They’re being too damned sensitive. I think our federal government has treated them like trash, frankly,” he said. “As long as Obama does it, it seems to be OK. It’s not OK with me. I worry about these kids.”

I've never met Sen. Steele, but I look forward to the chance to shake his hand.

Being opposed to the term "dumped" is the only proof you need to recognize those who are incapable of defending a nation or properly representing their constituents. These unworthy politicos exist in every party. They need to be thrown out of the offices they somehow got a hold of, and quickly.

Rep. Brown, unbeknownst to him (I imagine,) has asked the key question; "where is our humanity?"

Towards the children at the border, abandoned by their parents and failed by their corrupt governments, it has been shown to be flourishing time and time again; day after day as our border agents do their laundry and feed them. It is shown by those - like myself - willing to adopt them (I will adopt a child on the border today under one condition; the "parents" are never allowed into the US and can claim no right to the child ever under any circumstance. Child abandonment is a sin...regardless of your religion or even your belief in God.)

Towards Americans the concept of humanity has been shredded. Politicos, celebrities and TV talking heads are all willing to slander and belittle American citizens in the name of five more minutes of air time, 50 more followers on Twitter and the hope of future campaign contributions.

Indiana should not be forced to accept illegal invaders. Hoosiers should not accept it as a given. They deserve answers to their questions, and have the right to protect themselves and the ones they love. Elected officials must be held to account. Our humanity - and our Republic - depend on it.