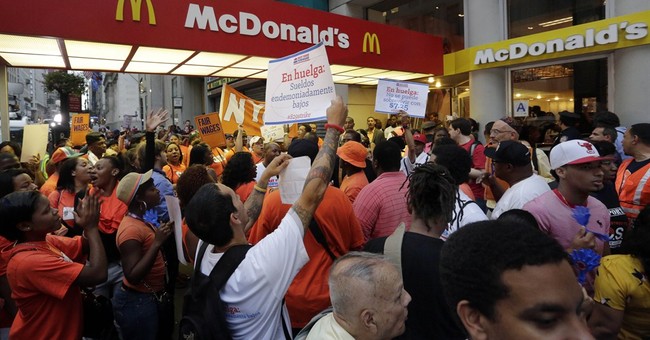 Fast food workers are planning a strike to force employers to pay them $15 per hour. This Thursday, in over 100 cities across the nation, Big Labor is coordinating with "grassroots" activists to pressure these employers to pay a "living wage." From all the press, you'd think the push toward higher wages was something noble. But, this is Big Labor. And no one will bully, threaten or intimidate to steal your hard earned money more than Big Labor.

The group Fast Food Forward, one of the organizations in sync with Big Labor to shame fast food restaurants into extinction, states their purpose:

In America, people who work hard should be able to afford basic necessities like groceries, rent, childcare and transportation. While fast food corporations reap the benefits of record profits, workers are barely getting by — many are forced to be on public assistance despite having a job. Raising pay for fast food workers will benefit workers and strengthen the overall economy.

The idea of a living wage is a fantasy. It's a myth. Like the Chupacabra, or a working Healthcare.gov website or that Lindsay Lohan is an actress. It's based on an idea that a certain amount of money, per hour, will make everything better. In this case, the elitists decided on $15 per hour.

Or, I could be totally wrong! The healthy person might live in Los Angeles while this sick person lives in Tulsa. The mother of two may be a better money manager that that single person, who uses their spare cash to buy drinks at local bars. It's not out of the realm of possiblity. It's not like some who were driven from New Orleans after Hurricane Katrina used their FEMA payments to pay for lap dances, right? Personal responsibility plays a huge part in the amount of money people need to "live."

There is no way to determine a living wage anywhere in America. It's a lie, and so is the idea that groups like Fast Food Forward and Big Labor care about fast food employees. Listen up, fast food workers, because you're being used! Not by McDonald's or Wendy's or Chick-Fil-A, but by Big Labor and the political candidates (ideology) they support. BIg Labor wants you to unionize because Big Labor wants you to pay union dues.

They want your money, and they don't give a good holy damn about you!

No one, anywhere, deserves more money at the expense of someone else. People can earn more money, and they should follow whatever path is necessary if earning more money is their motivation. Use jobs like these to learn the skills necessary to find other employment. Use jobs like these to work your way up the corporate ladder. Or, find another job. (Difficult, I know, in the Barack Obama economy; The same economy that has some people working these jobs because there are no other jobs. A difficult Catch-22 that a good 2014 election might actually fix!)

But don't expect fast food restaurants to give in to Big Labor's mythical demand of $15 per hour. And never think that striking for it is noble. You're not striking for your rights. You're participating in a shakedown.

For the rest of us, Thursday is a good day to treat yourself to some fast food. Fill the drive-thrus. And be patient. Some fools will actually strike, and things may run a little slower than normal. For those who don't strike, and don't give in to Big Labor's bullying tactics, say thank you. And, if you can, offer them a job. Because they're the one who understand hard work, and are working to create their opportunities.