Europe Asks, Does Tomorrow Belong to Us? 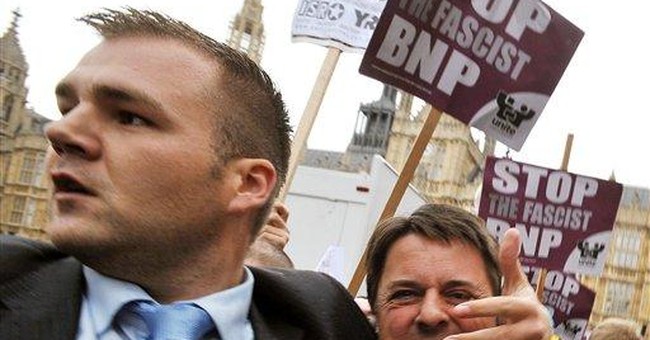 Last weekend's European Parliament and British local county council elections were not only a victory for the center-right over the center-left but also, more significantly, an indication of the growing rejection of the past 60 years of denationalized and consolidating European history. They were, particularly, a sharp assertion by many indigenous Europeans that they will not put up with losing their culture to overly assertive Muslims or other immigrants.

The latter point was made most emphatically by the voters of the Netherlands, Hungary, Finland, Britain, Austria, Denmark and Italy.

In the Netherlands, Geert Wilders' anti-Islamist, libertarian Freedom Party received 17 percent of the vote and four of 25 Dutch seats in the European Parliament. In Hungary, the center-right Fidesz Party trounced the Socialists (56-17 percent). The government-aligned Liberals were eliminated, with 2 percent of the vote, while the anti-immigrant, hard-right Jobbik won 15 percent of the vote and three seats in the European Parliament. Jobbik's leader, Gabor Vona, claimed that the "national front" was born Sunday and that they would "take to the streets" to urge early national elections.

In Finland, the anti-immigrant, Euro-skeptic True Finns Party garnered 10 percent of the national vote (up from 0.5 percent in 2004), while its leader, Timo Soini, received 130,000 votes -- the most of any candidate from any party. The True Finns have been talking openly about the problems mass immigration has brought to Finland, and in a breakthrough, the current prime minister, the Centre Party's Matti Vanhanen, has admitted publicly that bringing up those problems cannot be construed as racist.

But the loudest vox populi was heard in Britain, where Nick Griffin's British National Party won two seats in the European Parliament (with about 8.5 percent of the vote) and picked up several important county council seats in the simultaneous British local election, with about 7 percent of the vote. The anti-Islamist BNP is a former neo-Nazi party. It partially has disowned that past and recently has reached out to the Jewish community, but it is still explicitly a party that only indigenous British people (mostly Celtics and Anglo-Saxons) may join. If one considers the BNP currently to be a fascist party (it clearly is a racialist party, but it does not embrace the term fascist), then this is the first time that a British fascist party has won a seat in a parliament. Even Sir Oswald Mosley, a British fascist leader in the 1930s, never accomplished such an election.

Overall in Britain, the governing, scandal-ridden Labour Party collapsed to 16 percent of the vote, with the upstart non-racist but anti-EU United Kingdom Independence Party coming in at 17 percent and the Tories at a barely respectable 27 percent (and that only after last week quitting the right-of-center European People's Party and joining a Czech and Polish Euro-skeptic bloc in the European Parliament).

The UKIP's stated purpose is that the United Kingdom "shall again be governed by laws made to suit its own needs by its own Parliament, which must be directly and solely accountable to the electorate of the UK."

Sunday night, the BNP's Nick Griffin claimed his party's victory as a vindication of the party's claim that "we're here to look after our people because no one else is." He went on to condemn the "liberal elite, which has built a dam, a wall of lies, which has grown ever taller and ever thicker over the years to stop ordinary people protesting about the removal of their freedom." He added, "Well, tonight that wall has been broken down."

In a conventional British election, the Labour Party's collapse would have resulted in a Tory triumph. But in this election, about 1 in 4 Britons did not vote Labour, Tory or Liberal. Rather, they voted for the unprecedented combination of the UKIP's respectable (but, until recently, eccentric) call for the absolute legal sovereignty of Britain and the BNP's disreputable -- but listened-to -- racial and cultural scream.

I warned -- after coming back from extended field research in Europe (yes, drinking was involved) for my 2005 book, "The West's Last Chance" -- that if the respectable political parties did not address the growing, legitimate concern of indigenous Europeans to protect their culture from being overwhelmed, disreputable parties would arise to answer that call.

Now, with last weekend's election, we are beginning to see the breakout of such political impulses. Not all the parties are disreputable. I have met with Geert Wilders, who is a courageous, decent Dutch patriot. He only stepped up to the challenge when, in 2003, as a local official, he made the commonplace observation that Yasser Arafat was a "terrorist leader." This drew a death threat and the subsequent arrest and conviction of a Dutch Muslim, identified as "Farid A.," who warned, "Wilders must be punished with death for his fascistic comments about Islam, Muslims, and the Palestinian cause." To this day, Wilders travels with very heavy Dutch security.

Europe has long experienced single-digit fringe votes of the left and right. But as the hard-edged BNP approaches 10 percent -- and only slightly milder other parties approach 20 percent -- the historically volatile European mix of nationalism and race may be building once again.