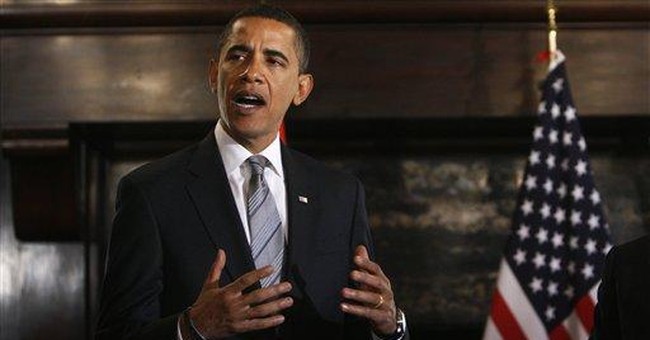 It was fairly common chatter from congressional Democrats in Washington during the autumn months of the presidential campaign that while Barack Obama was almost certain to win, in 2009 policy would be driven from the House speaker's office. While I didn't doubt that the congressional Democrats would try to lead Obama around by the nose, I rather doubted that Obama would cooperate. When a fellow gets himself elected president, he is inclined to want to try his hand at some real governing.

And while I predicted in a postelection November column -- against conventional wisdom -- that Obama might well have a fairly short honeymoon, I confess I am surprised at how soon, how vigorously and how publicly the congressional Democrats are flexing their muscles.

In the past two weeks, Senate Majority Leader Harry Reid, Sens. Dianne Feinstein, Jay Rockefeller and John Kerry and Rep. Barney Frank, among others, have fired significant shots across President-elect Obama's bow. Moreover, as well reported, Rahm Emanuel and Vice President-elect Joe Biden were informed a few weeks ago that they would not be permitted to attend the weekly Senate and House Democratic Caucus meetings -- contrary to the custom with Republicans, who invited Vice President Dick Cheney, Karl Rove and a few other senior aides to their caucus meetings.

Why, after waiting for years (arguably decades) for such complete political power, are the congressional Democrats so cranky and turf-conscious so early?

On the one hand, it would seem that congressional Democratic resistance is increased the more Obama asks for big change quickly. He may well not understand how hard it is to move big, detailed legislation through the congressional process. Obama's expectation that Congress could authorize and appropriate almost $1 trillion in only three or four weeks was never realistic. It is hard, even in Washington, to get a majority to quickly agree to spend the same trillion dollars.

His speech Thursday clearly was seen as a shot across the bow of the congressional Democrats to get on with his stimulus package quickly. While I have noted some Republican complaints about Obama's partisan slap at Republicans' bad policies these past eight years, it is the Democrats who seem to have their noses out of joint from the speech more than do the Republicans.

Consider the sequence: First, Obama proposes his stimulus plan in general terms; then the Democrats disagree with important pieces of the bill; then Obama goes on national TV and tells Congress (i.e., the Democrats) to hurry up and get the job done; and then Sunday morning in The Washington Post, there is a report of increased Democratic resistance to Obama's policy leadership. And Obama hasn't even been sworn in yet.

The media have been focusing on how wonderfully Obama is ahead of previous presidents in selecting appointees and introducing domestic plans during his transition -- which is true. But what really may be happening is that his early substantive policy stands combined with his early appointments of Cabinet and sub-Cabinet positions (for each appointment, there may be a half-dozen or so Democratic senators disappointed that Obama did not pick their candidate) may be truncating his honeymoon with the legislative branch of government.

Moreover, while his quick and peremptory policy announcements have ruffled some congressional Democratic feathers, his backing away from pre-election liberal stands may be ruffling other Democratic fowl.

For example, on Sunday television, Obama was asked to respond to this Cheney advice to Obama: "Before you start to implement your campaign rhetoric, you need to sit down and find out precisely what it is we did and how we did it. Because it is going to be vital to keeping the nation safe and secure in the years ahead, and it would be a tragedy if they threw over those policies simply because they've campaigned against them."

Obama responded: "I think that was pretty good advice, which is I should know what's going on before we make judgments and that we shouldn't be making judgments on the basis of incomplete information or campaign rhetoric. So I've got no quibble with that particular quote. I think if Vice President Cheney were here, he and I would have some significant disagreements on some things that we know happened."

Notwithstanding that last sentence, I suspect that liberals bristled when they heard Obama essentially concede the possibility that his campaign opposition to Cheney's national security policies (implicitly including waterboarding, CIA renditions, Gitmo, the Patriot Act, NSA electronic surveillance, etc.) was just "incomplete information or campaign rhetoric." It was all a little vague, but conceding that Cheney -- the devil in liberals' minds -- may be right must have been off-putting.

It seems that the first -- and pre-inaugural -- bites out of the presidential hide are on Obama's left flank.