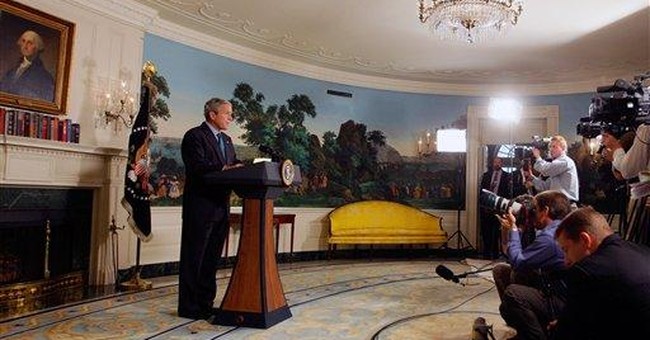 There is nothing new under the sun. The United States has endured major financial panics in 1837, 1873, 1893, 1907, 1929, 1933 and now in 2008. Most of these economic events had ideological and political consequences -- as well as the inevitable economic play-outs. And if history is any guide, contrary to the hope of some and the fear of others, this is not the end of capitalism as we have known it.

But it is true that usually, major economic events have had political as well as economic consequences. For instance, the panic of 1893, which in some ways is similar to the current panic, was caused by overbuilding and sloppy financing of the railroads. The 1880s enjoyed dramatic economic expansion, which led to dangerous speculation. Once the railroad bubble burst, there was a run on the banks, a contraction of credit, and European investors demanded gold for payments, which forced the reduction in the value of the dollar.

Unemployment went from 3 percent in 1892 to 18 percent in 1894 -- not returning to single digits (6.5 percent) until 1899. Many out-of-work middle-class citizens failed to meet their mortgage obligations, abandoned their homes, and moved west. That was the end of the Gilded Age. After years of close presidential elections, McKinley's decisive victory in 1896 -- fought out over economic issues -- brought on political realignment and the beginning of the Progressive era. With the exception of President Woodrow Wilson from 1913-1921 (who won in 1912 only because Teddy Roosevelt split the Republican vote), Republicans controlled the White House from 1897-1933.

If economic events affect politics, it is also true that political events often have economic consequences. For example, the fall of the Soviet Union two decades ago deeply compromised the credibility and appeal of government-managed economies. As a result, throughout the world -- and particularly in the United States -- the past two decades have seen deregulation and a respect for market forces flourish. Not only Marxists but also conventional big-government democratic liberals in the West consistently lost the policy arguments to those of us who argued for a more vigorous, deregulated and freewheeling capitalism.

Those abiding and ever-true principles of economics will be tainted for a while by recent economic events. Now waiting in the grass to leap up and champion the cause of anti-free markets are the left two-thirds of the Democrats here in America, our mainstream media, the socialists and regulators in Europe, and the Mussolini-style corporatists in Russia, China and perhaps in America, too.

We had a taste of this urge for fierce regulatory recrudescence Sunday evening with the words of Democratic Rep. Rahm Emanuel, who warned, in calculated tones of inflamed class resentment, that once the Democrats save the day, they will ensure the end of deregulated markets (although after leaving Clinton's White House staff, he took a position at the investment bank Dresdner Kleinwort Wasserstein in Chicago, where he worked from 1999 to 2002 and reportedly earned $18 million).

Last December, in somber rather than triumphant tones, leading conservative economic commentator Martin Wolf, of the British Financial Times warned, "What is happening in credit markets today is a huge blow to the credibility of the Anglo-Saxon model of transactions-oriented financial capitalism." As Wolf's further words have been characterized, when the crisis hits (as it now has), "That will certainly mean the end of the neoliberal consensus that has dominated politics for almost a generation." Or, as Newsweek's Howard Fineman wrote recently in more informal words, "The era of cowboy capitalism has died, largely of self-inflicted wounds."

I don't take those words as prophecy, but they are certainly shrewd warnings of the political things that may come. And it is true that it is harder this week than it was last week to argue persuasively for pure free-market principles if one has endorsed the $700 billion bailout and partial nationalization of the credit industry. (And I do emphatically endorse the bailout as the only available and preferable alternative to the calamitous economic status quo.)

So in the months and years to come, it falls to those of us who advocate for free markets to persist in making our case. It is true that momentary events likely will cloud the public's judgment and provide nefarious opportunity for statists and other political hustlers. But it is also the truth, which is vouchsafed by any fair reading of history, that excessive regulation and taxation -- which means political management of private property and previously free markets -- are inherently corrupt and inefficient. Prosperity and the dignity of human freedom are two sides of the same coin. It is an old lesson that now must be retaught and relearned. And it shall be.