Gosh, I Love the Liberal Media 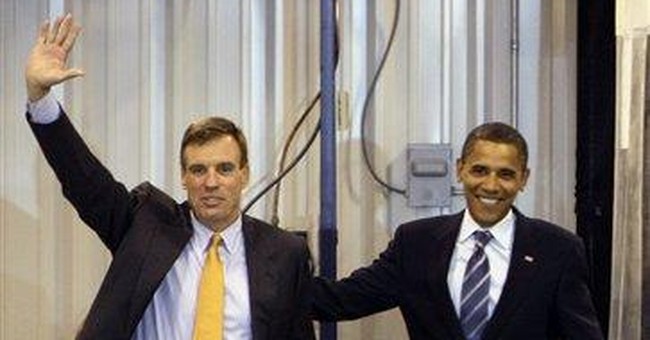 There is so much change in the world. I don't know whether Michelle Obama thinks America is "downright mean" and not a country of which she is ever proud (except as it loves her husband) or whether, as Monday night, her heart is all aflutter at the flapping of Old Glory -- when she is not being a sister to her brother, a daughter to her mother, a mother to her daughters, a wife to her husband and oh, yes (though not mentioned Monday night), a $300,000-a-year employee of a Chicago hospital so closely connected to Obama and his public relations firm that it would need their finest surgeons to separate them at their shared pockets.

I'm all in favor of trying to make change my friend, although it's not likely to be a lasting relationship. But I confess that a little stability can be a comfort, also. And that is why last Saturday morning was such a comfortable time for me. When I turned the TV on, the political cable shows were filled with liberal pundits, liberal anchors, liberal guest historians, liberal weather gals and guys, liberal news-you-can-use chicks and liberal political "strategists" (i.e., out-of-work former Democratic National Committee gofers). What a relief; nothing had changed.

And of course, all of the above immediately went about their predictable chore of transforming Biden from what he is to what Obama needs him to appear to be. Sen. Biden is, in fact, a genial and much-liked Washington insider with a tendency toward mild racial and ethnic stereotyping, a six-term senator, a fixture of Washington politics, and a cheerful swimmer -- with the rest of us -- in the great Potomac swamp. He is one of the biggest, oldest and most toothful of the alligators whom Washington outsiders regularly promise America they will leave high and dry after they have drained the swamp.

So every liberal "expert" on TV Saturday morning spontaneously asserted that Biden is no Washington insider because he commutes an hour by train home most nights. His heart is "back home in Delaware." This is a most preposterous, risible farce of a lie. So naturally, each and every one of the liberal media repeated it straight-faced and very earnestly. It warmed me to see my old reliable liberal moron media thinking they were fooling the public when they said in the same breath that a six-term senator and chairman of the Foreign Relations Committee is no Washington insider. Even we simple sons of the soil (I own a small gentleman's farm) could see through that howler.

The next endearingly obvious lie was that Biden is not really from Delaware (a small, reliable Democratic state), but rather from Scranton (in Pennsylvania, a big swing state), even though Biden left Scranton as a young child, at about the same age that Obama left Indonesia. (So why is Obama from Chicago and Biden from Scranton?) But because Biden had his nappies changed in Scranton (also the mythical home of Hillary during the primary season, I seem to recall), the moron media tell us he is really popular in Pennsylvania and will help carry the state for Obama. Except he never registered more than single digits in the Pennsylvania polls when he was running in the primary this season.

Even as the first polls registered the barest flicker of any public response to Biden's selection nationally -- he seems to generate a more tepid response from the public than Al Gore in 1992 or John Edwards in 2004 -- liberal media types were calling the selection a masterstroke, the best possible choice.

Nothing against old Joe, but if Obama had selected a ham sandwich as his running mate, our old friends the mainstream moron media would be just as gushing and enthusiastic. ("By picking a HAM sandwich, Obama, in a masterstroke, has sent a dog-whistle message that he is not a Muslim, as Muslims abhor ham. The ham sandwich also will do very well in the agricultural Midwest, which is a great hog-farming region, thus bringing into play another 47 electoral votes. Also, the ham sandwich will help unite the party because everyone likes a ham sandwich except the religious Jews, and they are part of the 23 percent of Jews who already vote Republican. The ham sandwich compares very favorably with the other shortlist VP choices. Unlike Biden, the ham sandwich doesn't talk much and never makes a gaffe; it just goes about its business being tasty and nutritious. Unlike Sen. Bayh, the ham sandwich is not bland, particularly when you put a little Dijon mustard on it. And unlike Gov. Keane, the ham sandwich is no novice; it has been around for thousands of years.")