He Is Who He Is 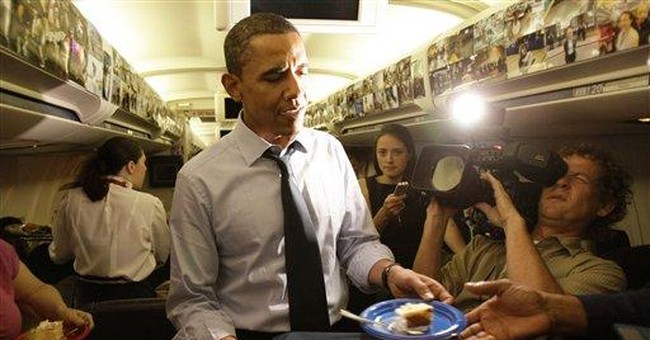 It's getting tricky to know how to refer to he who presumes to be the next president. It was made clear several months ago that mentioning his middle name is a forbidden act. (Pass out more eggshells.) Then, having nothing honorable to say, Obama warned his followers last week that Sen. McCain would try to scare voters by pointing to Obama's "funny name" and the fact that "he doesn't look like all the presidents on the dollar bills."

Now, putting aside for the moment the racial component of His warning, what are we to make of the "funny name" reference? Many people have "funny" names. Some people think my last name -- being very close in spelling to the adverbial form for the absence of content -- is funny. Certainly, former Arkansas Gov. Mike Huckabee's name is funny. Many on the left have had great fun with President Bush's last name. But we all have found our names perfectly serviceable and would expect people to call us by the names by which we identify ourselves.

But He has made it clear that the mere use of His name would be freighted with coded innuendoes of something too horrible to say straightforwardly. One has to go back to Exodus 3:13-14 to find such strict instructions concerning the use of a name. Moses explained: "Indeed, when I come to the children of Israel and say to them, 'The God of your fathers has sent me to you,' and they say to me, 'What is His name?' what shall I say to them?" And God said to Moses, "I Am Who I Am." And He said, "Thus you shall say to the children of Israel, 'I Am has sent me to you.'"

So perhaps we can call Him, for short, Sen. I Am (full code name: I Am who you have been waiting for).

Another aspect of the now-infamous dollar-bill incident that has gone unmentioned is Sen. I Am's choice of the dollar-bill reference itself. He could have just said He doesn't look like other presidents. Even that is a little too cute for the nasty little point He slyly was trying to make, but at least He would be identifying Himself merely with the universe of American presidents. But His overweening pride found such company too base and demeaning for Him. So He needed to include Himself in the grander company of George Washington, Abe Lincoln, Jefferson and perhaps Andy Jackson. (I doubt He had in mind Woodrow Wilson on the $100,000 bill or Grover Cleveland on the $1,000.)

Perhaps I shouldn't dwell on these matters, but the more I watch this man the more stunned I am at His overconfidence and towering pride. I have known a number of great and powerful men (and read biographies of many more), and they surely don't lack confidence or ego. But who among the great would have answered the question posed to the junior senator from Illinois a few weeks ago as He did? Asked whether He had any doubts, He said "never." Is He so foolish as to think He has the world figured out to the last detail, or is He so proud of His intelligence that He cannot confess to ever having any doubt? Either explanation renders His judgment of dubious presidential caliber.

Here is a man who talked almost contemptuously of Gen. Petraeus. Explaining His differences with the general, He said that His "job is to think about the national security interest as a whole; (the generals') job is just to get their job done (in Iraq)." Of course, right at the moment, the junior senator from Illinois doesn't yet have "His" job, while Gen. Petraeus, as confirmed Centcom commander, has direct responsibility for both Afghanistan and Iraq and everything in between and around them. But in the mind of Sen. I Am, He already is, while He thinks the man who is perhaps our greatest general in two generations is just another flunky carrying out routine orders. It is repulsive to see such a mentality in a man who would be president.

All of us have our shortcomings, of course. But there is none so dangerous both to a man and to those for whom he has responsibility than the sin of pride. In the sixth century, Pope Gregory the Great recognized that pride breeds all the other sins and is therefore the most serious offense. St. Thomas Aquinas reaffirmed that pride is rebellion against the very authority of God.

Let me quote a private e-mail correspondent, who states the case better than I could: "Pride indeed is the cardinal vice -- it swings open the door to most of the other theological vices, and undermines the classical virtues of prudence, courage and justice. It thrives, not on what one has, but on what others do not have. And even when one has diligently practiced the most admirable virtues, there always lurks the danger that at some moment one will look in the mirror and say: 'Oh my! What a wonderful person I am!' Thus does the vice lunge from its hiding-place."

For a man, his personality is his destiny. If he becomes president, his flaws become the nation's dangers. The voters must judge carefully both the personalities and the ideas of those who would be president.

Leah Barkoukis
Gloria Borger: Hearing Trump Talk About the Election was 'Frightening'
Cortney O'Brien
How the Commission on Presidential Debates Reportedly Plans on Having More Control Over Candidates
Leah Barkoukis