An Ominous 2008: Journalists and Voters To Regret Their Decisions 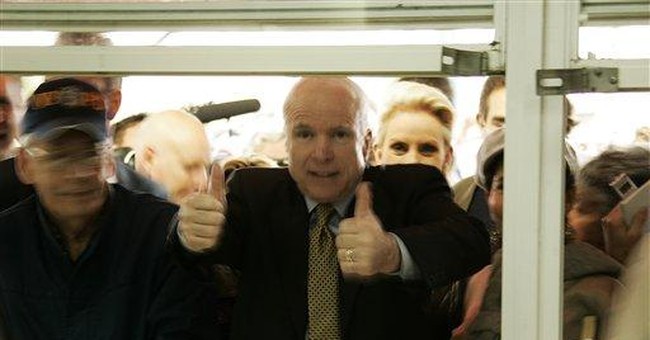 As I write this, it is about 15 degrees outside my Virginia farm. Nonetheless, my llamas and sheep, deep in snow, seem perfectly cozy in their winter woolens; the peacocks are in their feathered wintered invulnerability to cold; the horses are in their winter hair and indomitable spirit; my cats, all curled up and sleepy; the dogs, slumbering by the fading embers of the fireplace. The Lord provides for his children. But we Republicans shiver in the cold and brace ourselves for the hard winds yet to come.

In the aftermath of Sen. McCain's South Carolina victory, it can only look like the worst of times for the Grand Old Party. Like most Republican regulars, I have been much put out by McCain during the past decade, but I could support him with a serviceable enthusiasm against the appalling Hillary. She is an egregious political cynic with a Eurosocialist polestar -- the worst combination for an old Reaganite such as I.

Obama is another matter. To all appearances, he is a mench: filled with personal integrity, high intelligence, wit and a complete inability to fake all those sentiments that winning politicians rely on to dupe the public. How he stumbled onto Walter Mondale's political philosophy is beyond me. I suppose the gods, having granted him so many favors, decided to deny him just enough to put his otherwise effortless rise to acclaim in doubt.

He seems to me on the precipice of defeat. As I predicted last week, the Clintons' race politics have polarized the Hispanic vote against Obama (he lost it about 3-1 in Nevada). Meanwhile, working-class (and other) women, in a dreadful moment of self-loathing Evita-worship, are flocking to the distaff Hillary banner. This bodes ill for Obama and, I would point out, for her Republican opponent in the fall.

There is little uglier in democratic politics than playing one aggrieved minority off against another. But Bill Clinton, the Mephistophelean conductor of the political body symphonique, has summoned demographic counterpoint melodies. While we all pray that the devil's baton ends on a sour note for the conductor, the discordant symphony it raises may well blare loudly for a season or two.

Michael Huckabee's close loss in South Carolina (a state oddly named after English King Charles II, who is known to history as an opponent of vehement Protestantism) probably bids adieu to his current presidential aspirations -- but not to his place as a political comer in the coming Republican chaos. But for Thompson's McCain-friendly efforts to grab 20-plus percent of the conservative Christian vote, Huckabee would have won a comfortable victory in South Carolina. Now that Thompson has dropped out, Huckabee could have a clean shot at 60 percent of the evangelical vote -- if he doesn't run out of money and steam.

If Giuliani and Romney each can hold at least 20 percent of the vote, it still will be a four-way fight right down to the convention. If Giuliani and Romney slump, it will be McCain's to lose. (I am prepared to take up smoking again if we have a brokered convention with smoke-filled rooms). I tremble not only for my party but also for my country at the thought that our nominee will have to overcome the irrational pleadings of the Democrats to win the day.

If economic times are hard, the Democrats will argue that we should suck all the potency out of the economy and redistribute it to the least economically efficient. They will argue for subsidizing inefficient alternative energy sources that will bankrupt us before it will power us. (Caveat: Being rational, I represent oil and gas producers, who will produce about 80 percent of our energy if we let them. If we don't let them, I look forward to galloping past the Democratic commuters on one of my fine horses on the way to work.)

If the candidates in both parties are stumbling inelegantly down the election path, the mainstream media are hardly covering themselves in glory. Particularly amusing was last weekend's "reporting" of how Bill Clinton is off the message requested by the Hillary for President team, and how both Hillary's and Obama's surrogates were freelancing their racial attacks on each other. Of course, both campaigns are frantically spinning these fairy tales, but the willingness of the media to report that spin as truth is disgraceful.

I have worked on many campaigns. Senior surrogates are assigned, among other things, the job of delivering the nasty but necessary bits of a campaign's message matrix. Campaigns try to avoid having those words (such as those appealing to race) come directly from the candidates' lips. Fine. That's politics. But for the media to "report" that Hillary and Obama didn't want those words delivered is not fine. And it's not journalism; it's flacking for the Democratic Party.

But more importantly than noting the media's complicity in carrying a Democratic Party message (what's new with that?), Hillary Clinton must not be permitted to get off the hook she placed herself on when she played the race card. It is one of the low points of presidential politics in modern times. It is genuinely shocking. Honest commentators should make a big and continuing deal about it.