Tom Tradup
|
Posted: Feb 03, 2021 12:34 PM
Share   Tweet
The opinions expressed by columnists are their own and do not necessarily represent the views of Townhall.com. 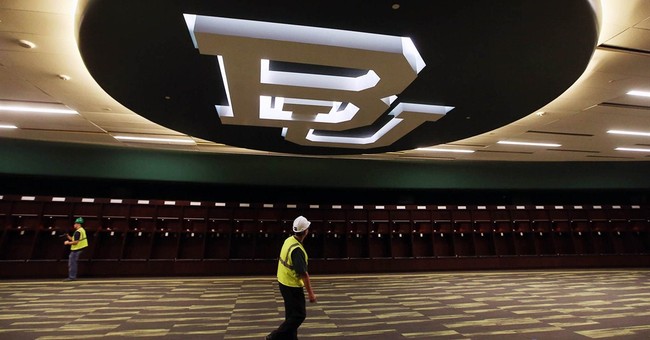 Universities are a lot like gardens. Properly planted and carefully cultivated, they can produce inspiring growth that enriches society for years. But for gardens to flourish, pruning must allow for new growth. A common mistake for green gardeners, however, is to inadvertently mistake a thorny bush for an unwanted intruder. In this vein, some students of Baylor University have sought the removal of their garden’s centerpiece on the basis of how “uncomfortable” it makes them feel.

The last time I zeroed in on Baylor University in Waco, Texas in July 2020, the institution’s administration and faculty had started the ball rolling, placing Baylor well on the road to transformation from a once revered Christian university to a “politically-correct” but obscenely expensive version of their state school counterparts.

Since my last column, outrageous events on the Waco campus included last September’s placement of “Sensitive Content” warning signs near a student-created display of American flags commemorating victims of the 9/11 terrorist attacks on the USA. The university acknowledged that it was a ‘moving display,’ though it defended the decision to place the sign since the flags might ‘evoke a wide range of emotions.’  And that required WARNING SIGNS?

Therein lies the next phase of deconstructing Baylor from an institution of higher learning to a comical Safe Space where bed-wetting snowflakes rule, encouraged by an administration (and, regrettably, a Board of Regents) to let their “feelings” overrule the adults who apparently exercise little or no stewardship over the university where they serve as caretakers.

Most recently, on February 1st—the 176th anniversary of its founding—a small group of students gathered beneath the statue of founder Robert Emmett Bledsoe Baylor to demand that it be removed from the campus which is named for him. Judge Baylor—an ordained Baptist pastor who by all historical accounts reluctantly accepted having the university named for him—was blamed by students for the campus not being racially integrated until 1963.

Student newspaper The Baylor Lariat quoted a student from Aurora, Colorado, who opined:“…so you have 118 years where there’s no Black people on this campus. I think that is significant because this campus was built not to have Black people on this campus.” (That would be true, but only if one absurdly assumes Judge Baylor had invented a time machine and transported himself 118 years into the future to be certain Baylor admitted no African Americans until 1963.)

However, based on these feelings and others from the tiny group gathered at Judge Baylor’s feet, his statue must be removed from campus so “students will see that Baylor is taking racial issues seriously.” (Always classy to kick and demonize a guy who died in January 1874 and isn’t around to defend himself.)

Some “woke” observers—including no doubt Baylor President Linda Livingstone PhD, the chief appeaser of the “feelings rule” crowd—may conclude that just removing Judge Baylor’s statue would be the fastest and easiest way to calm unhappy students. Au contraire, mon frere. The demonstrators added on February 1st: “Once we remove that (statue) from campus, then we can start removing …the rest of the stuff off the campus that makes us feel uncomfortable.” Good grief, here come the next Chief Content Officers at Twitter.

Call me crazy. Call me old fashioned. But there’s plenty in this world that makes me “feel uncomfortable” and I’m not sure the list can be contained in one column. Included are people who drive down the street alone in their cars wearing face masks…politicians who complain about walls and guns (but who are now hiding behind walls protected by National Guardsmen with guns)...and whiny college students who are empowered by spineless professors to demand we tear down statues and rewrite history because of their “feelings.” But hey, that’s life.  You gotta take the wheat with the chaff.

Baylor’s capitulation to political correctness is depressingly similar to what goes on at colleges and universities all over America. But unlike Baylor, they don’t claim to offer Christ-centered education. And most of them don’t send parents to the poorhouse charging $62,000 a year to indoctrinate their sons and daughters with Bolshevik claptrap, molding them into quivering masses of guava jelly anytime they encounter anything that makes them “feel uncomfortable.”

While there are definitely “thorns” in the biography of Judge Baylor (namely that he, as a judge, inflicted harsh sentences upon convicted slaves) there is also a litany of accomplishments to exalt. Judge Baylor was a congressman in his home state of Kentucky and then Alabama. He became an ordained Baptist minister and then a district and supreme court judge for the Republic of Texas. He was also a member of the convention which drafted the Texas state constitution. He additionally served as Baylor faculty teaching law without compensation. Sound familiar?

Universities should be teaching young people how to maximize their accomplishments instead of mining for singular complaints about great leaders long deceased. Judge Baylor was a builder of men, of Christians, of education, of institutions and of leadership. If something at Baylor needs pruning, I submit that it is not the fruitful and blossoming rose bush of Judge Baylor’s past, rather, it is the choking weeds of victimhood, offense and anger that fuel so-called progressivism.

Judge Baylor’s statue is not to blame for society’s problems. But myopic college administrators and Regents very well may be. Please join me in praying for Baylor University’s future.

Tom Tradup is VP/News & Talk Programming for Dallas-based Salem Radio Network. He can be reached at ttradup@srnradio.com