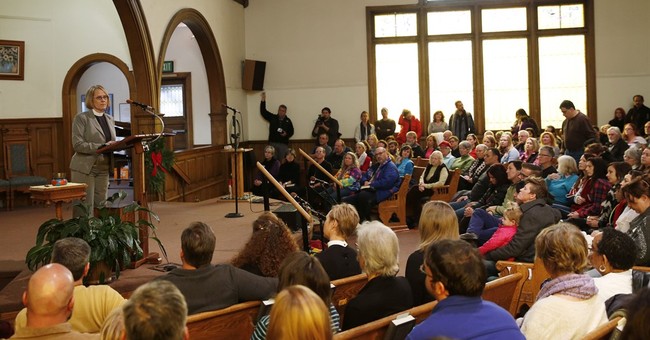 That's among the findings of a recent Pew survey, which determined that “the percentages who say they believe in God, pray daily and regularly go to church or other religious services have declined modestly in recent years.”

It's true that the majority of American adults — roughly three quarters — still claim a religion and are, more devout than they were a few years ago, finds Pew.

But there is a growing minority of American adults, mostly younger adults, who say they don't belong to any organized faith.

“Altogether, the religiously unaffiliated (also called the ‘nones') now account for 23 percent of the adult population, up from 16 percent in 2007,” reports Pew.

I'm glad I am not one of the nones. My parents made Catholic faith an important part of my upbringing.

Though I am far from the best Catholic, I still attend Mass and it still fills me with a calm and sense of meaning that I can't find anywhere else.

It is the place I go when new children are brought into my family and baptized. As a boy, I experienced the sacrament of Holy Communion and Confirmation — big events as we passed through important stages in our lives.

Christmas was special every year. At St. Germaine School, we'd put up decorations, sell items to raise money for the needy, attend Mass and practice for Christmas concerts. We'd sing real Christmas songs, too, such as “Silent Night” and “Hark! The Herald Angels Sing.”

My sisters were married in the church and the ritual and ceremony — the Catholic Mass, the music, the incense, the wine — gave their union greater meaning. When my parents and sisters married, they really did believe that they became “one flesh” with their spouses.

The church has comforted us through dark times. It is always tragic to lose loved ones, but the funeral rite consoles us and reaffirms our belief that the death of the body is not the end, but the beginning of everlasting life — particularly when my second cousin, Father Robert Miller, delivers his wonderful eulogies.

And when I attended Mass in Washington, D.C., the Sunday after the 9/11 attacks, St. Joseph's was packed beyond capacity as people sought comfort in the face of evil.

To be sure, my church is far from perfect — what some priests did to children is terrible and a huge blight that hangs over us still. But as I get older, and my flaws become more apparent, I want to go to church more. And I see that it is good for our republic, too.

The church promotes values that are good to have in a representative republic: prudence, temperance, courage and justice. It teaches us to avoid excessive pride, envy, gluttony, lust, anger, greed and sloth. These are the seven deadly sins — activities I usually save for the weekend!

It is better to be hot or cold than lukewarm, says the New Testament. Some of the nones, atheists and agnostics, are often “hot” as they actively try to seek truth. But the “lukewarm” nones are often wishy-washy and that is not good for a republic.

As traditional religion goes to the wayside, “religion” won't go away. Some will simply practice it in new forms: leftism, environmentalism, etc.

But don’t ask me, ask the great philosopher G.K. Chesterton: